The Day After: USA rallies to beat Turkey 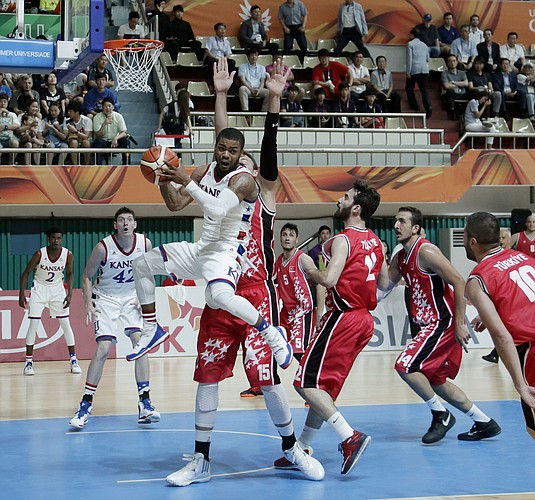 Kansas guard Frank Mason III, (0) passes out from beneath the basket in a Team USA 66-57 win against Turkey Saturday, July 4, in Gwangju, South Korea. by Mike Yoder

Turkey went on an 18-2 run midway through the first quarter, drilling seven straight shots for an 18-7 lead.

Afterward, it was all Jayhawks, as they ramped up the intensity on defense and Turkey never regained its offensive momentum.

SMU senior guard Nic Moore was the only other player with more than two points. He finished with nine points on 3 of 9 shooting to go along with three steals and two assists.

The Jayhawks had some good moments, especially defensively in the second half, and some not so good moments, when they struggled to shoot the ball. Turkey was an older team, but the Jayhawks showed their maturity by not panicking when they fell into a big hole in the first quarter and quickly climbed their way back. The opponents won't get any easier in this tournament, but it was a good sign for team USA that it found a way to win when a few players had off nights.

1 – After falling into an 11-point deficit in the first quarter, the Jayhawks stepped up defensively to get back into the game. Turkey finished with 20 turnovers, including 12 in the second and third quarters when the Jayhawks went on a few runs to take the lead. USA's top guards (Mason, Selden, Moore) provided strong pressure on the perimeter and the Jayhawks played well in the low post with the FIBA referees allowing a little more contact than what would be called in an NCAA game. 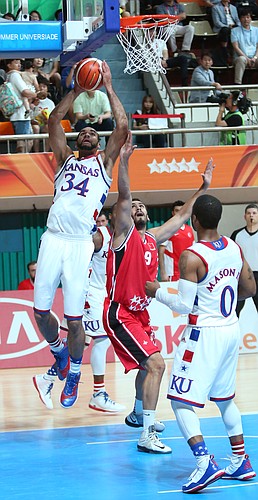 2 – If the Jayhawks are going to do well in the tournament, they are going to need big performances from their top players. Selden and Ellis did that on Saturday. Selden was in attack mode for most of the game, driving to the rim and he finished through contact on his way to 19 points. He looks in his comfort zone with two point guards on the court (Mason and Moore) and had no problems crashing the glass (nine rebounds). Ellis put up 17 points (11 in the first half) on 8 of 18 shooting. He said he was comfortable on the court and he looked the part. 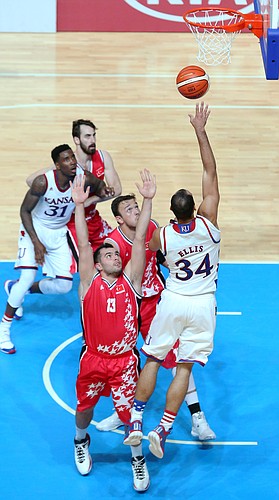 3 – On an off night, the Jayhawks found a way to win. KU doesn't have its full complement of players, missing likely key contributors this winter with Cheick Diallo, Devonté Graham, Brannen Greene and Svi Mykhailiuk out. But even without all of those guys, the Jayhawks showed poise after falling into that first quarter hole to come back and win.

1 – USA was sloppy in the fourth quarter on offense and kept Turkey around with only five points in the first five minutes of the final quarter. With a chance to put the game out of hand, the Jayhawks shot 5-for-20 (25 percent) in the fourth quarter and had five turnovers. They had some problems against Turkey's zone defense. Against the top teams, the Jayhawks will have to close the door better.

"We didn’t do a very good job against it," KU coach Bill Self said of the zone defense. "We haven’t practiced against a ton of zone. But we know what to do better now. That’s the way it works with a lot of teams. The best time to go zone a lot of times is when teams are trying to nurse a lead. Then they’re not aggressive, they don’t look to shoot the ball, the clock gets shorter and they end up going one-on-one trying to make the play. We’ll handle the zone better. I’m pretty confident about that." 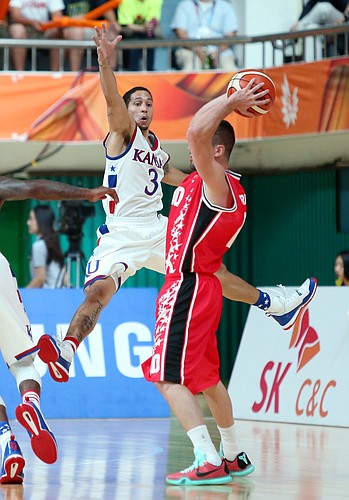 2 – The Jayhawks had trouble protecting the ball, committing 16 turnovers. Quite a few of those turnovers were just careless mistakes with the ball. On possession that wasn't a turnover in the fourth quarter, the Jayhawks had a 3-on-1 fast-break and didn't walk away with any points. If they struggle to shoot on the tight rims, they will have to limit their turnovers. 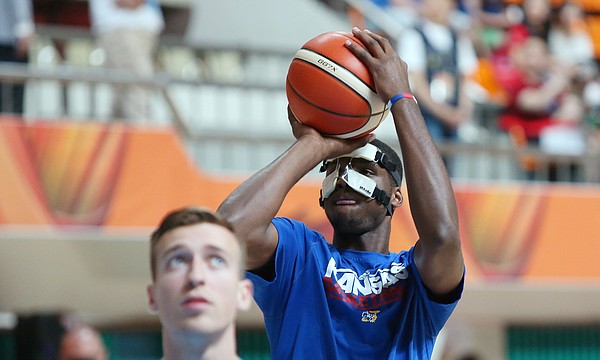 Kansas freshman forward Carlton Bragg warms up wearing a mask to protect his broken nose during Team USA warm ups at Dongkang College Gymnasium. The team was preparing for a game against Turkey Saturday, July 4 in Gwangju, South Korea. by Mike Yoder

“I thought our bench productivity-wise wasn’t great,” Self said. “But I though that (DeBose) gave us good minutes. I thought Lagerald did OK. I thought Carlton did OK. Every team needs guys off the bench to come in and make your starters better. I thought we did a decent job of buying time and that stuff.

“When we are so thin like we are, we’ve got to have our bench also produce. We didn’t put up numbers or rebounds really off the bench position.”

The game will be broadcasted on ESPNU with Danny Lee (play-by-play) and Kevin Lehman (color analyst). We will have a live blog, just like any regular season game, right here on KUsports.com.