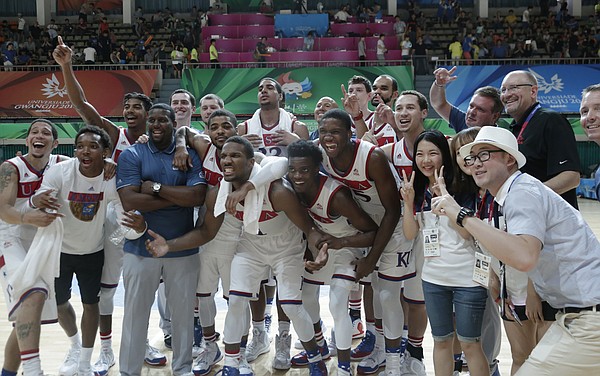 Team USA celebrates for the crowd and television cameras after a 70-48 Team USA quarter-final win over Lithuania Saturday, July 11, at the World University Games in Gwangju, South Korea. by Mike Yoder

The United States men's basketball team passed its first test in the medal round, using its defense to roll past Lithuania, 70-48, on Saturday at DongKang College Gymnasium.

The Jayhawks only led by three points entering the fourth quarter, but opened with a 25-2 run, playing suffocating defense and taking advantage with their transition offense.

The Jayhawks played their best defense of the tournament, which is saying something because they've played some good defense. Landen Lucas and Hunter Mickelson did a good job of clogging the paint and preventing Lithuania's guards from driving and kicking for open looks. Then with good rebounding (USA won the glass, 45-36), USA's guards were free to take risks on the perimeter. The reward: 13 steals (six from Nic Moore). The offense was up and down, but Frank Mason and Wayne Selden stepped up with big baskets in the fourth quarter.

"We were actually great in the first quarter for the most part, average in the second, awful in the third and then that’s the best quarter that we’ve played in the fourth," Kansas coach Bill Self said. 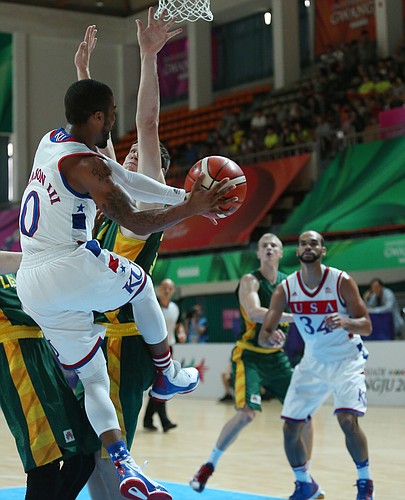 Kansas guard Frank Mason III (0) passes to Perry Ellis, (34) right from beneath the basket in a Team USA quarter-final game against Lithuania Saturday, July 11, at the World University Games in Gwangju, South Korea. by Mike Yoder

2 – Kansas junior forward Landen Lucas stepped up in a big way for the Jayhawks. Lucas has been up and down in the tournament, but this was his peak (so far). He affected shots defensively with his size, fought in the post with physicality, and grabbed nine rebounds while scoring seven points. The Jayhawks had trouble stopping Lithuania's guards from driving into the paint until Lucas and few other forwards clogged it up.

“Landen, to me, he played to his strengths today,” Self said. “He’s really a good player when he’s playing to his strengths and playing with energy, and being a good screener, a good rebounder and a ball-mover. Then he’ll score when he does those things.” 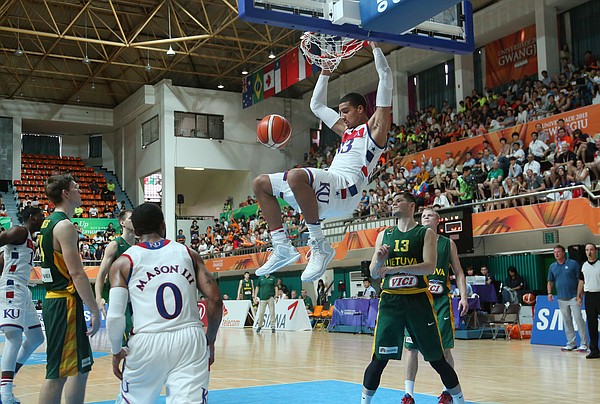 Kansas forward Landen Lucas (33) dunks in the 2nd-half of a 70-48 Team USA quarter-final win over Lithuania Saturday, July 11, at the World University Games in Gwangju, South Korea. by Mike Yoder

3 – KU junior point guard Frank Mason had his best game of the tournament on both sides of the ball. SMU guard senior Nic Moore started the decisive 27-2 run in the second half, but Mason was the catalyst. He had a game-high 18 points (even after hurting his wrist a little bit), grabbed four steals, crashed the glass for seven rebounds and dished four assists.

Mason set his teammates up for easy buckets and even chipped in with seven points in the fourth quarter.

“Frank can get his shoulders past just about everybody," Self said. "When he bails the defense out by not driving it, he’s not near as effective. But tonight he got in there. He doesn’t get in there as much as I want, but the bottom line is the kid is still playing 35 minutes a game. In the course of a regular season, if he’s playing 30 minutes a game, more rested, I think he can really get in there.”

1 – It's been this way for just about the entire tournament, but the Jayhawks struggled to shoot the ball for most of the game. In the middle two quarters, USA shot 32 percent from the floor (9-of-28). Moore was 3-of-10 and Ellis went 5-of-18 from the field. Of USA's 70 points, 40 were in the paint and 16 were on fast-breaks.

The shooting woes even spread to the free throw line on Saturday, with the Jayhawks shooting 9-of-17 from the charity stripe (including 1-of-6 from Selden). 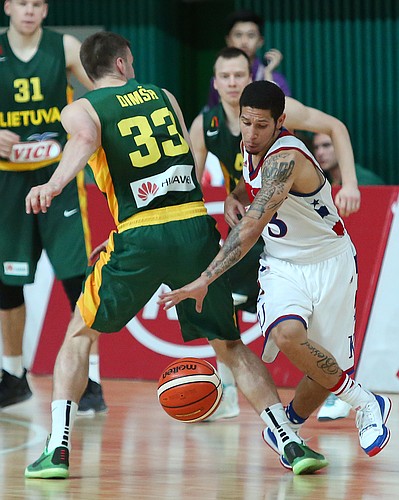 2 – It didn't hurt as much because Lithuania couldn't hit a shot, but the Jayhawks had problems stopping penetration in the first half. I thought Lithuania certainly had its open looks, but just missed all of them.

“It took a little while for us to figure it out,” Lucas said of Lithuania’s offense. “By the fourth quarter, we had a way to guard ball screens and we kind of just got them out of the rhythm of things. We guarded very well.”

“We weren’t making open shots,” Lithuanian center Egidijus Mockevicius added. “We were setting screens and did everything that we could, but we just weren’t making them. I bet it’s just a bad day or something. You can’t do anything about it.” 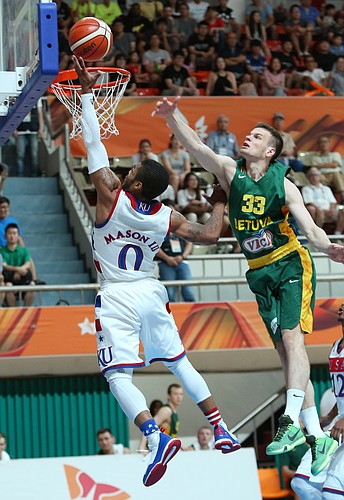 3 – The Jayhawks had some problems with turnovers, committing 17 on Saturday. Again, it didn't hurt the Jayhawks in the game, but they have to be better with the basketball against Russia and Germany/Brazil. Fortunately for KU, Lithuania only scored nine points off of those 17 turnovers.

The Jayhawks will face Russia in the World University Games semifinals at 6:30 p.m. Sunday (4:30 a.m. CDT) at DongKang College Gymnasium. Russia is one of the three undefeated teams left in the tournament (along with USA and Germany) and is right behind the U.S. in nearly every category on offense and defense.

The game will be broadcast by ESPNU (props to anyone who wakes up for it) and we will have a live blog, just like any regular season game, right here on KUsports.com. 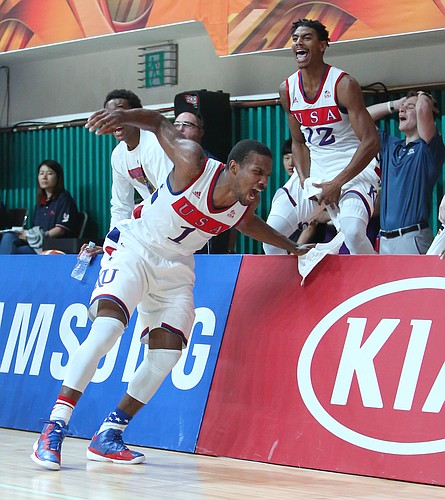 Wake up for it? Well, no. It's two hours earlier here on the west coast. We'll record it and watch it at a more decent hour!

Yeah, that's what I figured most people would do.

We shall overcome the leak!!!