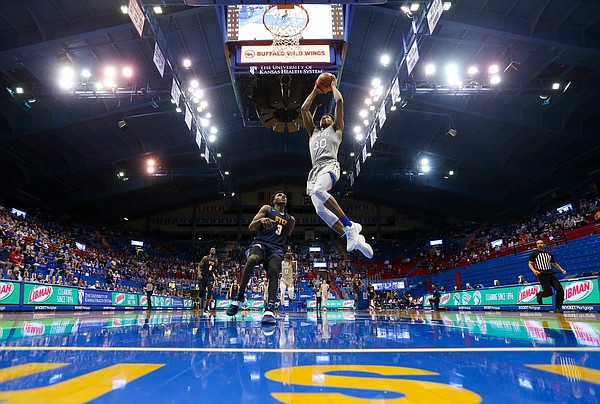 Kansas guard Ochai Agbaji (30) soars in for a breakaway dunk against UTEP guard Keonte Kennedy (3) during the second half on Thursday, March 4, 2021 at Allen Fieldhouse. by Nick Krug

In a matter of three months, the Kansas men’s basketball team has catapulted from possible contender to an early favorite entering the 2021-22 campaign.

Remy Martin and Ochai Agbaji both announced they were withdrawing from the NBA Draft to return to KU on Tuesday, which meant that this roster finally appears to be set. So it was a good time to view the updated betting odds for the upcoming season.

According to DraftKings Sportsbook, the Jayhawks are currently +900 to win the national title next April. They are +200 to make the Final Four, which is something this team hasn’t done since 2018. Both numbers put Kansas behind only Gonzaga and Michigan as of Wednesday morning.

KU’s odds have been cut in half since the offseason began. When DraftKings released its opening odds for the 2021-22 season on April 5, Kansas was listed at +1800 to cut down the nets.

Six squads were listed ahead of the Jayhawks when odds were first released. Gonzaga was still the favorite at +900, followed by Baylor, Florida State and Michigan who all came in at +1200. Ohio State and Villanova both started with +1400 odds to win the national title.

Not all those teams are still around in the updated odds, however. Villanova matches Kansas with a +900 future to win the national championship. Kentucky and Texas are both currently listed at +1200, while Duke and Purdue come in at +1300. Alabama and Ohio State have +1400 odds to win it all.

The Jayhawks didn’t cut their odds in half because of a few players coming back, though that certainly helped their prospects for the upcoming season. This offseason has featured a massive roster overhaul since Kansas was throttled in a 85-51 loss to USC in the second round of the NCAA Tournament last March.

Kansas will have 10 players who are new to the program this winter, a list that included eight scholarship players and two walk-ons. While it might take time for this team to come together, it is a roster that features plenty of firepower on paper.

That’s why KU will continue to be listed among the favorites at all these sportsbooks. And, if certain places are slow to recognize that Kansas has revamped its roster, it might not be a bad idea to take advantage of a good number.