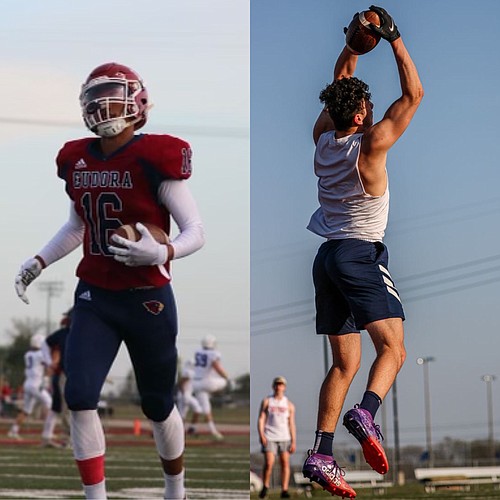 In these contributed photos, receiver Jaiden Bender (left) and tight end Jaden Hamm (right) compete for the Eudora football program. Both juniors have received interest from Division I programs, including Kansas, entering the 2021 season. by Contributed

The recruiting process has been picking up some steam this offseason for Eudora High School juniors Jaiden Bender and Jaden Hamm. The two standout football players have received a combined 14 scholarship offers so far, a list that includes the University of Kansas for both of them.

“It’s another drive point,” Hamm said. “It gives me something else just to continue to work harder and make sure that I just keep doing my own thing, and make sure I’m not getting out-worked.”

Bender, meanwhile, has interest from both the local Division I program entering his junior season. The 6-foot-4, 190-pound wide receiver netted an offer from KU in February before landing an offer from K-State in April.

“It certainly means a lot, especially since the KU one happened toward the middle of sophomore year,” Bender said. “It definitely just like put a little more pep in my step to just work harder and harder each day.”

Both players appear poised to play for a Division I program at the next level along with senior Silas Etter. A three-star athlete on Rivals, Etter is verbally committed to continue his football career at Kansas State next year.

Sean Hayden, who has been the head coach at Eudora since 2018, has played a big role in helping all three players get noticed. Each of their stories are completely different, but they all have promising careers ahead of them.

Here’s an update on where the EHS juniors stand in the recruiting process entering the 2021 campaign:

Hamm open to playing on either side of the ball

Not only does Hamm make an impact on offense and defense for Eudora, but he’s getting called to play either side of the ball at the next level. Hamm is being recruited as a tight end or defensive end, depending on team needs at either position.

Kansas State is the only school giving Hamm the option to play either position at the next level. Oklahoma State and Penn State are recruiting Hamm’s services for defensive end, while all the other remaining programs view him as a tight end.

It will ultimately play a factor for Hamm when he makes his collegiate decision, as he will have to gauge the potential for playing time by taking a closer look at each depth chart. He just doesn’t have a preference at this stage of the process.

Hamm’s recruiting journey started last December, when both KU and KSU offered him after he posted his highlight reel from his sophomore year. He’s since been taking advantage of everything being open again, making time to visit Kansas, Kansas State, Oklahoma State, Missouri and Arkansas this summer.

After the dead period, Hamm would like to check out Nebraska and Iowa State. He also hopes to see Oklahoma State again, since he toured the campus while competing in a basketball tournament down there.

Hamm was especially impressed with his time spent at KU, as he met the new coaching staff during an unofficial visit in June.

“They really surprised me and left a good impression on me,” Hamm said. “With a lot of the coaches just getting in town from Buffalo, I was very pleased and excited with what they had to offer.”

“They will be the turnaround of the KU football program,” Hamm added.

Hamm would prefer to have an idea of where he is committing by the end of his junior campaign. Hamm made 61 total tackles, including 22 solo stops, for the Cardinals last fall during a 3-7 season. But Hamm expects more wins for Eudora in 2021.

“We're preparing ourselves through film and all those workouts to hopefully have one of the best seasons of Eudora football history,” Hamm said.

Playing in a flexbone offense, Bender didn’t get many chances to shine during his sophomore season. He netted six catches for 155 yards and three touchdowns last fall.

“They can just see what I could be (doing) if we threw the ball more and how (much) better it would be,” Bender said.

Bender certainly has a knack for making the most of his opportunities. He averaged 25.8 yards per catch last year.

Bender, who was a talented high jumper in track and actually qualified for the state meet in four different events, can leap up and snatch a ball from the defender. He has the speed and athleticism to make big plays when he touches the ball.

There is still room for improvement as well. Bender is working on his route running, trying to emphasize getting in and out of his cuts. He’s also focusing on his hands, making sure to not drop any of the passes that come his direction.

Bender visited KU for the first time in June, getting a tour of the facilities and meeting with coaches.

“It was a pretty good visit,” Bender said. “We talked to most of the coaches, walked around the facility, saw the players working out, (and) went to the indoor facility.”

Bender would like to keep his recruitment open until his senior season, though he has big expectations for this fall. Like Hamm, Bender believes Eudora can build off its 2020 season, when the team upset Piper in the postseason for its first playoff win in five years.

“We’ve been dominating these past camps we are going to,” Bender said. “I feel like we have a really good chance at going to the (championship) this year.”

Would be great to get some big receivers and even more so keep the local talent local.