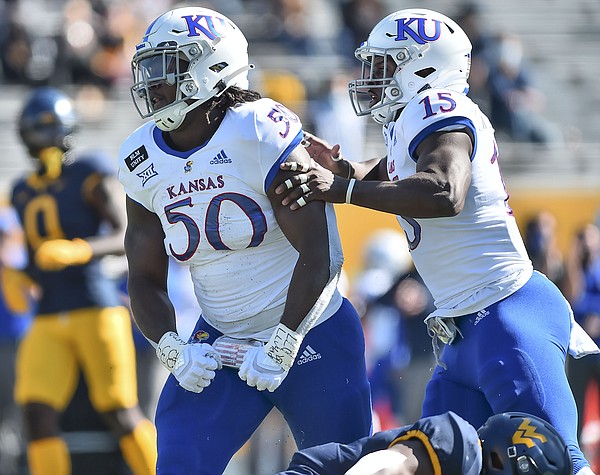 It is no secret that the transfer portal has not been kind to the Kansas football program this past year. But the exact damage wasn’t known until Wednesday.

Bill Connelly, who is a writer for ESPN, posted a tweet on Wednesday that listed out the teams who lost the most players via the transfer portal over the last year. By his unofficial count, the Jayhawks have lost 27 players to the transfer portal.

Only the Tennessee football program, which has seen 37 athletes leave the team, has lost more players to the transfer portal over the last year.

Both KU and Tennessee are dealing with coaching turnover this year, which probably explains why each school is higher up on this list.

Lance Leipold, who was previously at the helm at Buffalo, arrived in Lawrence after the conclusion of spring practices. Josh Heupel, a former Oklahoma quarterback who led his team to a national title, became the 27th head coach of the Volunteers in late January.

Memphis was not far behind both teams, coming in at third with 25 players lost to the transfer portal. TCU, Western Kentucky and Washington State University have all lost 23 players. Auburn, Mississippi State and West Virginia have all seen 22 athletes leave their respective programs.

In a landscape dominated by the portal, Air Force, Army and Wyoming appeared to be unscathed. They had the fewest departures in college football, as two players from each program tested the transfer market.

Of note, both Baylor and Iowa State were among the teams with the fewest players lost this past offseason. The Bears and Cyclones each had seven players enter the transfer portal, per Connelly’s unofficial numbers.

For Kansas, it wasn’t just about the total number of players who chose to leave through the transfer portal. It was more about the particular standouts who decided to leave the team after promising seasons during a winless 2020 campaign.

The Jayhawks lost three key members — Karon Prunty, Da’Jon Terry and Marcus Harris — of their defensive unit, all of whom will be competing in the SEC this fall.

Terry (nose tackle) and Harris (defensive end) are big departures along a defensive line that showed a lot of potential. Terry transferred to Tennessee after recording 14 tackles last year, while Harris headed to Auburn following a 27-tackle season.

Prunty, a lockdown cornerback, took his talents to South Carolina after a phenomenal freshman season. Prunty was named to 247 Sports’ True Freshman All-American team last year after he broke up 10 passes, tying him for first among all FBS freshmen in that category.

Connelly’s numbers don’t seem to factor in how many players a school gained via the transfer portal, as KU did its best to replace these particular players with a collection of transfers from Buffalo after Leipold took over the program.

But it is clear that the Jayhawks are dealing with plenty of turnover — along the roster and coaching staff — entering the 2021 season.

Most players lost to the transfer portal over the last year (by my count):

Not that I was keeping a running tally of the players that have transferred out, but this number really surprised me and only adds to the task for Leipold and his staff to get things turned around. One piece of context that we are lacking in the totals from Bill Connelly though is how many of these players would have been super seniors this year and we'd have lost in a non-covid situation. Not that their transferring out isn't a loss to the program given the experience they'd bring, but they would have been gone through graduation in a normal situation and we'd be replacing them with new players regardless.

Additionally, what is the breakdown of transfers pre/post Miles firing and how many have come in via the transfer portal to balance out the departures? This will help tell a more complete story instead of seeing a single number and trying to draw conclusions from it.

Benny - Good point about timing. Of the 27, only 3 left after Coach Leipold got here, vs the 6-8 that arrived. Most of our transfers had left before anything even began to surface about Coach Miles. It was also rather expected given the switch to the younguns through last season.

Also interesting to see TCU and WVU so high/or is it low on the list.

Also worth noting is that WSU and MissState are on opposite ends of the Mike Leach coaching change.

And another great article Shane. You’ll be missed.

Yes! Very good article Shane. I do have a question about how this has affected KU's numbers. Since the transfer portal was established, when a player leaves the program, does the University get anything back when the player leaves?