A look back at how KU safety Kenny Logan Jr. performed in 2020 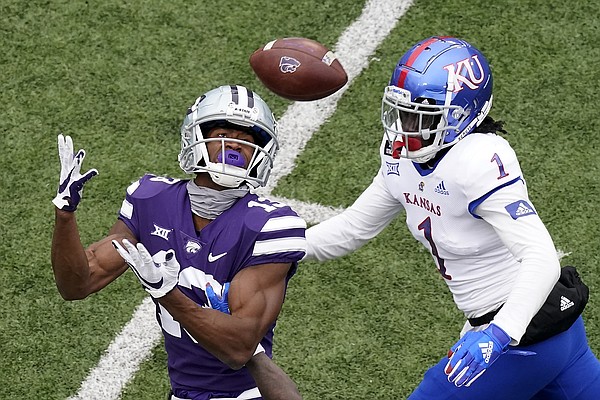 As the unquestioned leader of the defense, it makes sense that junior safety Kenny Logan Jr. was picked to be one of the two representatives of the Kansas football team at Big 12 media days this week.

Logan emerged as one of the top producers on the team last year, playing in all nine games and leading the Jayhawks in tackles with 58 on the year. He produced 40 solo stops to go along with three pass breakups and two interceptions.

According to NCAA Premium Stats over at Pro Football Focus, Logan logged 444 total snaps in 2020 after only 53 total plays in 2019. He posted a coverage grade of 61.8 and a tackling grade of 61.5 last fall, but even those numbers don’t explain what all he did on the football field.

Before Logan talks to reporters on Thursday about the upcoming season, I took a closer look at what he accomplished as a sophomore via PFF’s premium stats. Here are three things that stood out:

As a safety, Logan isn’t targeted that often in any particular game. Kansas State attacked him the most in 2020, connecting on all three passes thrown in his direction for 63 total yards during a 55-14 lopsided affair on Oct. 24.

Logan had a nice response after one of his worst games in pass coverage, however. After that, Logan only gave up two total receptions over the final four games during a stretch against Iowa State, Oklahoma, TCU and Texas Tech. He surrendered a total of 36 yards over that span.

For the season, Logan gave up nine receptions on 16 targets for a reception rate of 56.3% in nine games. He allowed 138 total yards, which included 33 combined yards after the catch.

If that stretch over the final month of the season was a sign of Logan getting more comfortable, it could mean that the talented safety is in for an even bigger year in 2021.

Logan was versatile last year for KU’s defense. He lined up as a free safety on 179 snaps, while moving up into the box on 190 snaps. Logan was even used in the slot on 64 total plays last year.

But it was clear that Logan was at his best while playing free safety. Per PFF’s college football preview magazine, Logan ranked second in the Big 12 in coverage grade at free safety while that mark dropped down to 18th among 24 qualified safeties when he lined up in the box.

That would suggest that Logan is more comfortable when he can keep the action in front of him, which makes sense given his usage in pass coverage. Per PFF, Logan played zone defense on 77.5% of his coverage snaps.

It will be interesting to see whether or not the new coaching staff leans into Logan’s strengths as a player.

Ranked among the best in Big 12 as kick returner

Logan landed on the All-Big 12 honorable mention team as a returner, so it shouldn’t come as a surprise that he graded out well by PFF in that facet of the game.

Among Big 12 players with at least 10 kickoff returns in 2020, Logan ranked fifth in the league with a kick return grade of 69.3. He turned 14 kickoff returns into 352 yards by PFF’s numbers, which included the 104-yard touchdown against Iowa State.

Right behind Logan was KU receiver Jamahl Horne, who has been involved as a kick returner in each of the past two seasons. Horne posted a kick return grade of 67.9 in 2020, accumulating 339 total yards on 15 such opportunities.

Both Logan and Horne should continue to be integral parts of KU’s return game this fall.

Given the points we gave up last season there sure were lots of return opportunities. I hope to see fewer of those opportunities this next season and future seasons.

It’s good to have Jamahl alongside Logan for kick offs. Keeps the opponents honest.