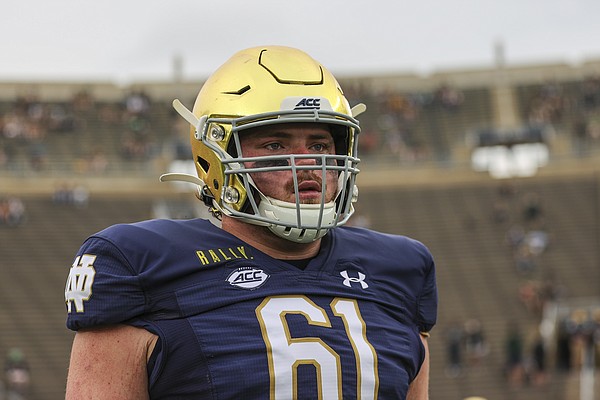 Colin Grunhard, formerly a walk-on at Notre Dame, announced Jan. 5, 2021, his decision to transfer to the University of Kansas and play his final two seasons with the Jayhawks.

The Kansas offensive line received a much-needed boost on Tuesday, when former Notre Dame backup center Colin Grunhard announced he was transferring to the University of Kansas.

Grunhard, a former walk-on who eventually earned a scholarship, will have two years of eligibility left. Before joining the Fighting Irish, Grunhard was a four-year starter at Bishop Miege and received offers from Air Force, Colgate and South Dakota.

Grunhard probably could have gone elsewhere in the transfer portal, but playing time seems to be a big reason why he landed in Lawrence. According to NCAA Premium Stats on Pro Football Focus, Grunhard played 99 snaps at center across three seasons with Notre Dame.

As a result, there really isn’t a lot of tape on Grunhard at the collegiate level. Fortunately for the purpose of this report, Jon Kirby of Jayhawk Slant put together a 13-minute video of Grunhard’s snaps at Notre Dame that featured multiple angles on each play. I highly recommend checking it out to form your own opinion.

After watching the video multiple times myself, I have a better understanding of who Grunhard is as a player and how he will fit with the Jayhawks. So here is my full report on KU’s newest center:

For comparison, the highest pass-blocking grade by a KU player with more than 20 snaps this past season was Chris Hughes with a mark of 55.1. Earl Bostick Jr. paced the run-blocking unit among regular linemen with a grade of 72.2 on the year.

Body type/athletic ability: Grunhard is listed at 6 feet and one-half inch and 290 pounds, according to the Notre Dame roster. Grunhard probably won’t get much bigger, but he’s ready to play as is. His height has been viewed as a concern by some, but I actually think it helps him have great pad level and leverage in most situations.

More importantly, Grunhard has the athletic ability to be a starting center at the college level. He’s explosive after the snap, with great initial footwork to get in position. He has solid speed to get to the second level and execute blocks in space, and was even asked to be a puller on occasion for Notre Dame.

There was one play all the way back in 2018 that really highlighted who Grunhard is as a player and why KU fans should be excited that he is coming to Lawrence.

It was an outside zone run to the right, in which Grunhard didn’t immediately have a player to block. After making sure his right guard didn’t need help, Grunhard picked up a crashing linebacker at the time of the handoff. Grunhard met him with good pad level and solid hands, and there was no chance of his man making the play behind the line of scrimmage.

Grunhard could have stopped there. After all, he had done his job and the play was going the other way. Instead, Grunhard maintained his block all the way through. When the Wake Forest defender spun and headed upfield, so did Grunhard.

Grunhard proceeded to stick with his block for nearly 10 yards until the final whistle. The play ended on the other hash, and Grunhard was the only player blocking by the end of the sequence.

Only one player is still blocking nearly 10 yards downfield at the end of a play in this Notre Dame-Wake Forest game.

It really just highlighted Grunhard’s biggest attribute, which is his competitive toughness. Grunhard has a tendency to block until the final whistle on most plays. He’s seemingly always looking to hit someone. Grunhard has a fiery style of play, which is a trait that not every lineman has.

Grunhard has even more positives from a technical standpoint, too. Grunhard has good explosiveness, and was often the first player in position after the snap. His solid initial footwork, particularly with his lead step, allows him to reach either a 0-tech or 2-tech defender to get in position to make a play.

When Grunhard does meet a defender, he is often the low man at point of attack. Grunhard has really good pad level, which allows him to have great leverage on most blocks. Grunhard might not get much push at the point of attack, but his pad level and solid use of hands should translate to success in the run game.

Grunhard also showed the ability to get to the second level and execute blocks in space against more athletic defenders.

One reason for concern: Lack of reps in pass protection

This actually isn’t a knock on Grunhard, but one thing that stood out was the lack of times he was asked to pass protect. There were very few of those reps in that 13-minute video on Jayhawk Slant, and there is a reason for that. Per PFF, Grunhard had just 20 snaps in pass protection during his Notre Dame career.

Now, let’s use some common sense here. The reason why that is the case is because Grunhard was a reserve and he typically saw action late in games when Notre Dame was just running out the clock. In fact, half of Grunhard’s pass-blocking reps came in his 18-play outing against Bowling Green in 2019.

Based on what Grunhard is good at in run blocking, though, we can make an educated guess on how well he will hold up in pass protection. I would expect a center who has really good pad level and technically sound hand placement when he is ultimately asked to pass protect for KU.

Like most centers, Grunhard won’t be asked to have too many one-on-one battles and that is good because he probably doesn’t have the play strength to overpower defenders.

Grunhard’s ability to read and pick up blitzes will determine how well he does in pass protection. But there was some of that mental processing on display in the run game, so that probably won't be an issue.

Overall thoughts and projection: It might not be saying much because KU’s offensive line was terrible in 2020, but that position group just got better by adding Grunhard to the mix.

Grunhard comes from a prestigious program like Notre Dame, which consistently has one of the better offensive line units in the country. Because of that alone, Grunhard should be able to bring a leadership aspect to this group and ultimately help turn things around up front.

As a player, Grunhard has all the tools to compete for immediate playing time. Grunhard has really good pad level and leverage to go along with solid technique on a consistent basis. He also appears to be one of the more competitive players on the football field, and that mentality should be evident as soon as he steps on campus.

A lot of things can still happen before the 2021 campaign begins, but I would expect Grunhard to be the starting center for the Jayhawks in the season opener.

Guessing he will also be able to help groom the next center if not the entire OL. Nice that he’s a coach’s son.

Being 6’ also means 1 less head in the way for some of our QBs.

Excellent addition! Any offensive lineman that we can add at this point is good, but he seems like a great find.

Check out my music at LenShaffer.Bandcamp.com.