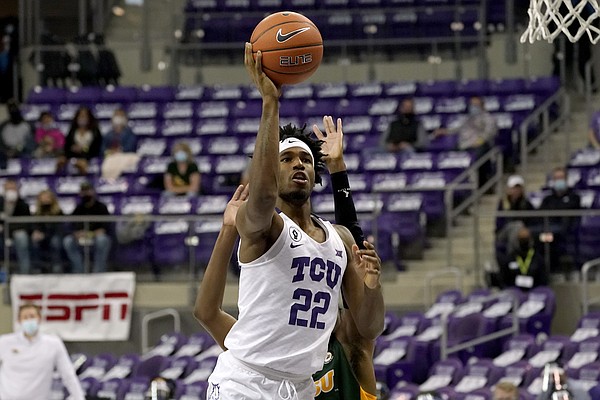 Coming off a conference loss, No. 6 Kansas will look to bounce back on the road against TCU on Tuesday. Tipoff is slated for 9 p.m. in Ed & Rae Schollmaier Arena in Fort Worth, Texas.

Despite recent results, KU is expected to win this game. According to KenPom, Kansas has a 65% chance of victory and is projected to win by a 71-67 margin. Torvik gives the Jayhawks a 60% chance to defeat the Horned Frogs.

All of that makes sense when you consider how good KU has been coming off a loss under Bill Self. With Self at the helm, KU is 97-13 following a defeat and is even better over the last six-plus seasons by posting a 46-5 clip over that span.

The game will air on ESPN with Mark Neely and Fran Fraschilla on the call.

TCU has a talented backcourt, which is led by junior guard RJ Nembhard.

Nembhard leads the Big 12 in scoring with 18.7 points per game, which includes a really impressive stretch as of late. Nembhard has netted 20 or more points in four consecutive games. Last time out, Nembhard scored 21 points on 50% shooting from the floor.

Nembhard ranks sixth in the Big 12 in field goal percentage (48.8%) and is also sixth in assists per game (4.4) so far this season. Nembhard is an athletic scoring guard that can really produce off the dribble, but he can also be careless with the ball at times.

Last season, Nembhard was second on the team in scoring with an average of 12.1 points per game.

The other piece of that talented backcourt tandem is freshman guard Mike Miles.

Coming out of high school, Miles is the 114th-ranked prospect in the Class of 2020 and the 27th-best point guard by Rivals. Miles has really good handles, and excellent playmaking ability in his first year with TCU.

To complete a nice balance, the Horned Frogs have a reliable veteran presence in the paint.

Junior center Kevin Samuel is the only other TCU player to average in double figures with a scoring average of 10.2 points per game through 11 contests. He’s also averaging 10.2 rebounds per contest and 2.6 blocks per outing.

Samuel is TCU’s career leader with 191 blocked shots. He leads the Big 12 and ranks 20th nationally with 2.6 blocks per game. Samuel tallied seven blocks against Oklahoma State on Dec. 16, which was the most by a TCU player in 20 seasons.

ONE THING TCU DOES WELL

TCU has fared well on 2-point shots so far this season, hitting 54.5% of such attempts from the floor. That clip ranks 57th in the country, according to KenPom.

The Horned Frogs won’t get much production from the charity stripe. TCU’s 64.2% clip from the free throw line ranks 292nd in the nation. TCU averages 11.9 made free throws per contest.

Kansas is a 6.5-point favorite at the FanDuels Sportsbook as of Tuesday morning. KU has obviously done a good job of bouncing back after a loss, but I think this is too many points to lay on the road. TCU does a good job of protecting the rim, an area where KU has struggled so far this season.

Give me Kansas in a close one.