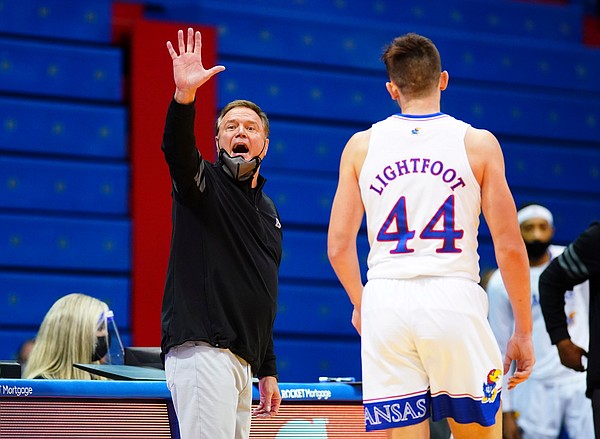 Kansas head coach Bill Self calls a play during the second half, Saturday, Jan. 2, 2021 at Allen Fieldhouse. by Nick Krug

No. 3 Kansas trailed from start to finish of its 84-59 loss to No. 8 Texas Saturday afternoon in Allen Fieldhouse. Limited crowd or not, that’s not the sort of thing that happens to the Jayhawks in Lawrence.

In fact, KU’s 25-point loss is the team’s largest margin of defeat in Allen Fieldhouse in the Bill Self era and largest by the program since 1989.

Almost a year ago to the exact date, Kansas dropped a 67-55 decision to Baylor at home. The performance highlighted some limitations that the Jayhawks had at the time, though they never lost again and ended up winning 16 in a row after that.

It is not fair to expect that level of response from this year’s squad, of course, but it illustrates the importance of not overreacting from one game. With that said, here are a few observations from what was the first KU game of 2021:

Entering Saturday, Texas ranked fourth in the nation in adjusted defensive efficiency on KenPom. The Longhorns’ length and athleticism was supposed to make life more difficult for the Jayhawks, and they ended up shooting 20-for-65 from the floor.

Kansas missed its first eights shots from the floor, and never really got into a rhythm after that. But KU’s decision making in transition certainly played a part in all that, especially when the team couldn’t buy a bucket out of the gate.

Following a missed layup by Texas, Kansas had a chance to hit its first field goal in a four-on-two situation. Jalen Wilson, who collected the defensive rebound on the other end, fired a pass to Ochai Agbaji along the perimeter.

Agbaji missed the 3-pointer, which was KU’s eighth miss of the game.

A wide-open 3-pointer is usually a good shot, but KU could have attacked the rim to get a better look in this scenario.

Wide-open 3 is never a bad thing, but feels like KU could have got a better shot here on a day where the Jayhawks have missed their first 8 shots #kubball pic.twitter.com/vUi1M1GuOy

It merely highlighted some of Kansas’ struggles in transition, however.

Just over one minute later, Wilson had a two-on-one with Christian Braun and chose to do it all himself. He ended up getting the foul call, but it was a sequence that could have been a lot easier had Wilson dished the ball to Braun for an easy layup.

For the game, KU only had 6 fastbreak points against Texas. On a day where hitting shots was so difficult, more success in transition could have ultimately led to some easy buckets for the hosts.

The junior guard was the only source of offense for the Jayhawks in the early going. By the second media timeout, Agbaji had made all three of KU’s shots to that point in the game.

Agbaji finished with 11 points in the loss. He was the only other player to finish in double figures along with Wilson, who paced the team with 20 points. Agbaji was 5-of-14 from the floor, including 1-of-6 from long range.

But Agbaji could have helped himself by getting better looks, too. Agbaji hit a couple mid-range jumpers in the first half that served as one of the rare offensive bright spots for KU. At the 5:38 mark, Agbaji hit a pull-up jumper over 6-foot-10 Texas forward Jericho Sims.

Because of that, Agbaji probably took more of those types of shots than he should have. Agbaji ended up missing four of his six total jumpers (inside the arc) against Texas. He did not score at all in the second half, missing all five of his attempts from the floor.

The Jayhawks’ lack of rim protection is nothing new, but it was obvious against a team like the Longhorns that can play above the rim. A total of 13 of Texas’ 30 made field goals came at the basket, with the visitors recording seven layups and six dunks on the day.

Coming off the bench, Mitch Lightfoot did his best to deter Texas from getting easy looks. He recorded two blocks in his five first-half minutes, including this nice recovery swat late in the first half.

That showing, along with David McCormack’s rough stretch to end the first half, was enough for Lightfoot to earn playing time to begin the second half. McCormack didn’t check back into the game until nearly 13 minutes had passed in the second half.

Lightfoot didn’t record another swat in the second half, but his play was worth mentioning given how Kansas has fared at protecting the rim this year. Entering Saturday, KU had a block rate of 8.6% and that number ranked 155th in the country on KenPom.

For the season, Lightfoot has netted a team-high nine blocks in 80 minutes of action.

Everyone on team has to step up the intensity a notch, and certainly we cannot give up wide open 3 point shots, we would have been much better off to have run Texas off and made them drive to the basket.

We still are very much in the race for champikonship, but we have to move into next gear.

With our Sixth Man - Bryce Thompson - unable to play due to injury - Self had to play Grant-Foster and Enaruna. They are hilariously bad!

Self has much to teach. This might be a good time to install the offense. KU is really easy to guard.

very surprising loss -given its Texas and Shaka as the coach. But this reinforces the narrative that we simply aren't that good. Looking at our schedule, we've really only played one really good team - Gonzaga and they b$#% slapped us. The rest of the schedule looks bleak as well. I expect us to cruise through the big 12 as always, but will flame out early.

There was a note on ESPN that this loss tied the largest margin of defeat in Allen EVER= since 1955. I agreed our bench is woeful. Foster looks lost and Enaruna just seems to never get it together to be consistent and in the flow. Harris can't shoot it and even took a 3 when one of our guys had a wide open look with a pass in rhythm if the pass is made. McCormack was terrible. Missed 2 slams that did not need to be slammed. He's no threat to stop any rim intrusions. Throw him the ball and some kind of shot is going to by put up while he fades away from the basket and there's no one to rebound. Bad percentage deal. It's tough to see a KU team get completely beat up for most of 40 minutes. Now we get TCU on the road and who know, it could be another blowout or a defining moment to re-group and recover. Go Hawks!

Shane, your analysis on Mitch's D is spot on. But I dont' think it's fair to blame Agbaji for taking those jumpers. I do see that as an improvement and he has to keep taking those Js. That's a very good play, screen set by Mitch, Ochai curled up and take the uncontested jumper. What might be a better play is if Mitch establishes position, right after screening for Ochai, he needs to slip into the basket IN FRONT OF Sims instead of behind him. That will increase our chances to score: Ochai's J, Ochai's pass to Mitch for a dunk, or Mitch going for a rebound. It's a great play and a great decision by Ochai. Let him shoot those Js, make him comfortable taking Js. There's nothing wrong with that. Let the other teams target Ochai as a jumper, that'll open up more opportunities/offensive plays for others. This is a progress on our offensive plays.
Those were good jumpers. I like what I'm seeing so far. However, Mitch has to get involved offensively. Harris threw a good pass to him, but he lost it. Drives me nuts. Mitch has to learn how to power dribble and just take off destroy the rim. Just like he goes up vertical on those blocks. This kid has motors, but somebody has to TRAIN MITCH HARDER TO DESTROY THE RIM. He sets up good screens (not the moving ones) but that's about it. I've said this so many times. Our coaching staff is not doing enough to train these kids. I really hope someone talk to them.