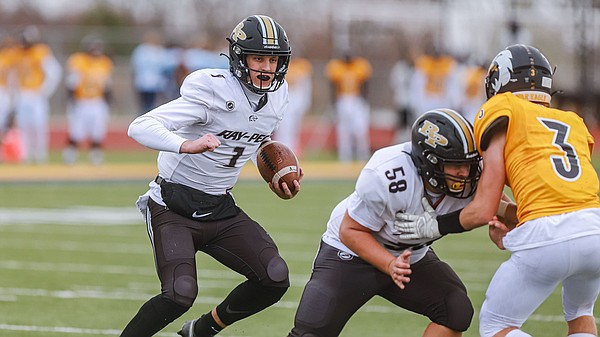 Another first-year quarterback is expected to be in the mix this spring for the Kansas football team.

Also like Easters, Hawley is a three-star prospect on Rivals. Both are considered pro-style quarterbacks as well. Per Rivals, Hawley is listed as the 18th-best prospect in the state of Missouri in the Class of 2021.

The purpose of this report isn’t to determine who is the better option at quarterback. That will inevitably be decided at some point in their careers. Let’s focus on understanding who Hawley is as a player instead, and what he could ultimately bring to KU.

Based on his Hudl film, here is my report on KU’s newest quarterback:

Key stats: According to MaxPreps, Hawley completed 164-of-275 passes for 2,722 passing yards during his senior season at Raymore-Peculiar High School. He threw 25 touchdowns and 12 interceptions. Hawley secured a state title and won the Simone Award in 2020.

Body type/athletic ability: Hawley is listed at 6-foot-5 and 220 pounds on Rivals. He comes in way closer to being college ready from a physical standpoint thanks to his own commitment in the weight room. Compared to his frame as a junior, Hawley put on close to 50 pounds and it really helped him take a huge leap as a signal caller.

Ridiculous work, stupid amounts of calories, and @TopSpeedLLC is the recipe.

None by Adam Hawley

Strengths: Strong arm, can make variety of throws, and ability to make plays out of structure

Hawley feels like the type of prospect that would have been a much bigger deal like a decade ago, when everyone was drooling over the strong-armed quarterback at all levels. Now, there seems to be an emphasis on landing more mobile quarterbacks and not necessarily the tall signal caller with a strong arm.

That said, Hawley’s arm strength was the first thing that popped when watching his tape. He has a segment labeled “deep balls” on his Hudl film at about the 2:20 mark. The first one really caught my eye, because Hawley put the 45-yard pass where only his receiver could make a play on the ball.

Hawley launched the ball as soon as he hit the final step of his drop back, and saw his receiver had a step on the defensive back. Hawley aimed the throw toward the sideline because there was a safety coming to provide help over the top. The receiver was able to get his hand on the ball at the goal line. It was just the perfect ball location.

Hawley had more throws like that, but that play really helps paint a picture of one of his best attributes. He really can drive the ball downfield, and he demonstrated great footwork on such throws. He had a quick release as well.

But Hawley showed the ability to make a variety of throws, as his Hudl film also had quick passes and mid-level tosses. He wasn’t afraid to throw in a tight window, which probably played a part in him tossing 12 interceptions.

My favorite play was when Hawley changed arm angles because he had two defenders in his face. Sometimes this can be a bad habit for young quarterbacks, but it didn’t seem like Hawley altered his throwing motion much outside of that specific play.

On this particular play, Hawley had to go side arm because he had a defender coming straight at him. The ball was slightly behind the receiver, who was about 10 yards upfield. Yet the pass was still on target enough to let the receiver make something happen after the catch.

The best part about the play was that Hawley threw to where the receiver had to be. At the time of the release, the receiver was directly behind a defender. Hawley threw him open, despite having to change his arm angle and having two defenders basically on top of him.

That play was a glimpse of what really made Hawley’s tape pop though. Many of Hawley’s best moments came when he had to make something happen out of structure.

Mobility will rightfully be a concern for Hawley, but he showed enough movement to extend plays during his senior season. He demonstrated solid pocket presence, and had a knack for getting in an athletic stance when he felt pressure.

Most of all, Hawley did a good job of keeping his eyes upfield whenever he ultimately had to improvise. Whether he was going left or right, Hawley was constantly looking for an open receiver when he was on the move. Sometimes young quarterbacks will just take off to gain yardage via a scramble.

I liked that Hawley's first priority was to find an open man when he had to leave the pocket.

One reason for concern: Won’t be used in the QB run game

Hawley was used as a runner at times in high school. At one point in his Hudl film, Hawley ran a QB draw to effectively ice the game. You can tell by his movement in the pocket that he has efficient footwork, and that should bode well for his future as a signal caller.

But I’d be surprised if Hawley is involved in the quarterback run game at the collegiate level. That isn’t necessarily a bad thing. Players are just faster and can tackle better in the Big 12, and it doesn’t seem like Hawley would have much success on designed runs.

As long as Hawley's ability to extend plays translates, though, I think that will be more than enough mobility for him to find some level of success as a collegiate quarterback.

Overall thoughts and projection: It is easy to be optimistic about Hawley’s fit after watching his highlights. He has a lot of traits that should translate. Hawley's growth as a player and a person ahead of his senior season should speak volumes to his work ethic and his commitment to getting better.

At the very least, Hawley provides depth in a quarterback room that now features three promising young signal callers. But I think there is reason to believe Hawley could push Jalon Daniels and Ben Easters for immediate playing time.

The Jayhawks should have an interesting quarterback room now with some serious potential, even if there are some growing pains at first.

I have to agree with the article. - - At the very least I think we have 3 strong QB options where the level of their talent is going to give us some really good quality QB"S. The best part of this all 3 are Freshmen and all should be here for 4-5 years gives us some better options for sure, think one or hell who knows can develop into quality QB's for us.

One thing for sure Hawley has that QB build, won't be getting alot of passes slapped back at him because of height. - I like this core of QB's

Give the quarterback protection in any case.

Do we know if McVittie and Kendrick are gone?

They were the first two options to start the season and Kendrick again at the end of the year. There was lots of hype around Daniels, but I’m not seeing him as a better option than Kendrick, at least currently. https://kuathletics.com/wp-content/uploads/2020/12/12.6-Season-Stats-1.pdf

It’s good to see how much Hawley has grown in the past year. So much of a player’s success as the level steps up is a matter of personal development. Hopefully the mental is as much as the physical.