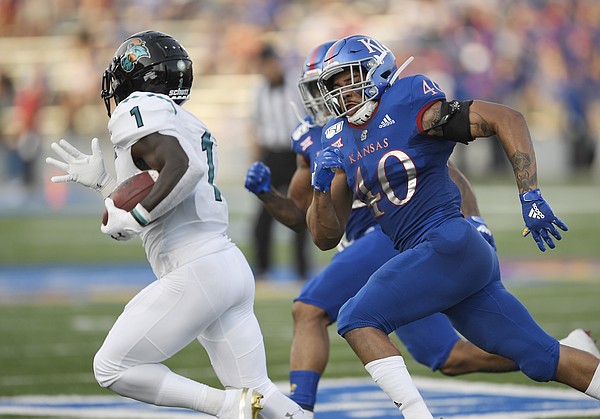 After an offseason that felt like it lasted like six years, it is officially game week for the Kansas football program.

KU obviously didn’t wait until now to start preparing for Coastal Carolina, as you can bet that Les Miles’ staff has done their due diligence ahead of the rematch following last year’s 12-7 defeat. So that’s exactly what we are going to do to get a better understanding of the Chanticleers before Saturday’s late-night matchup, which kicks off at 9 p.m. at David Booth Kansas Memorial Stadium.

With this weekend being the season opener, our only option is to take a look back on Coastal Carolina’s 5-7 campaign during the 2019 season. So I have picked five notable statistics from last year, using CFB Premium Stats+ over at Pro Football Focus, to help give a better idea of what worked for the Chants a year ago.

Let’s start with the obvious: Kansas will have to do a better job containing senior CJ Marable. The 5-foot-10, 200-pound running back sliced through KU’s defense last year for 148 rushing yards and one score on 24 attempts. Eight of Marable’s 24 carries ended with either a first down or a touchdown. He also recorded a 20-yard touchdown grab in the second quarter for his lone reception of the game.

There are ways Kansas could have been better to produce a different outcome last year, but it wouldn't be surprising if Coastal Carolina was thinking the same thing. Despite holding the Jayhawks to just seven points, the Chants really tackled quite poorly en route to capturing their first-ever win over a Power Five program.

Per PFF, Coastal Carolina produced a tackling grade of just 38.3 against Kansas. It marked the team’s lowest grade of the season. For comparison, the Chanticleers posted a tackling grade of 70 or better in two different games. The Chants missed 17 tackle attempts as a team against the Jayhawks, which included five different players having multiple whiffs.

Some of that is to KU’s credit, of course, but Coastal Carolina also has to believe it can do better in that department this time around.

The Chants had some reliable hands as a unit last season. In fact, Coastal Carolina posted a drop rate of 3.2% in 2019. Only Virginia (1.7%), Oklahoma State (2.3%) and Oklahoma (2.8%) had a lower drop rate in all of college football. And it gets even more impressive when you dig into those numbers a bit more.

As a team, Coastal Carolina had a total of 10 drops while throwing the ball 27.8 times per game. Three of those 10 drops came from one player who has since graduated. Isaiah Likely, Jaivon Heiligh and Marable, who are all coming back this season, finished in the top-three in receptions for Coastal Carolina. All three players posted a drop grade of 74.1 or better, according to PFF.

Likely is a talented tight end

Speaking of Likely, the Jayhawks figure to have their hands full with this talented tight end who is 6-foot-4 and 245 pounds. As a sophomore, Likely accounted for 431 yards and five touchdowns on 32 grabs. Likely netted a reception in all 12 games last year, extending his streak to 15-straight games with at least one grab.

Even when defended well, Likely has a knack for coming down with the ball due to his ability to be aggressive at the catch point. Per PFF, Likely came down with eight of his 14 contested opportunities in 2019 to finish with an 88.0 receiving grade in such situations. For the season, Likely posted an 81.3 receiving grade.

Coastal Carolina has its own quarterback controversy — maybe

While Miles announced that KU could employ multiple quarterbacks earlier this week, don’t be surprised if Coastal Carolina does something similar. Both Fred Payton and Bryce Carpenter got plenty of action under center last season. Payton went 119-for-187 through the air for 1,421 yards and 12 touchdowns. Carpenter completed 93 of his 142 pass attempts for 927 yards and eight scores.

Despite those surface stats, PFF’s numbers indicate that Carpenter is the better option at quarterback. Payton, who threw seven interceptions in 10 games, produced a passing grade of 60.9 last year. Carpenter, meanwhile, had a passing grade of 70.9 across his 10-game campaign.