Coastal Carolina preparing for a different KU offense this time around 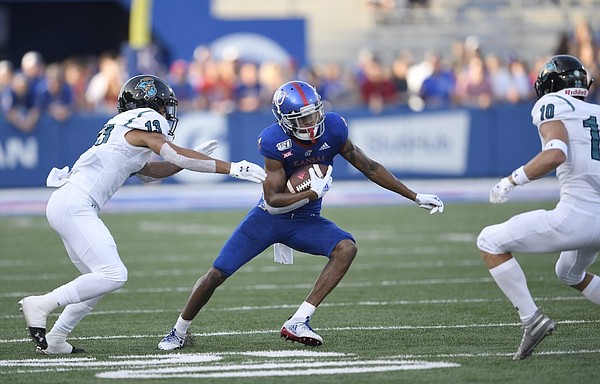 Coastal Carolina head coach Jamey Chadwell knows his offense is going to have to be better if his team wants to knock off Kansas for the second year in a row.

The Chanticleers needed just two scores in a 12-7 win at David Booth Kansas Memorial Stadium a season ago, marking their first-ever victory against a Power Five program. But Chadwell already knows that won’t cut it in the 2020 season opener, which is a 9 p.m. tilt that will be televised on FS1.

“It is going to be different this year,” Chadwell told reporters during his weekly press conference via Zoom on Wednesday. “Because we are going to have to score some points to win the game."

The reasoning behind this proclamation is actually to KU’s credit. In last year’s meeting, the Jayhawks were in the second game of the Les Miles era and had a different offensive coordinator at the time.

KU will now have offensive coordinator Brent Dearmon, who took over the role midway through last season, calling the plays this weekend. And the Chants have tried their best to prepare for what figures to be a different offense than the one they faced last year.

“I think it does make it a challenge for our defensive coaches,” Chadwell said. “There is still some unknown about how much of a stamp he's going to put on it and what they are going to do.”

Coastal Carolina’s coaching staff has certainly done its homework on Dearmon since preparing for Kansas over the past week or so. Yet it probably didn’t take them long to understand the challenges that defenses face when going up against Dearmon’s RPO-based offense.

Dearmon proved that after taking over for Les Koenning, who was fired during a bye week in the middle of the 2019 season. KU scored a total of 85 points in the first two games with Dearmon serving as offensive coordinator. The offense wasn’t always that unstoppable the rest of the year, but it was a unit that looked vastly different than the one Coastal Carolina saw in Week 2.

Kansas scored at least 30 points in three of its final six games after doing so just once in six contests before Dearmon took over. In his six games leading the Kansas offense in 2019, the Jayhawks averaged 24.1 points and 400 yards of total offense per game.

“They got more comfortable in that offense and they became more explosive,” Chadwell said. “In our game, they were really trying to pound it. (Under Dearmon) they are throwing the ball around a lot more. They are spreading it out a lot more.”

At the same time, Coastal Carolina also figures to have more confidence in its defense this time around. Chad Staggs was promoted to defensive coordinator for the Chants in late July, which proved to be a bit of an adjustment for both him and the players at first.

The defense eventually improved under Staggs and actually led the Sun Belt in fewest first downs allowed with 241 last year. Coastal Carolina allowed 160.1 yards per game on the ground, while giving up 223.5 yards per contest through the air last season.

“I think you will see that we will be a bit different, too, in some of the things that we are doing,” Chadwell said. “(Our players) are going to be more comfortable in our scheme."

It remains to be seen which unit catches the other team by surprise more on Saturday.

Where can I watch (preferred) or listen to Hawk Talk with Les Miles? I'm out of state. Thanks.

Have you not figured out Google yet?

Hawk Talk with Les Miles will take place each Wednesday from 7-8 p.m. and can be heard around the state of Kansas on the Jayhawk Radio Network affiliates and via KUAthletics.com, which will also feature a live audio stream of the show. Fans can submit questions to Coach Miles on the front page of KUAthletics.com.

Thanks, John and Marc. I missed the first one. If I recall, kusports will have a link to the replay once it's available. I read somewhere the video version will be available as a replay. That's the one I prefer. My mind tends to wander on the audio-only broadcasts more than a minute or two long.