A look at KU's personnel usage vs. Baylor in Big 12 opener 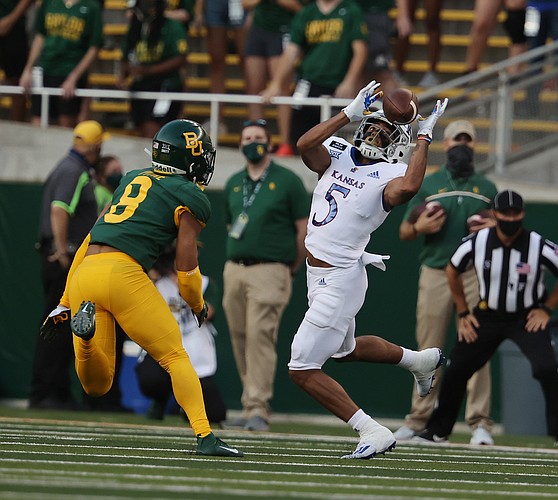 Kansas might have had a true freshman quarterback in the Big 12 opener, but the offense was still much of the same — at least personnel wise — in a 47-14 loss to Baylor this past weekend.

The Jayhawks utilized five different personnel groupings for the second game in a row, making sure the opposing defense saw a variety of different formations in the process. Like the season opener, most of KU’s success came in a one-back, one tight end grouping.

Kansas also used a two-back package on 30% of its offensive plays against Baylor, which will be something to monitor given the tweak that look featured this past weekend. But we will get into all that in a bit.

First, let’s take a look at how the Jayhawks performed in each personnel grouping at McLane Stadium in Waco, Texas. Please note that this does count plays that were nullified due to penalty.

Kansas has success in 11 personnel again

My first takeaway after charting this information for the second game in a row was KU’s success in 11 personnel.

In Week 1, the Jayhawks only had 11 plays in this grouping and turned that into 140 total yards. That level of production probably played a part in KU using that look more often this past weekend, even if it wasn’t as efficient against a Big 12 defense.

What is interesting is that the Jayhawks only had one negative play in 11 personnel, despite it being their most-used formation against the Bears.

The biggest play of the night — a 23-yard connection between Jalon Daniels and Stephon Robinson — came in this grouping. Kansas had four other double-digit yardage plays in 11 personnel, matching the number of explosive plays earned in the rest of the formations combined.

Williams lined up as receiver on eight plays in the first half alone, including the first play of the game. But this look didn't really lead to much production, like I originally thought it might after KU used it a few times against Coastal.

Kansas picked up 34 total yards on the nine plays that Williams was at receiver. Velton Gardner’s 18-yard drive on the fifth possession of the game was the best play of the night in this particular look.

My guess was that defenses would have to shift their attention with Williams at receiver, and it would open up running lanes, but the results against Baylor don’t indicate that was the case. It’s only one game, so perhaps it will have more success down the road.

Wildcat shows up for the first time this season

It didn’t take long for Kansas to show us a different formation on offense.

KU ran the wildcat with Velton Gardner as the player receiving the snap on the second play of the game. Gardner proceeded to pick up 10 yards and a first down on 2nd-and-8, on what was the first wildcat snap of the year for Kansas.

Gardner only picked up four yards on 2nd-and-10, when the Jayhawks tried to go wildcat again in the third quarter.

It is curious because there was some offseason chatter about how former quarterback Torry Locklin could be in line for some of those wildcat snaps. Again, it is just one game, so we shall see if Locklin has more of a role in those situations moving forward.

Interesting that Robinson only got 14 snaps.

Did Locklin make the trip?