Defensive notes from KU football vs. Coastal Carolina in Week 1 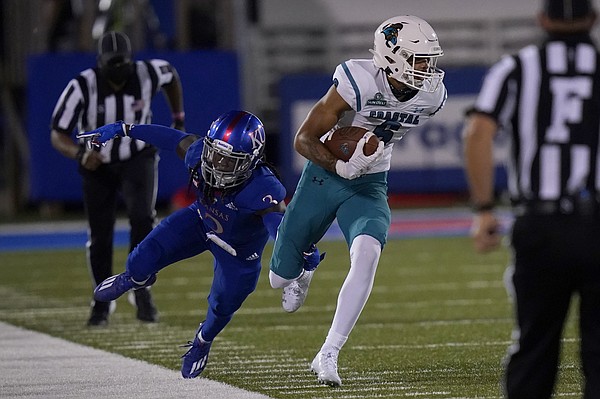 Given the roster turnover for the 2020 unit, along with the lack of practices in the spring due to the pandemic, some growing pains for KU’s defense should have been expected.

The final result for the season opener would indicate that, too, as Kansas fell at home to Coastal Carolina for the second year in a row with a 38-23 defeat. But the second half did feature some noticeable adjustments by the Jayhawks on the defensive side of the ball.

Coastal Carolina raced out to a 28-0 lead in the first half, which included three touchdowns on the team’s first three possessions of the night. The first two scores came off turnovers committed by the Kansas offense. But the Chanticleers only scored one touchdown on five second-half drives, while being forced into a pair of three-and-outs.

So what exactly changed?

Well, perhaps the biggest adjustment KU’s defense made in the second half was utilizing a fifth defensive back more frequently as opposed to rolling with its standard 3-4 base defense. It allowed senior linebacker Kyron Johnson to focus strictly on using his speed on the edge, which seemed to produce better results against Coastal’s option attack.

It remains to be seen if that tweak will be something KU can use against Big 12 foes in league play. However, in order to see what worked and what didn’t for the Kansas defense, I have compiled some notes worth sharing after watching the replay of the season opener.

Not really surprising, but Kansas used this package more than any other defensive look against CCU. In fact, the Jayhawks had this exact grouping for the entire 10-play drive on Coastal’s first possession. Kansas gave CCU this look on 19 of the first-half snaps, including 13 of the first 14 plays of the game.

It is a package commonly used when offenses run two-receiver sets, which was often the case for the Chanticleers. Coastal had most of its success in 21 personnel — two backs and one tight end — against KU’s 3-4 defense by picking up 72 total yards on 11 such plays. CCU only threw the ball six times when facing this defensive package.

The only time KU really gave CCU a different look is when it utilized a fifth defensive back. When the Jayhawks chose to do that, it usually meant bringing in safety Nate Betts and taking Parker out of the game. Betts often lined up near Parker’s position, as Coastal Carolina didn’t run many three-receiver sets.

Still, this grouping was KU’s go-to for much of the second half when it was having some success on that side of the ball. The second half featured 18 snaps with this defensive look, including a stretch of 12 consecutive plays.

Parker was usually on the sideline for this formation, but it had more to do with utilizing Johnson’s speed off the edge. CCU recorded 87 rushing yards on 15 attempts against this grouping by KU’s defense.

Kansas never used more than five defensive backs on a given snap, which probably had more to do with Coastal rarely being in third-and-long situations. KU also had seven snaps using its jumbo package in goal line situations.

It didn’t seem like KU tried to scheme up too much from a pass rushing standpoint. That could be because of the unusual offseason or it could just be that Coastal Carolina’s offense didn’t allow for many stunts and twists.

Mayberry was brought on a cornerback blitz on the first drive in what was one of the few noteworthy blitzes by the Kansas defense. There was also a delayed blitz in the third quarter that resulted in an incomplete pass on third down.

Here is a breakdown of KU’s pass rush against CCU by number of pass rushers:

Kansas did not record a single sack in the season opener and actually only finished with two tackles for a loss all night. KU’s lack of presence behind the line of scrimmage played a big part in deciding the final outcome.