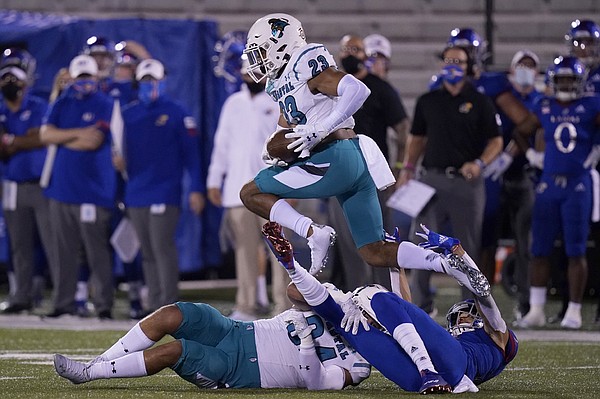 Kansas was knocked off by Coastal Carolina for the second year in a row, as an early deficit proved to be too much to overcome in a 38-23 loss Saturday night at David Booth Kansas Memorial Stadium.

It was a game that eventually ended early Sunday morning, so there wasn’t much time for figuring out what exactly went wrong. But now it is time to fully dissect how the Jayhawks, who were nearly a touchdown favorite entering the game on most online sportsbooks, let the Chanticleers upset them in Lawrence for the second consecutive season.

To help get to the bottom of KU’s loss in the 2020 season opener, let’s take a closer look at some noteworthy numbers that stood out from this game.

For this exercise, I will be using NCAA Premium stats over at Pro Football Focus. This is the first year that PFF has released such information to the public, which is available for those with a CFB subscription.

As mentioned in Sunday’s blog, the Kansas offensive line had some serious issues in the opening weekend. According to PFF, the Jayhawks had a pass blocking grade of 22.4 as a team. KU’s worst mark in that area last year was 43.2 in a 38-10 loss to Kansas State.

Every lineman contributed to a grade that low against CCU, but senior left tackle Malik Clark particularly struggled in his first game replacing Hakeem Adeniji, who is now a member of the Cincinnati Bengals. Clark had the worst mark on the team in both pass and run blocking among KU linemen.

Clark was charged with a pass rush allowed on a QB on seven of his 79 total snaps. In those seven pressures, Coastal Carolina recorded five quarterback hurries and was credited with a hit on the QB twice. It is important to note that Clark allowed seven pass rushes during the entire 2019 season, where he played 582 snaps at left guard.

So maybe it was just an off night as he adjusts to a new position.

Despite having his last name misspelled on the back of his jersey, MacVittie earned an overall offensive grade of 76.3 against the Chants in the opener. Kendrick, who didn't come into the game until the third drive, was given a mark of 55.9 by PFF.

But this is why context is important. MacVittie’s overall grade was weighted heavily by his 73.7 rushing grade, which came off three scrambles that went for 42 yards. MacVittie was also given a clean pocket more often than Kendrick.

All nine of MacVittie’s attempts came under no pressure, according to PFF. Kendrick was blitzed on nine of his 23 dropbacks, and had more pass attempts under pressure as a result. In the end, though, I’m not sure either quarterback truly separated himself despite what any numbers would suggest.

Jayhawks had success running to the right edge

The offensive line performed better in running situations, but Kansas had to throw the ball around a little more than it would have liked after getting into a 28-0 hole in the first half.

KU really had success running the ball to the right edge. Per PFF’s rushing direction stats, eight of the team’s 33 attempts were at the right end. The Jayhawks picked up 71 yards on those eight carries, good for an impressive 8.9 yards per run. Three of those runs ended in a first down and one resulted in a touchdown.

In addition, sensational running back Pooka Williams was actually only responsible for one of those eight runs. Junior right tackle Earl Bostick Jr. had a rough day in pass protection like the rest of the offensive line, but his run blocking might be worth monitoring moving forward.

Only one KU defensive player posted an overall grade higher than 70.0 while playing double-digit snaps. Junior left end Caleb Sampson finished with a defensive grade of 73.5 in 51 snaps.

Sampson’s pass rush grade stood out, as he posted a mark of 77.8 in just 18 pass rush situations. He was credited with two quarterback hurries against Coastal. For comparison, Sampson had nine QB hurries in 216 pass rush attempts in 2019.

In a game where KU’s defensive line was knocked around a bit, Sampson served as one of the few bright spots in the trenches and it could be the start of a nice leap in production for him.

Redshirt freshman Grayson McCall, a three-start dual-threat quarterback by 247Sports, was Coastal’s starting signal caller even though many thought the competition was between Bryce Carpenter and Fred Payton entering the game.

McCall may have earned a win over a Power Five program, but it probably wasn’t as good of a debut as the FS1 broadcasters made it seem like throughout the game. McCall finished with an overall offensive grade of 62.9, which was a lower mark than seven CCU offensive players with at least 48 snaps played.

As a runner, McCall had a grade of 64.5 compared to his passing mark of 57.6. McCall recorded 73 of the team’s 185 total yards on the ground, while also punching in Coastal’s two rushing touchdowns.

The concern for KU’s defense is that mobile quarterbacks were a problem for this unit last year, and that doesn’t seem to be going away in 2020.

I am NOT trying to take anything away from Grayson McCall's overall performance (this past Saturday night). But, checking both Rivals and 24/7 recruiting boards, Grayson McCall was only rated a 2 Star Dual-Threat QB (on both sites).

PFF grading of MacVittie is a case of a computer geek putting numbers into the computer just to put out a grading number.. If the computer nerd had actually watched the game. Then they would know that Kendrick Miles played an overall better game than MacVittie did.

Big 12 made the news...I noticed it because the lead pic was Big Jay sitting forlorn in the stands.

I have real empathy for LJW sportswriters who must write articles to fill space in the paper about this putrid KU Football program. To find anything positive to write about this game Where the team trailed by 28 points is certainly creative.