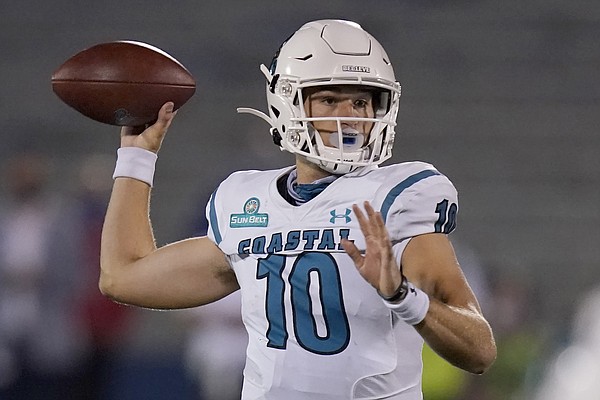 Coastal Carolina quarterback Grayson McCall (10) passes to a teammate during the first half of an NCAA college football game against Kansas in Lawrence, Kan., Saturday, Sept. 12, 2020. (AP Photo/Orlin Wagner) by Associated Press

College football is all the way back now.

Despite being nearly a touchdown favorite, Kansas was outmatched during its 38-23 home loss to Coastal Carolina Saturday night at David Booth Kansas Memorial Stadium. For the second year in a row, the Chanticleers went into Lawrence and defeated the Jayhawks.

Now after last year’s loss, KU responded by trouncing Boston College the following week. So all is not lost for the Jayhawks, who have to wait two weeks to get back on the football field. Unfortunately for Kansas, it is now Big 12 time in this pandemic-adjusted season, meaning things won’t get any easier.

There will be plenty written about the season opener in the coming weeks on our site, but I wanted to offer up my quick thoughts from last night’s game. This is before the rewatch of the game, so I will have more thoughtful analysis later in the week.

But it could be a nice exercise to go through some key takeaways off the cuff following KU’s latest loss. Feel free to share your thoughts from the opener in the comments section, as well.

Much will be made about KU’s offensive line struggles against Coastal, and for good reason. That unit up front looked disoriented in its first game without left tackle Hakeem Adeniji, who is now with the Cincinnati Bengals.

Malik Clark and Earl Bostick Jr. held down the left tackle and right tackle positions, respectively. Chris Hughes was the team’s right guard for a majority of the game, while Adagio Lopeti played left guard. Api Mane served as the team’s center for a good chunk of the contest. Jacobi Lott also played along the offensive line last night.

Yet I thought most of that unit’s issues actually came in pass protection, which was only amplified when the Jayhawks were throwing the ball more in an attempt to catch up. In particular, the tackles really seemed to struggle in passing situations.

That will be one of the more interesting things to watch on the replay, but it almost makes you wonder if it was a technique issue. Coastal Carolina’s front seven was certainly as good as advertised, but perhaps the tackles just need to tweak how they get into their vertical sets to fix things.

Again, the tape will give us a better understanding of all that.

Staying in the trenches, Coastal Carolina’s offensive line really appeared to control things at the line of scrimmage. I wrote earlier this week how that was going to be a key matchup, and it sure played a part in deciding this outcome.

What is interesting is that the Chanticleers did end up starting true freshman William Lampkin at left guard. Coastal had to throw him out there because its senior starter opted out of the season, according to the team’s game notes. Lampkin was a three-star recruit on ESPN, so he’s certainly no slouch, but that feels like a matchup KU should have exploited more.

Kansas did not record a single sack last night, while Costal Carolina came away with three. The visitors posted a 12-2 advantage in tackles for loss, which perfectly illustrated the alarming gap between these two teams in the trenches.

In a surprising turn of events, Coastal Carolina gave redshirt freshman Grayson McCall the start at quarterback. The former three-star dual-threat quarterback certainly looked like he belonged out there, helping his team race out to a 28-0 lead within the first 29 minutes of the game.

McCall looked like a veteran while running that option attack, which Kansas struggled to have an answer for. McCall recorded 73 of the team’s 185 total yards on the ground, while also punching in Coastal’s two rushing touchdowns.

The Jayhawks struggled against mobile quarterbacks last year, so Saturday’s showing should be somewhat concerning. To be honest, Big 12 quarterbacks might expose that issue even more this fall.

Thomas MacVittie earned the start at quarterback, but Miles Kendrick had the best moments of the night as KU’s signal caller.

Kendrick, who didn’t get in the game until the third drive after two KU turnovers, didn’t seem to find a rhythm until the second half. Kendrick came in on a crucial fourth down attempt in the second half, only because MacVittie sustained an injury, and proceeded to throw a touchdown pass to Andrew Parchment.

Still, Kendrick’s best throw of the night — and what will probably be the best toss of the season — came on a 37-yard completion to Kwamie Lassiter early in the fourth quarter.

Pooka Williams lines up at WR

The FS1 broadcast made note of running back Pooka Williams lining up at wide receiver at one point in the second half.

Coastal Carolina’s defense was obviously focusing on Williams, particularly by loading the box when he was in the backfield. So moving Williams out wide shifted the defensive look a bit, allowing running back Velton Gardner to find a nice lane.

There should be more of that.

According to PFF’s NCAA Premium Stats, Williams only lined up as a wide receiver 14 times in 2019. Might be something to monitor moving forward as Kansas has to figure out ways to utilize its best weapons.

This is going to be a rough season as we transition from Bowen to a system of just high school recruits.