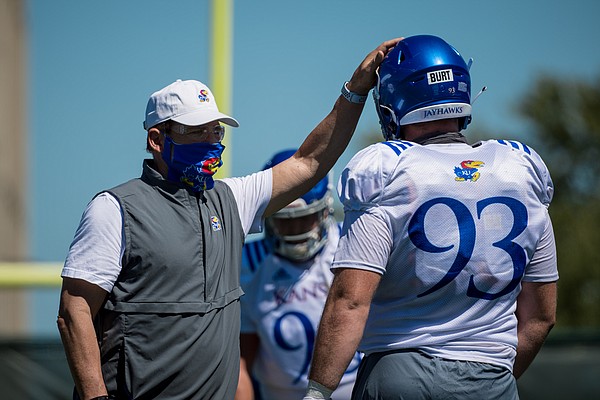 There should be intriguing matchups across the board in KU’s season opener against Coastal Carolina, which is slated for a 9 p.m. kickoff on Saturday at David Booth Kansas Memorial Stadium. But let’s turn our focus to the trenches for the purpose of this blog.

Specifically, I want to take a closer look at how the Kansas defensive line matches up with Coastal Carolina’s offensive line. And why it might ultimately decide whether or not the Jayhawks can avenge last year’s 12-7 home loss to the Chanticleers.

Coastal Carolina has 88% of its offensive production coming back, a unit that ranked fifth in the country last year during a 5-7 campaign. Four of the five men listed as starters along the offensive line — LT Antwine Loper (R-Jr.), C Sam Thompson (R-Sr.), RG Trey Carter (R-Sr.) and RT Steven Bedosky (R-Sr.) — all bring back some level of starting experience from a year ago.

Carter was the lone player of that quartet to start in all 12 games. He has started all 36 games over the first three years of his playing career, and can line up at both center and right guard. He was named to the Athlon Sports Preseason All-Sun Belt second team entering this year.

“I believe we do have an advantage there,” Carter said of his team’s experience at offensive line on this week’s zoom call with reporters. “I think we will be able to get after them some. We will see how they respond when they get hit in the mouth.”

Senior Jack Franklin, the only other returning lineman to start all 12 games a year ago, was listed as the team’s starting left guard on the initial depth chart. However, he has opted out of the 2020 season according to Coastal Carolina’s game notes. True freshman Willie Lampkin is considered the next in line at left guard, which could be intriguing if he actually was to end up starting.

But the Chants have returners at every other position up front. Loper made six starts at right tackle, and will move over to the left side for his junior campaign. Thompson also recorded 10 starts last season. Bedosky actually saw the least amount of action with two starts, but that’s only because he sustained a season-ending injury during last year’s meeting in Lawrence.

“Bedosky is a guy that is going to have a good season,” Carter said. “He got hurt last year in the Kansas game and missed the rest of the season, so that's a guy that will probably jump out at you a little bit."

Kansas, meanwhile, has junior Malcolm Lee and junior Caleb Sampson listed as the starting defensive ends. Junior Sam Burt rounds out that 3-4 front as the starting nose tackle. Three freshmen are then listed as the immediate backups at all three spots along that defensive line. Redshirt freshman Steven Parker is expected to start at the “Jack” position for KU, too.

On the surface, it would appear that Coastal Carolina has a significant edge based on experience alone. But even the Chanticleers understand that the Jayhawks have the type of athletes that are not as common in the Sun Belt Conference.

“They have big guys,” Carter said. “They do have good young players, so I'm excited to see how we shape up against them."

While Coastal Carolina might have the upper hand experience wise, continuity might not guarantee success based on what transpired last year.

According to the PFF’s NCAA Premium Stats, Coastal Carolina posted a pass blocking grade of 50.4. Only 10 teams in all of college football had a lower mark than the Chants. They fared a little better in run blocking, recording a grade of 61.6 on the year.

So it’s no secret that the Chanticleers will try to lean on the ground game this weekend against KU’s defense. Running back CJ Marable, who had 148 yards in last year’s meeting against Kansas, is back after a 1,000-yard campaign on the ground.

“We want to be the most physical team out there and we want to be able to run the football,” Carter said. “That's definitely a big thing for us."

It remains to be seen if Coastal Carolina will do just that. But it might have a big impact on which team comes out on top on Saturday.