Getting to know: Coastal Carolina football 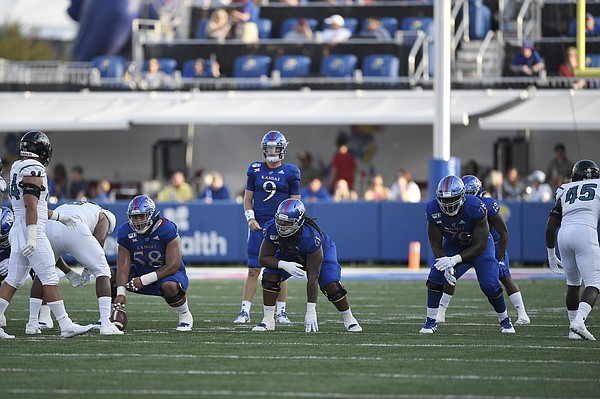 Kansas quarterback Carter Stanley surveys the field before a snap, as members of KU's offensive line do the same. by Mike Gunnoe

Coastal Carolina needs no introduction after what took place last year. The Chanticleers came into Lawrence and earned their first-ever victory over a Power Five program with a 12-7 win.

The Jayhawks want to avenge last year’s poor performance, and they will get the opportunity to do so on national television in a late-night matchup. Kickoff is slated for 9 p.m. at David Booth Kansas Memorial Stadium, and the game will be on FS1 with Tim Brando (play-by-play) and Spencer Tillman (analyst) on the call.

Many of the players responsible for Coastal Carolina’s upset victory in 2019 are expected to be back this weekend. The Chants are bringing back 75% of their production from a 5-7 squad, a number that ranks 19th in the country in total returning production.

Perhaps even more impressive, the Chanticleers have 88% of their offensive production returning from a unit that ranked fifth in the country last year.

As a result, ESPN’s Football Power Index actually believes Coastal Carolina should be a slight favorite in the season opener. KU has a 46.3% chance of victory according to FPI.

So let’s take a closer look at the Chants to determine whether or not the Jayhawks will begin Year 2 of the Les Miles era with a victory.

Quarterback — Like Kansas, Coastal Carolina hasn’t announced a starter at the game’s most-important position. The difference is that the Chants have supposedly decided on their guy between Fred Payton and Bryce Carpenter, but are just choosing to not reveal that to the public.

Both quarterbacks saw action under center last season. Payton went 119-for-187 through the air for 1,421 yards and 12 touchdowns. Carpenter completed 93 of his 142 pass attempts for 927 yards and eight scores.

Running backs — The Jayhawks should be familiar with senior running back CJ Marable, who carved them up for 148 rushing yards and one score on 24 attempts during last year’s meeting. Eight of Marable’s 24 carries ended with either a first down or a touchdown. He also recorded a 20-yard touchdown grab in the second quarter for his lone reception of the game.

Receivers — Coastal Carolina has its top-three receiving threats back this year and had steady hands as a unit overall. According to Pro Football Focus, the Chants ranked fourth in all of college football with a drop rate of 1.7% in 2019. Tight end Isaiah Likely figures to have KU’s attention this week, as the 6-foot-4, 245-pound junior has caught a pass in 15 consecutive games.

Offensive line — Four of the five men listed as starters along the offensive line — LT Antwine Loper (R-Jr.), C Sam Thompson (R-Sr.), RG Trey Carter (R-Sr.) and RT Steven Bedosky (R-Sr.) — all bring back some level of starting experience from a year ago. Carter, in particular, has started all 36 games of his career and was named to the Athlon Sports Preseason All-Sun Belt second team entering this season.

Of note, senior Jack Franklin was slated to start at left guard after doing so in all 12 games in 2019. According to Coastal Carolina’s games note, Franklin has opted out of the 2020 season and true freshman Willie Lampkin is listed as his immediate backup.

Defensive line — The Chanticleers have a strong front seven, and it all starts on the defensive line for them. Returners Tarron Jackson and C.J. Brewer were both named preseason All-Sun Belt by the league’s coaches entering this year. Jackson set a new Coastal single-season record with 10 sacks. Brewer ranked third on the team in stops with 54 total tackles, and was credited with seven quarterback hurries.

Linebackers — Coastal Carolina has an experienced group behind that defensive line, too. Senior Teddy Gallagher, redshirt senior Silas Kelly and Jeffrey Gunter are all expected to produce at that position. Gallagher led the team and ranked 10th in the Sun Belt in total tackles with 88 last year. His average of 8.9 stops per game in conference play ranked fifth in the league.

Secondary — Juniors Derick Bush and D’Jordan Strong are slated to start at the cornerback spots. Redshirt juniors Brayden Matts and Alex Spillum are listed as starters at free safety and strong safety, respectively. Coastal Carolina recorded two interceptions in last year’s meeting to help hold Kansas scoreless over the final 56:32 of the game.

SPECIAL TEAMS — Junior Massimo Biscardi, who has gone 28-of-36 on field goal attempts in his career, will be the team's placekicker for the third year in a row. Junior punter Myles Prosser is also back, and was even named to the Ray Guy Award watch list for the second-straight season.

VEGAS SAYS… This line has settled in with Kansas being a 6.5-point favorite over Coastal Carolina via FanDuel’s Sportsbook.

I know I made a big deal about being surprised by the line earlier this week, especially one that jumped 3.5 points in KU’s favor within 24 hours, but my pick is for Kansas to get its revenge by winning and covering the spread. I guess I’m a fraud. For the record, I do feel more confident in betting the over (55.5) than picking a side.

Both defensive units are bad, which means there should be a lot more points scored in this one compared to last year. So I’m taking a Brent Dearmon-led offense in a shootout against a Sun Belt foe, regardless of who the quarterback is for KU.

The numbers for CC sound impressive but this is a team that went 5-7 in the Sun Belt. For most P5 programs this would be the cupcake on their schedule before conference play begins. If we had played them in the middle of the season I’m pretty sure we would have gotten the W.