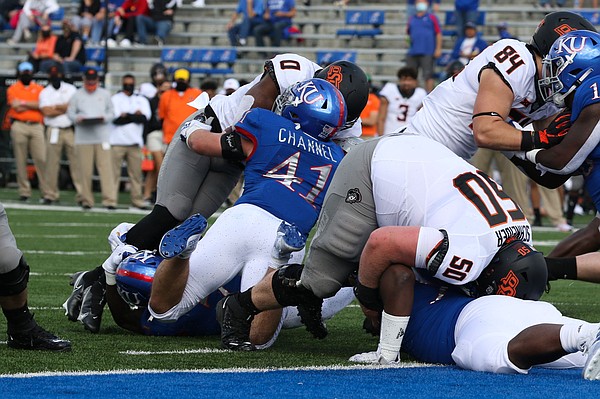 So it looks like I missed an interesting game on Saturday, when the Kansas football team was crushed by Oklahoma State, 47-7, at David Booth Kansas Memorial Stadium.

I was busy covering a different game in Lawrence at the time, which is why my initial takeaways are out a little later than usual. Normally, I’ll try to have this blog out before watching the replay of the KU game like I did during the first two games of the season.

But since I didn’t get the privilege of watching the game live, these takeaways are from watching the replay of the game on Sunday. I decided to focus on plays from the first half, since the game got out of hand pretty quickly.

As always, feel free to share your own thoughts on the game in the comments section.

Jayhawks too conservative with Jalon Daniels

I mentioned this on the podcast last week, but I thought KU’s coaching staff was a bit too conservative with Jalon Daniels against Baylor. Part of that can be expected, of course, because you don’t want to overwhelm a 17-year-old true freshman quarterback.

But we all saw Daniels’ arm strength, and we have seen glimpses of his playmaking ability as a runner. In order for Kansas to at least be competitive in Big 12 play with Daniels under center, this staff can’t be afraid to figure out ways to better utilize those strengths.

KU called a couple read options for Daniels on the four possessions that he was in the game, which is something that I’m not convinced happened much against Baylor. In both instances, Daniels made the correct read and perhaps would have had a big play on one attempt if right tackle Earl Bostick Jr. maintained a block.

For me, the lack of deep pass attempts was the concerning part. There is something to be said about getting a young signal caller some confidence with some easy completions. On the first play of the game, he was off target on a screen pass to Andrew Parchment that carried the receiver too far back.

Scott Chasen of 247Sports broke this down on his Twitter account really well, but here’s the video of that first play anyway:

That being said, there was no real attempt to threaten Oklahoma State over the top when Daniels was in the game.

All five of Daniels’ pass attempts were short of the first-down marker, as he averaged 0.4 yards per attempt. This screenshot from PFF’s NCAA Premium Stats should help illustrate that:

In fact, I don’t think Daniels’ first read was ever supposed to be beyond the first-down marker on all seven of his dropbacks. He was sacked twice, so it’s hard to know for certain if that is true, but here are both of those plays:

On the first one, Daniels was looking Kwamie Lassiter’s way initially and probably should have fired a pass before the Oklahoma State blitz got to him.

It is tougher to tell on the second play, but Daniels abandoned the pocket too soon. The latter sequence is probably the only one where I’d argue the primary target might have gone beyond 10 yards, however.

What’s interesting is the game plan didn’t seem to change much when Miles Kendrick came in for Daniels. Per PFF’s passing direction chart, Kendrick only attempted two passes that went 10-plus yards against Oklahoma State.

Not entirely sure why that would be KU’s plan of attack, particularly with Daniels’ ability to take deep shots or complete passes along the sideline. But it seemed too conservative against one of the better teams in the Big 12.

Sam Burt pushed around early on

There is no need to sugarcoat it, senior nose tackle Sam Burt was a liability for KU’s defense in the first half. While Burt only played 36 snaps, per PFF, it was noticeable when he was out on the field.

If you watch closely, you can see Burt shoot the gap to his right on 4th-and-1 on Oklahoma State’s opening possession. OSU center Ry Schneider, a redshirt senior who came to the program as a walk-on, simply took Burt out of the play. The Cowboys converted on a short run up the middle.

It is hard to fault Burt too much in that situation, but it was a sign of things to come. Later in that drive, Oklahoma State converted on 3rd-and-2 by creating a wide running lane. Burt was completely pushed back and out of position.

Oklahoma State converts on 3rd and 2 on first drive vs. KU by Shane Jackson

A similar sequence took place on 1st-and-10 on Oklahoma State’s sixth possession of the game. Schneider completely removed Burt by simply using his momentum from shooting the ‘A gap’ on what ended up looking like an all-too easy run by the Cowboys.

As a result, Kansas ended up using freshman DaJon Terry more at nose tackle against Oklahoma State. Terry had nice pressure on a pass play in the first quarter that forced OSU to hold him, rather than let him get to the quarterback for a sack.

Nick Channel was a nice surprise

At least early on, Nick Channel’s name was mentioned a lot on the broadcast. The sophomore from Wichita made a few nice plays in some key moments for the Jayhawks before the game got out of hand.

Channel and Davon Ferguson were responsible for a big stop at the goal line, forcing the Cowboys to settle for a field on their opening trip. Ferguson deserves most of the credit for this play, but Channel contributed to one of the better plays by the Kansas defense.

Channel delivered a pair of noteworthy plays on Oklahoma State’s second drive of the game. The first play was a nice recovery by Channel, who probably was out of position after his initial steps at the snap.

But Channel was able to recover, and came charging up to make a stop at the line of scrimmage.

Moments later, Channel recorded a sack on a delayed blitz on 3rd-and-10 to get the OSU offense off the field.

Kansas doesn’t seem to run many twists/stunts as a defense, but the delayed linebacker blitz is somewhat common. Off the top of my head, I remember Dru Prox coming up with a big sack against West Virginia in a similar situation.

Prox later admitted that it was his decision to go after the quarterback, so maybe that is what happened here. Channel might have been responsible for the running back, and then decided to take advantage when he saw an opening.

Don’t agree with decision to use Pooka as returner

The decision to use running back Pooka Williams as a returner is not one I agree with.

It is understandable that the Jayhawks want to do whatever they can to get the ball in the hands of their best player. The final box score even shows Pooka had success, accumulating 105 yards on six kickoff returns.

But Williams is too valuable on KU’s offense, and I think the risk outweighs the reward in this situation. Williams took a big hit on an early return that really highlighted this concern.

We all know what Pooka can do in space, and I’m all for finding creative ways to get him the ball. He even had success as a returner during his freshman campaign, averaging 22.4 yard per return on 11 opportunities.

But this year’s offense should revolve around Williams, and that is why the risk isn’t worth it. Williams has already appeared shaken up multiple times through three games, so I don’t see any reason to put him in more situations where he could take a big hit.

Especially when it is hard to imagine these returns leading to points on the scoreboard.

Seems to me that deep passes require enough time for the receivers to get downfield before the QB is forced to make a play, either with his arm or his feet. Until we have an O-line that can give the QB a little more time we're not likely to see many deep throws. If he tries to prance around enough to buy that time he just gets sacked.

Brother, you must be getting tired of KU football. I thought your analysis was wrong. The only thing you got right was KU got beat. Okay, I am exaggerating a bit. Yes, I agree the coaches need to let Daniels throw the ball. Yes, I think he panics a little when he looks down field and sees everybody covered. Keep giving him reps and give him someone to dump it too if everybody is covered downfield (e.g., watch Tom Brady).

I believe by the end of the season the team will be playing better.

I think you're spot on in both of your major points, Shane.

I was thinking the same thing about KU not throwing downfield at all. Admittedly they can't throw very far because of the horrible o-line play, but they should have at least tried some in the 10-20 yard range, which should have been possible. To throw every pass within 10 yards just made it even easier for the OSU line to focus on the run.

I also agree with not having Pooka returning kicks. Every time he did it, I was cringing and hoping he wouldn't get hurt. And with KU's blocking being as bad as it is, the chances of him springing one are extremely small and definitely not worth the risk.

This is good analysis, you have to appreciate KUs unique approach to limiting attendance, although not on purpose.

The gameplan should fit the talent, and the talent isn't there, yet. Daniels looks good but its gonna take some time.