A look at KU's rushing direction numbers through 5 games 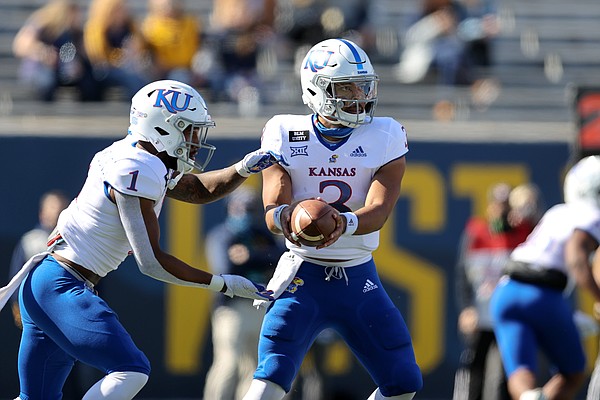 MORGANTOWN, WV - OCTOBER 17: Kansas Jayhawks quarterback Miles Kendrick (3) hands off to Kansas Jayhawks running back Pooka Williams Jr. (1) during the first quarter of the college football game between the Kansas Jayhawks and the West Virginia Mountaineers on October 17, 2020, at Mountaineer Field at Milan Puskar Stadium in Morgantown, WV. by Photo by Frank Jansky/Icon Sportswire

It is no secret that the Kansas football team has struggled to run the ball in 2020.

With or without standout running back Pooka Williams Jr., the Jayhawks have not been able to get much going on the ground game. Kansas has failed to reach 100 rushing yards in back-to-back games, including the team’s first contest without Williams this past weekend in a 55-14 road loss to Kansas State.

Benton Smith wrote about all this on Sunday, in case you missed it.

But to get a full understanding of how the Jayhawks have performed in the run game, let’s take a closer look at their numbers based on rushing direction. The idea of this blog came from a tweet via Frank Saunders, who is a favorite for the KU sports staff because of his number of quality questions for our weekly podcast.

Fortunately for us, and to save me from going back and doing a lot of charting, Pro Football Focus keeps track of this data for those subscribed to NCAA Premium Stats. So let’s take a look at what this information tells us about KU’s rushing direction numbers through five games.

Of note, here is a key at the specific gaps and how they are labeled by PFF:

So what does this information tell us?

For starters, this offense obviously prefers to get its running backs the ball on the edge. A total of 61 of KU’s 167 rush attempts have gone toward the left or right end of the defense. That makes a lot of sense given the skill sets of the Kansas running backs.

Sophomore Velton Gardner, in particular, has 16 attempts for 94 yards toward the right end and 11 attempts for 37 yards in the direction of the left end. Gardner’s 61-yard run, the longest carry by a KU player this season, was labeled as a right end run by PFF.

That being said, the third-most attempts by the Jayhawks have gone to the right of the center. The 21 “MR” runs have turned into 106 yards, including four double-digit yardage plays. KU has picked up seven first downs on such carries, which is the second-highest clip behind eight first downs on running plays toward the right end.

Williams was responsible for most of these runs, though freshman tailback Daniel Hishaw Jr. has had some success on runs in this gap. Hishaw has 36 yards on four “MR” attempts, picking up two first downs in the process.

True freshman signal caller Jalon Daniels, meanwhile, is responsible for 16 of the 22 quarterback scrambles by Kansas. He has recorded 77 yards on his scrambles, while netting three first downs for the Jayhawks.

Daniels led the team with 17 rushing attempts against Kansas, which was his first game back from injury. Of those 17 runs, 10 of them were listed as scrambles by PFF and resulted in 37 total yards on the ground.

KU head coach Les Miles said earlier this week that Daniels will be the team’s quarterback moving forward. So it will be interesting to see if the freshman will be more involved in the designed run game based on his success as a scrambler.

And, honestly, that’s all this exercise was supposed to accomplish.

It has only been five games, but hopefully these numbers help show where the Jayhawks have done well — and where they haven’t — in the run game. Maybe KU will switch things up over the final five games, and it could be worth revisiting at the end of the season.

Either way, a big thank you for the suggestion to a loyal reader of this site. This was fun.