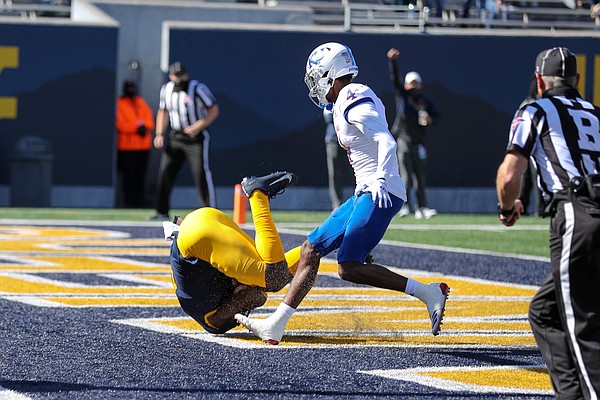 Kansas hung around for nearly three full quarters before West Virginia eventually pulled away for a 38-17 win Saturday afternoon in Morgantown. But, for the first time all year, it was a sign of progress for the Jayhawks.

This past weekend was the first time Kansas really was competitive in 2020. Sure, the final score for the season opener against Coastal Carolina might have been closer, but this was the first performance that should give some reason for optimism for KU fans.

All of that is really a credit to the Jayhawks’ effort on the defensive side of the ball. With many young players making plays, it provided a glimpse of the potential for the Kansas defense.

KU recorded its first two takeaways of the year, and managed to hold West Virginia to just one score on its opening six possessions of the contest.

Eventually the Mountaineers found some success, though that’s more on the Jayhawks’ offense for not being able to get into any sort of rhythm all afternoon. Because of that, let’s take a closer look at what the defense showed us — both good and bad — during KU’s latest defeat.

How impressive a healthy Dru Prox can be

It took just one play for junior linebacker Dru Prox to make his presence felt after missing the Oklahoma State game last time out.

Prox came on a blitz on the first offensive snap, as West Virginia quarterback Jarret Doege took a deep shot. Within two seconds of the snap, Prox had already got around the edge of the left tackle. Prox ended up reaching the quarterback right as the ball was leaving Doege’s hand.

It was a sign of things to come for Prox, who found himself in the backfield on multiple occasions. He came through with a sack on another four-man rush on 3rd & 10 at the 3:49 mark in the first period.

Prox simply beat the left guard in a one-on-one situation to record the third sack of his career, which marked his first in 2020. Prox attacked the outside shoulder of the left guard, and ripped through the initial hand punch at the point of attack.

Prox did a great job of wasting little movement, too, attacking the quarterback with a purpose.

Dru Prox with a sack at WVU by Shane Jackson

Prox ended up filling the stat sheet, something that was common before he was sidelined with a season-ending injury last year. Prox registered a career-high three TFLs on his way to an eight-tackle performance. He was also credited with two quarterback hurries.

Stats aside, the play that really illustrated Prox’s impact came with 1:05 left to play in the first half.

Running back Leddie Brown lined up to the left of the quarterback, but was motioned to the right of the signal caller just before the snap. It was by design, as the ball was going to Brown on a swing route to the right.

Prox followed Brown toward the sideline, while taking a few steps forward in the process, right after the snap. As soon as the quarterback threw the ball that direction, Prox charged completely upfield. Prox met Brown at the catch, stuffing him for a 4-yard loss on the play.

That instinct and sudden footwork have honestly been what KU is missing when Prox isn’t involved in the linebacker unit. In fact, WVU ran a HB swing to the right a few plays later, but the linebacker wasn’t as quick getting to the ball and it resulted in positive yardage.

Especially when healthy, Prox brings a certain level of stability in the middle of the Kansas defense. He might not be in the backfield as often as he was on Saturday, but Prox’s instincts are unmatched and it leads to him being around the ball on a consistent basis.

While the defense played fairly well for the most part, Kansas really struggled to stop West Virginia’s screen game on Saturday.

According to NCAA Premium Stats over at Pro Football Focus, nine of Doege’s 26 completions came on passes thrown behind the line of scrimmage. He was 9-for-12 for 63 total yards on passes marked behind the LOS, which includes one that went for a touchdown and one that resulted in an interception.

For comparison, Doege finished the game by going 26-for-44 through the air to record 318 passing yards and three scores.

It just seemed like whenever Kansas sent a fourth or even a fifth rusher, West Virginia knew it was coming and had a screen pass called. The most notable play happened on 3rd-and-13 early in the second quarter, when Kyron Johnson came off the right edge as part of a four-man rush.

That play resulted in a 16-yard pickup for running back Alec Sinkfield, who actually did a nice job of letting his blocks set up to make it a bigger gain. It was one of three WVU screens that went for double-digit yardage in the first half alone.

Kansas must have made an adjustment at halftime, because West Virginia didn’t pick up double-digit yardage on a screen over the final two quarters. In fact, Malcolm Lee’s first-career interception happened because he read a screen perfectly.

Lee took a few steps forward before realizing that the offensive line was letting him through. But Lee made a nice adjustment, and was able to get in position to make a play when the ball was thrown. Lee stepped in front of the receiver to intercept the pass on a ball that was thrown toward his inside shoulder.

Cornerbacks, especially those playing in the Big 12, have to learn to forget the bad moments. Quarterbacks and receivers in this conference are going to make defensive backs look silly every now and then.

That’s what stood out about Elijah Jones’ performance on Saturday. The 6-foot-1, 185-pound senior cornerback delivered two of his best plays immediately after two of his bigger mistakes on the day.

Jones was in coverage on West Virginia’s first score of the game. Bryce Ford-Wheaton got behind Jones on a post route for a 33-yard touchdown pass at the 4:53 mark in the first quarter. Jones was late to the top of the route by just a step, and it made all the difference in man-to-man coverage on the outside receiver.

On the first play of West Virginia’s next drive, though, Jones responded with an impressive pass breakup.

The ball went to Ford-Wheaton’s hands on a deep shot down the sideline, but Jones did an excellent job of never giving up. Jones got his hands in there to poke the ball free to force the incomplete pass.

Two possessions later, Jones was called for pass interference trying to make a play on a ball intended for his man on 1st-and-10. The penalty gifted the Mountaineers 15 yards, advancing them to the Jayhawks’ 34-yard line.

West Virginia threw a screen to the receiver on the very next play, but Jones was there to make the stop. He made a remarkable open-field tackle, forcing West Virginia to lose one yard on the play.

The screen game is designed to get individual matchups like that, so credit to Jones for making the play when his team needed it.

Open-field tackle by Elijah Jones at WVU by Shane Jackson

Jones received the highest defensive grade by PFF for KU in that game, earning an overall mark of 78.1 in the loss. Per PFF, Jones was targeted seven times and only allowed three receptions for 40 yards.

But those two plays stood out to me because Jones made a mistake right before each of those memorable moments. That is a necessary trait for any quality cornerback, but not one that every player has.