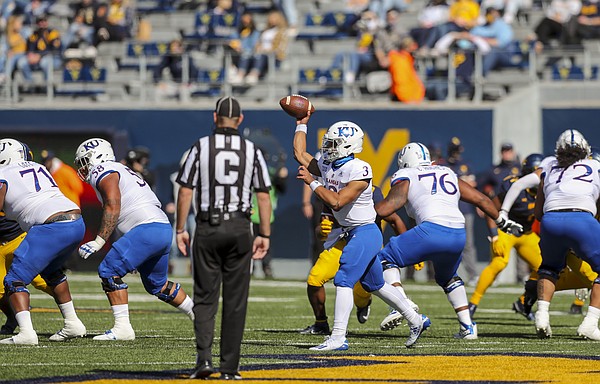 Kansas remains winless on the year following a 38-17 road loss to West Virginia Saturday afternoon in Morgantown. The Jayhawks are now 0-4 on the year, which includes an 0-3 clip in Big 12 action.

But maybe the latest loss was a sign of progress for the Jayhawks? At least that might be the case when comparing this performance to their previous two conference defeats. KU finally covered the spread for the first time all year, as it was a 21.5-point underdog against WVU.

For nearly three full quarters, the game was at least competitive. Leddie Brown iced the game with an 87-yard touchdown run to put the Mountaineers up 24-10 at the 3:37 mark in the third quarter.

KU’s defense deserves a ton of credit for keeping the team within striking distance up until that point. Yet the offense did the Jayhawks no favors, failing to find any sort of rhythm all day.

That actually leads me to my first main takeaway from KU’s latest defeat.

Kansas offense struggles on 3rd down

The Jayhawks weren’t able to sustain many drives on offense, and that’s because they struggled to convert on third down. Kansas went 2-for-13 on third down in the loss to WVU, with one conversion happening on the first drive of the game.

Joshua Eargle, who served as the acting head coach for Les Miles this past weekend, acknowledged the team’s struggles on third down in his postgame interview. Eargle believes KU has to do a better job on first or second down to get in more manageable third-down opportunities. He might have a point, too.

Kansas faced 3rd-and-10 or longer on six of its 13 third-down plays. Put it another way, KU only had three plays where it faced 3rd-and-5 or shorter. In fact, the Jayhawks had an average of 9.31 yards to go on their 13 total third-down opportunities.

To make it worse, KU rarely had any semblance of success on these plays. Kansas averaged 1.69 yards per play on its 13 such snaps. A seven-yard pass to Pooka Williams on 3rd-and-16 in the second quarter and a seven-yard pass to Andrew Parchment on 3rd-and-6 in the fourth quarter were the two longest plays by Kansas on third down.

Quarterback Miles Kendrick was also sacked three different times on third down, all three of which were obvious passing situations. So, yes, the Jayhawks could do a better job of getting into more manageable situations on third down. But there also weren't many positive plays when they were able to do so.

KU’s play calling is called out on broadcast

With Kansas at West Virginia being the only Big 12 game on Saturday, we got the pleasure of listening to Gus Johnson and Joel Klatt on the call in a game nationally televised on Fox.

Klatt had made a few comments about KU's play calling throughout the game, but he certainly made his opinion known with an interesting point in the fourth quarter. On 3rd-and-2, Velton Gardner was denied a first down on a short run over the middle. That’s when Klatt turned his attention to the play call.

“This is one of those definitions of insanity for me watching a play call like that on third-and-short,” Klatt said on the Fox broadcast. “There is nothing — whether it’s on film all year or today — that would suggest you can get in the shotgun and just hand the ball up the middle if you are Kansas and get that first down. So why call that play?”

"Why call that play?"

After Kansas failed to convert with a run up the middle, Joel Klatt pointed out that there was nothing on film that indicated that play would be successful, so why call it? #kufball pic.twitter.com/XNc1EPZqSK

Without being in the huddle, it is hard to know what exactly the play call was. It looks like it could have been an option, in which maybe Kendrick made the wrong read since the left end comes crashing down. There wasn't an unblocked player though, so maybe it wasn't a read after all.

That said, it was probably the first real sign of public criticism for offensive coordinator Brent Dearmon.

Dearmon took over as KU’s play caller midway through last year, and the team had a lot of success right away. The Jayhawks scored 48 points in a narrow loss at Texas in Dearmon’s first game calling plays. They then posted 37 points in a win over Texas Tech the following week.

Since then, Kansas has scored a total of 121 points over its previous eight games for an average of 15.1 points per contest. KU has only scored more than 17 points in a game in two of those eight outings, which includes a 23-point effort in the 2020 season opener against Coastal Carolina.

None of that is to suggest Dearmon deserves all the blame for KU’s offensive struggles.

This offseason was supposed to be Dearmon's chance to implement his offense, which was obviously impacted by a pandemic. The Jayhawks have played three different quarterbacks this year, and don’t seem to have an answer there. The offensive line has been abysmal in pass protection for much of the season.

Still, it does make me wonder if the hype got a bit out of control after Dearmon’s first two games. I know I was guilty of that too. At one point, I thought KU might lose Dearmon after the 2019 season.

I just think we all forgot that this is his first opportunity to be a play caller for a Power Five program. There will be growing pains, and a proper evaluation of Dearmon shouldn’t really take place until he has his quarterback behind a competent o-line.

But Dearmon shouldn't be able to avoid any criticism either, especially when the offense has played as poorly as it has. Klatt’s commentary late in Saturday's game was proof of that.

Jayhawks' decision to close the first half

It was a subtle sequence to end the first half, but one that I think is worth circling back to.

West Virginia took a 17-10 lead into the half following an 8-play, 53-yard drive in the final minute of the second quarter. The possession ended with a 33-yard field goal by Evan Staley with 16 seconds remaining in the first half.

Yet Kansas made an interesting decision on the play just before that field goal. On 3rd-and-10, quarterback Jarret Doege threw an incomplete pass while targeting Ali Jennings. WVU was called for holding on that play, but KU chose to decline the penalty.

It obviously didn’t end up mattering, but I thought Kansas might have considered accepting the penalty. After all, Staley had missed a 44-yard field goal earlier in the second period and there was a chance he would have ended up with another attempt in that range.

Because Kansas had surrendered a few big plays on screen passes already to that point, there is a good chance that the coaching staff made the right call. It is hard to argue with the Jayhawks being content with a one-score deficit at the intermission in a game where they were more than a three-touchdown underdog.

I just thought KU’s coaching staff would have considered accepting the penalty in the moment. Perhaps the Kansas staff will if a similar situation presents itself again down the road.

In defense of Dearmon, we have to remember that until the o-line can buy a few seconds, not much in the way of offense is going to work. For a microphone jockey to verbally question a play call without knowing the inside scoop is an ignorant thing to do. But, mike jocks tend to show their ignorance in that way all too frequently, in all sports. There is a reason why they are up in the booth telling the world what they think they see rather than being down on the field where the rubber meets the road.

100% agreed with Dearmon being called out. I literally said the same thing while I watched.

He also called the hurry up snaps that absolutely failed. Not impressed with Dearmon.

Just a couple questions ... Has anyone seen a reverse run this year? or a sweep one direction - yet actual ball direction is opposite direction? I admittedly have not seen ever minute of every game ... Just wondering ... I think I understand the basic RPO concept ... but does it not include misdirection or taking advantage of defensive tendencies counter-options?