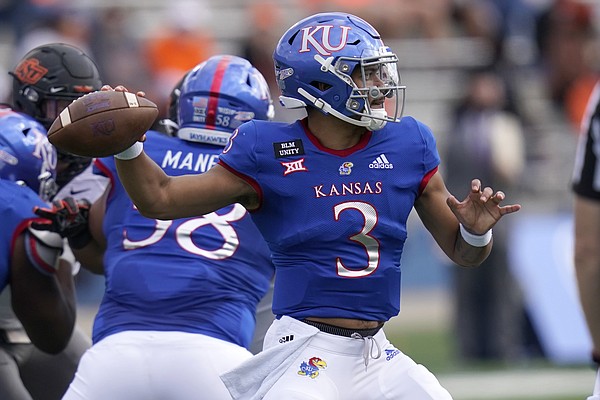 Kansas quarterback Miles Kendrick passes to a teammate during the first half of an NCAA college football game against Oklahoma State in Lawrence, Kan., Saturday, Oct. 3, 2020. by AP Photo/Orlin Wagner

It is no secret that the Kansas offense has had a slow start to the 2020 season. The Jayhawks have averaged just over 14 points per game during their 0-3 start, which includes a total of 21 points in two Big 12 defeats.

There probably isn’t one obvious solution to help get this offense back on track, but I don’t believe Kansas is attempting enough deep passes this year. That could be why the Jayhawks haven’t looked as explosive in Brent Dearmon’s second season as the play caller.

Shortly after Dearmon took over as offensive coordinator midway through the 2019 season, Kansas scored a total of 85 points in back-to-back games against Texas and Texas Tech. It was a stretch that illustrated how good a Dearmon-led offense can look when the unit is clicking.

That offense did a great job of taking advantage of specific matchups. Just when an opposing defense would load the box to stop the run, former quarterback Carter Stanley would get the ball to one of his playmaking receivers.

It is not like Stanley constantly launched the ball downfield, but he did it enough for opposing defenses to respect it.

According to PFF’s NCAA Premium Stats, Stanley attempted a pass that traveled 20-plus yards on 16.1% of his pass attempts. It was a higher percentage of deep passes than six other Big 12 quarterbacks with at least 10 attempts in 2019, including both Charlie Brewer of Baylor and Brock Purdy of Iowa State.

Stanley was 25-of-60 for 853 yards to go along 12 touchdowns and three interceptions on passes that went 20-plus yards last year. Stanley had an adjusted completion percentage of 46.7% on such passes, which is a PFF stat that essentially factors in the number of passes thrown on target. He actually ranked fourth in the Big 12 in that category.

Kansas hasn’t been nearly as effective on deep passes in 2020, but part of that is the lack of emphasis on those plays. The three quarterbacks — Thomas MacVittie, Miles Kendrick and Jalon Daniels — have completed one deep pass on eight attempts through three games.

Kendrick, who was named the starting quarterback for this week’s matchup at West Virginia, actually connected on the lone deep pass of the season. He is 1-of-4 for 37 yards on such plays this year, throwing a deep pass on just 9.3% of his total attempts.

MacVittie has the highest deep pass percentage on the team with a mark of 11.1% in the early going. For comparison, Kansas State quarterback Skylar Thompson has thrown a deep pass on 34.9% of his 63 attempts and Texas quarterback Sam Ehlinger has done so on 20.4% of his 162 attempts this year.

Some of the Kansas-related numbers can be attributed to small-sample size, of course, but the lack of deep shots was especially evident in KU’s 47-7 loss to Oklahoma State two weeks ago. Daniels did not have a single pass go beyond the first-down marker on his four possessions under center prior to his injury. Kendrick, who came in for Daniels, only had two attempts travel more than 10 yards against OSU.

There could be plenty of reasons why Kansas has failed to truly threaten opposing defenses over the top. The quarterback carousel hasn’t allowed a signal caller to find a groove. The offensive line has struggled in pass protection, limiting the number of chances to connect on a deep pass.

But until KU figures out a solution for the lack of deep passes, I don’t believe this offense will be able to reach its full potential.

Well said, Dale. And you can add in the fact that the terrible line play also contributes to the lack of a decent running game.

And as I posted earlier, as bad as those offensive numbers are, it's even worse than that because most of our yardage and points have come during garbage time.