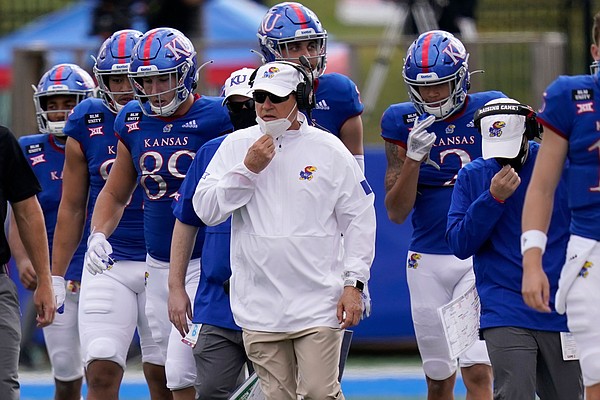 It can certainly be tough to find things to talk about on the broadcast during a blowout, which was the case in KU’s 62-9 loss to Oklahoma Saturday afternoon in Norman, Oklahoma.

At one point in the game, ESPN broadcasters Anish Shroff and Tom Luginbill had a conversation about frozen candy bars. And that discussion took place in the third quarter of a game that ultimately lasted a total of 3 hours, 46 minutes.

Then, in the fourth quarter, the conversation turned to a macro-view of the Kansas football program. In particular, Shroff and Luginbill provided their own opinion on what the Jayhawks (0-7, 0-6 Big 12) should do during a winless campaign in Year 2 of the Les Miles era.

The first of two such conversations on the broadcast took place after Gabe Brkic booted through a point-after-attempt to give the Sooners a 48-3 advantage with 14:54 left in the game.

"On the other sideline for Les Miles, Kansas (is) looking at 0-7,” said Shroff, who was the play-by-play broadcaster. “They are probably not going to win a game the rest of the way. An FPI underdog — and a big one — in their remaining games.”

According to ESPN’s Football Power Index, KU’s best chance at a win over the final three games is against Texas Tech. Kansas has a 10.7% chance of victory in that road tilt in the regular-season finale.

The Jayhawks have just a 2.4% chance of victory against Texas in their first game back from a bye week and a 4.3% chance to defeat TCU on Nov. 28.

“But you chose Les Miles to be the guy for this program,” Shroff said. “The previous coaches who came after Mark Mangino were not given long leashes.”

Shroff went on to explain how Turner Gill was only given two years in 2010 and 2011, when the Jayhawks went 5-19 over that stretch. KU won six of its 22 games in two-plus years under Charlie Weis. David Beaty posted a 6-42 record in his four years at the helm.

“Whether you believe Les Miles is the guy or not, if you are the administration, you have to give him time,” Shroff said. “You chose him. Because this is not a quick fix, this is not a three-year turnaround."

Luginbill then agreed with Shroff’s assessment about having patience with Miles.

Let’s take a look at those playbooks, for comparison.

Indiana is currently 3-0 in its fourth season under head coach Tom Allen. The Hoosiers went 5-7 in each of Allen’s first two years before going 8-5 in 2019 and being ranked as high as No. 24. IU is currently ranked No. 10 in the coaches poll, which marks its highest ranking in that poll in program history.

Kentucky, meanwhile, is 2-4 this year under head coach Mark Stoops. The Wildcats went 2-10 during Stoops’ first season in 2013, and failed to post a winning record until they went 7-6 in 2016. Kentucky posted four-straight winning seasons entering the 2020 campaign.

“If Kansas is going to attempt to do this through the high-school ranks, which I think is smart, then that's not going to happen overnight,” Luginbill said.

As of now, that seems to be the approach that Miles is taking with this team. It has led to a young roster, as 60.4% of KU’s overall roster is underclassmen. That mark ranks 27th in the country and is third in the Big 12.

That inexperience certainly was on display against a perennial Big 12 powerhouse like Oklahoma, which ultimately led to some big-picture conversations by the broadcast crew when they weren’t talking about candy bars.

Still, it is probably something to keep in mind as the 2020 season comes to a close over the next month.

Scoring breakdown by Kansas since 2010

KU's program will never be turned around by anyone. Not even Nick Saban or Bill Belichick could turn KU around.

I've moved on to bigger and better things. The rest of you should too.

That's a rather short-sighted view. I guess you weren't around when KSU was just as bad. They were so bad that Sports Illustrated identified KSU as the worst football team in the college ranks. The worst. Enter Bill Snyder.

It can and will be done. You don't do it like Weis and Beaty tried to do. Their juco "win now and damn the future" approach destroyed this team. We won't even be up to the full 85 scholarships for another year or two! And if you are actually watching the team you see how those young guys, the freshmen and sophomores, are improving and show some pretty high potential.

It's comments like Bryce's that led to Beaty shifting to the win now approach. I just hope people like this don't bother to come back when this team has it turned around in a few years. And, it will be a few years. Probably another three, at least. But it's moving in the right direction. Those close to the program said all along the second year will be the worst simply because of the attrition of all those juco players as well as graduation.

But, you really HAVEN'T moved on. Because, you're still coming back to this site and still feel compelled to post or respond to other people's comments.

Moving on means, we would NEVER hear from you again on a Kansas Jayhawks football article.

If only it were true, but somehow you keep returning - like a cold or flu virus.

When Bryce got dumped by his girlfriend he texted her every week to let her know how much he is over her.

Nice try Bryce but the opposite of hate is indifference and that clearly does not describe you. Face it, you have a major league hard on for KU football so come out of the closet and stop pretending. You’re not fooling anyone.