Getting to know: Oklahoma football 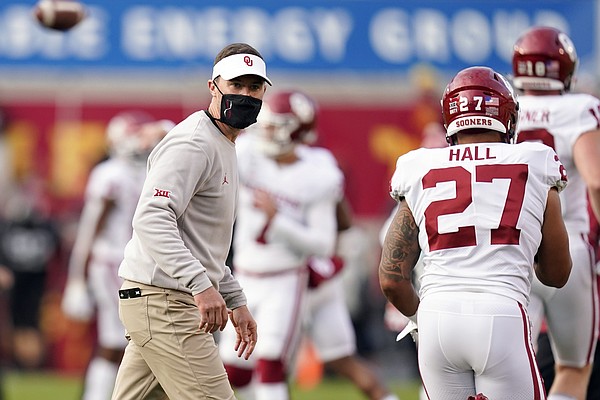 FILE - In this Saturday, Oct. 3, 2020, file photo, Oklahoma head coach Lincoln Riley watches his team warm up before an NCAA college football game against Iowa State in Ames, Iowa. The Big 12 made it to November with every team at least halfway through its reduced regular-season schedule, five-time defending conference champion Oklahoma finally on a roll, and the league probably already out of playoff contention. (AP Photo/Charlie Neibergall, File) by Associated Press

Kansas hits the road to face arguably its toughest test of what has been a daunting 2020 campaign.

Perhaps the biggest bright spot for KU’s squad has been its young defense, which will certainly have its hands full with a high-octane offense. The Sooners have scored at least 34 points in each of their last 11 games against Kansas. That is tied for the longest such streak in school history against a single opponent.

Each of the last 15 meetings in the Oklahoma-Kansas series have been OU victories by at least 15 points. The Sooners have outscored the Jayhawks 648-206 in those contests, which equates to an average margin of 43-14 over that span.

Kansas, meanwhile, has 67 total underclassmen on its team this year and that makes up about 60.4% of the overall roster. In fact, that percentage ranks 27th in the country and is third in the Big 12.

All of those numbers suggest a blowout on a Saturday afternoon. Will that be the case though? Let’s take a closer look at the Sooners to find out:

Quarterback — Redshirt freshman Spencer Rattler, the consensus No. 1 quarterback in the 2019 recruiting class, is Oklahoma’s fourth starting quarterback in as many seasons. Spoiler alert: Rattler is putting up incredible numbers just like his predecessors. For the season, Rattler is 126-for-181 for 1,806 passing yards and 17 touchdowns.

Running backs — Oklahoma has had six individuals with 1,000-yard rushing seasons over the past five years, but this team is utilizing multiple backs due to its inexperience in 2020. OU returned just 20.4% of its rushing yards and only 18.4% of its rushing touchdowns from last season.

Junior T.J. Pledger has started every game since missing the season opener, turning in a team-high 357 rushing yards and four scores. Senior Rhamondre Stevenson made his season debut against Texas Tech, scoring three times and producing 87 rushing yards on 13 carries. Freshmen tailbacks Marcus Major and Seth McGown have also been involved in the run game.

Receivers — It is another youthful unit for the Sooners. Freshman wide receiver Marvin Mims ranks second in the Big 12 and is tied for eighth in the country with six receiving touchdowns. He needs one more receiving score to tie the OU freshman record for a season, which was previously set by Mark Andrews in 2015 and CeeDee Lamb in 2017.

Defensive line — Either junior Ronnie Perkins or redshirt junior Isaiah Thomas will be the defensive end of Oklahoma’s 3-down linemen defensive look. Junior Perrion Winfrey is the starting nose guard, while senior LaRon Stokes is slated as the starting defensive tackle.

OU logged two sacks and nine tackles-for-loss last time out. Perkins made his season debut and finished with four solo tackles, and a team-high 2.0 tackles-for-loss and a quarterback hurry.

Secondary — Senior Tre Brown, a cornerback, is the lone senior in the starting secondary, per the team’s game notes. Sophomore Jaden Davis is expected to start at the other cornerback position. Juniors Delarrin Turner-Yell and Pat Fields are slated to start at strong and free safety, respectively. Junior Brendan Radley-Hiles is the team’s top nickelback.

Expect a strong start by the Sooners, who have limited their six opponents to 355 total yards in the opening 15 minutes of the game.

SPECIAL TEAMS — Redshirt sophomore kicker Gabe Brkic is 27-for-31 on career field goal attempts and has made all 78 of his PAT attempts. Brkic was the only placekicker nationally who made all of his field goals and extra-point tries in 2019. His 103 kicking points were the most by an FBS player without a miss since at least 1996.

VEGAS SAYS… I thought 28.5 points was too much last week against Iowa State, and that obviously ended up being wrong. I know Oklahoma is even better, but 38 points seems like an awful lot too. Given the fact that Kansas has yet to score more than 23 points in a game, it is scary to back this team against the spread. But give me the points — I guess.

Why is this game being nationally broadcast on ESPN?