Film room: How the Kansas defense created pressure in loss to Iowa State 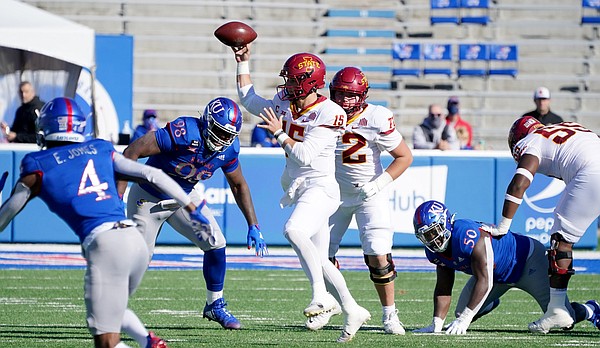 Kansas only recorded one sack in a 52-22 loss to Iowa State, but don’t let that number fool you. Iowa State quarterback Brock Purdy was far from comfortable all day, as KU had perhaps its best pass-rushing performance of the 2020 season.

In fact, PFF’s NCAA Premium stats credited the Jayhawks with a total of 13 quarterback hurries in their lopsided loss to the Cyclones. It marks KU’s best performance in that department through the first six games of the season.

Kansas recorded a total of 15 pressures on the day, per PFF, which was the team’s second-best mark of the year behind a 19-pressure outing against West Virginia. The 10 quarterback hurries against WVU was KU’s previous season-best mark until this past weekend.

But what made Saturday’s showing especially impressive was how the Jayhawks generated pressure. Second-year defensive coordinator D.J. Eliot was dialing up creative blitzes to throw a variety of different looks at Iowa State.

Redshirt freshman DaJon Terry recorded the game’s only sack by simply beating the Iowa State center in a one-on-one battle on a play where Kansas used a three-man rush. Other than that play, though, a lot of KU’s pressure came off twists/stunts and when it used four or five pass rushers.

Per my own charting, Kansas used a four-man rush on 16 of Purdy’s 36 dropbacks in the loss. The Jayhawks sent five rushers at Purdy on another 14 snaps. Purdy only faced a three-man rush five times, while Kansas sent six pass rushers once and used one seven-man blitz as well.

Breakdown of KU’s pass rush by number of rushers:

Purdy finished the day 23-for-34 for 239 yards to go along with two touchdowns and one interception. Purdy only scrambled twice, but KU’s defense certainly made the veteran signal caller uncomfortable at times.

That really is a testament to the Kansas coaching staff, and it will be interesting to see if it is a sign of things to come as a young defensive unit becomes more familiar with the playbook.

Here are a few things about KU's pass rush that stood out to me when rewatching this game:

The first play I’m showing is one that wasn’t technically on the list of Purdy’s dropbacks, which is due to a holding penalty that nullified the play. The hold might have saved Purdy from being taken down for another sack, however.

Potter deserves a ton of credit for this play, as he is able to shed off the block attempt by ISU running back Kene Nwangwu. Potter really does a great job of setting this play up by faking one direction before cutting hard the other way and ripping through the ISU tailback.

Nwangwu grabs Potter’s jersey as a last-ditch effort, which led to the official throwing the flag. But the play call — in which the two KU inside linebackers crossed at the snap — really started the whole misdirection that led to this one-on-one battle.

The Jayhawks ran a similar play in the second quarter, leading to a quarterback hurry by Potter. The running back picked up the first linebacker, giving Potter a free path to the quarterback. Potter charged upfield swiftly and forced Purdy to launch the ball out of play.

I want to highlight two different plays here to show the versatility of outside linebacker Kyron Johnson.

Kyron Johnson off edge in 2Q by Shane Jackson

There is not much to this first one. Kansas is sending five rushers on second down, but it is mostly pretty standard.

Johnson does most of the work here, using his speed to beat right tackle Jake Remsburg off the edge. Remsburg, who is 6-foot-6, 315 pounds, is a redshirt freshman from West Des Moines, Iowa.

Multiple KU players appear to beat the Iowa State o-line on this play, but it was Johnson that forced Purdy to improvise. Purdy rolled right before firing an incomplete pass because the pressure ended up being too much for him.

Yet the second play worth sharing is one where Johnson does something completely different.

As you can see, Johnson is lined up in a similar position before he ultimately drops in coverage. Johnson even breaks up the pass intended for tight end Charlie Kolar on third down, delivering a big stop for KU’s defense.

The reason why this was worth sharing is because it illustrates what a good defense should be able to do. It is important to generate pressure, but it is also just as necessary to drop players in coverage when opposing offenses might be expecting a blitz.

Johnson does a good job of being able to do both. Per PFF, Johnson was used in coverage on 26 snaps compared to 14 plays as a pass rusher against Iowa State. For the season, Johnson has been in coverage on 80 plays and went after the quarterback on 101 snaps.

Kansas didn’t use a three-man rush often, but this was my favorite such play from Saturday.

3-man rush with a creative shift vs. Iowa State by Shane Jackson

This might seem like a strange pick because Purdy really wasn’t impacted on this play, but it was the perfect call given the situation.

It was 3rd-and-23, meaning a screen would have been a reasonable play call by Iowa State. Sending too many rushers could have exposed the Jayhawks on a screen pass, which has actually been a problem at times this year.

So KU only sent three rushers, but it still kept Iowa State off balance in the process. Hayden Hatcher, who was lined up as the outside linebacker on the right side, ended up coming around all the way to the other side of the field by the end of the play.

The two Kansas defensive linemen slanted hard to the right, which would have created a perfect opportunity for Hatcher to get to the quarterback had the play taken longer to develop.

Considering the Cyclones needed 23 yards for the first down, I actually thought it was a great call by the Jayhawks.

This last one also occurred on third down, though Kansas used a few more pass rushers on this play.

This was Purdy’s second-to-last pass attempt of the afternoon, and it resulted in an incomplete on 3rd-and-10. There was really no disguise by the Jayhawks here. They showed an all-out blitz, and that is exactly what they did.

Kansas sent seven players against Iowa State’s six-man protection, meaning Purdy was going to be responsible for one player regardless. It was up to the veteran signal caller to find his hot route when he noticed this, but Purdy was obviously rushed on this play.

The Jayhawks haven’t sent that many pass rushers that often this year, so it seems plausible that Iowa State was caught off guard.

It is certainly on tape now. But I thought the entire game really showed that KU is capable of throwing a lot of different looks at an opposing offense. I think it will be interesting to see how much the playbook continues to evolve over the final month of the season.