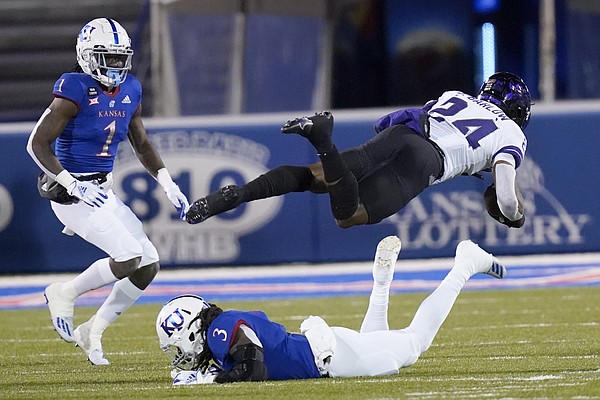 Despite having three weeks off, things pretty much stayed the same for the Kansas football team. KU got in a big hole early and never really had a shot in a 59-23 loss to TCU Saturday night at David Booth Kansas Memorial Stadium.

The Jayhawks remain winless on the year, dropping to 0-8 overall and 0-7 in Big 12 action. TCU, which had two weeks off before this week’s game, improved to 4-4 on the season and has only faced league opponents in 2020.

Particularly during this season, I've decided that not every game deserves a take and there is not always some big lesson each week. As such, you will notice that this blog is labeled three observations and not three takeaways for the first time all year.

The premise is still the same. These are three things that stood out to me, but might not always be some groundbreaking analysis. It might just be an interesting play that was worth pointing out. There is a good chance that I’m going to call this particular blog three observations for the rest of the year, so I just wanted to explain why real quick.

Now that we got that all cleared up, let’s get to it.

So the first one really is a takeaway, and one that is pretty obvious for anyone that watched the game.

TCU ended up using six different rushers to pile up 337 yards and two touchdowns on 41 attempts against the Kansas defense. The Horned Frogs averaged 8.2 yards per rush. It marked the most yards per run that the Jayhawks have allowed in a single game since they gave up 9.2 yards per run against Oklahoma on Nov. 22, 2014.

In case you somehow forgot what happened that day, OU running back Samaje Perine set an FBS record with 427 rushing yards on 34 carries against Kansas. As a team, the Sooners finished with 510 rushing yards on 55 carries that day.

So Saturday’s showing was not good to say the least. TCU was trying to attack the perimeter on a lot of its runs, but it was using plenty of zone concepts and misdirection to do so. There were a number of runs where the guard pulled the opposite way that the play was going.

What’s more, quarterback Max Duggan wasn’t even really a factor in the run game other than his 58-yard touchdown scamper late in the first half. Duggan actually entered this weekend as TCU’s rushing leader through seven games.

True freshman running back Zach Evans, who got his first-career start, notched his first 100-yard performance on just 12 carries. He helped set the tone for the Horned Frogs, who picked up at least five yards on five of their seven rushing attempts during the game’s opening drive.

Perhaps the worst particular performance by the Kansas defense came midway through the third quarter. On 3rd-and-18, TCU went with a give-up run to Darwin Barlow and he ended up netting the first down on a 21-yard run.

But, honestly, all of it was just as bad.

Someone call the authorities

Grimm was on the receiving end of a 21-yard touchdown connection with quarterback Miles Kendrick. Grimm showed excellent footwork, while demonstrating a perfect toe-tap to ensure the score.

I’m not so sure this play needed to be that difficult, considering how open the receiver was, but it was an impressive play nonetheless.

This was Grimm’s second touchdown of the day, both of which came from Kendrick. Grimm finished with four catches for 72 yards and two scores in the loss. On an offense that has lacked much reasons for optimism, Grimm has really started to emerge as a viable playmaker for KU.

While commenting on the replay of that touchdown grab on the FS1 broadcast, analyst Ben Leber credited Kendrick for providing a spark for the Kansas offense. At the time, Leber said “it’s pretty evident” that Kendrick was the best of the three quarterback options for KU.

Kendrick threw a pick-six on the very next play. He later fumbled it, leading to a scoop and score for the Horned Frogs.

If one of those three signal callers does end up taking control of the quarterback position, Grimm is looking like a reliable receiving threat.

Let’s have some fun with this last one. Freshman Garrett Jones, who got the start at center, had a few memorable plays on the night. But this one is worth highlighting for obvious reasons.

And the Oscar goes to... 😂😂 pic.twitter.com/qi0YOWMoOO

It’s a tough life being a lineman. They typically only get mentioned when they mess up, so it was worth showing this incredible sequence. It tells me that the 6-foot-2, 307-pound freshman isn’t afraid to have a little fun with this game.

That said, Jones did have some snapping issues in the loss to TCU. On multiple occasions, Jones fired a shotgun snap over the quarterback's head that essentially gave the offense no shot on a drive. This came after I noticed some low snaps by Jones in the Iowa State game.

Still, the offensive line as a whole appeared to do a better job after making some tweaks along the starting unit. It is hard to say for certain before watching the game film, but having a 100-yard rusher in Amauri Pesek-Hickson would suggest there were some running lanes created by the offensive line.

In spite of the interception and fumble, the performance by Miles was impressive. Four plays and 75 yards in under a minute had to be the best thing I’ve seen all year.

Watching TCU hand Kansas another loss (last night). I watched and was impressed with Amauri Pesek-Hickson running the ball against TCU with power.

A. Pesek-Hickson totally reminded me of former Tennessee RB Jalen Hurd running style (before Hurd decided to transfer to Baylor and become a WR)..

Kansas Jayhawks need OL'man who can consistently block and allow the Jayhawk's QB time to complete passes (and not be running for their athletic lives).