Getting to know: TCU football 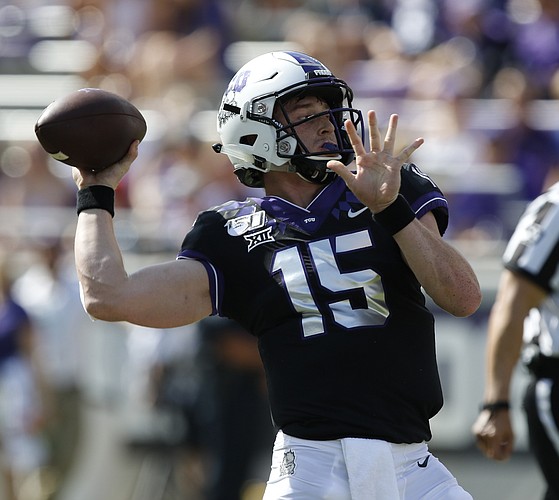 It has been three weeks since the Kansas football team stepped on the field for a real game.

So what’s a few extra hours of waiting?

Kansas is slated for an evening matchup with TCU tonight at David Booth Kansas Memorial Stadium. Kickoff is slated for 7 p.m. It has been 21 days since the Jayhawks (0-7, 0-6 Big 12) suffered a 62-9 loss to Oklahoma.

How much the extra rest will help (or hurt) KU remains to be seen. Over that stretch, Les Miles fired offensive line coach Luke Meadows and promoted senior offensive analyst John Morookian to take over that spot on an interim basis. So that unit will definitely be worth monitoring in this matchup.

TCU, meanwhile, enters this matchup with a 3-4 overall record and all of its games have come against Big 12 foes. It has been two weeks since the Horned Frogs were handed a 24-6 road loss to West Virginia.

Quarterback — Max Duggan is under center for the Horned Frogs after getting his first-career start in Week 3 of last year. He became the second true freshman signal caller to ever start at QB under Gary Patterson. Duggan has completed 63.7% of his passes this season, which is currently the fifth-best single-season mark in team history.

For the season, Duggan has gone 121-of-190 through the air for 1,274 passing yards and five touchdowns. He has also added 348 yards and six scores on 90 rushing attempts. Duggan has actually led TCU in rushing in six of his 19 career games.

Running backs — TCU has run the ball on 284 of its 502 snaps (56.6 percent) this season. The Horned Frogs have a young backfield, with junior Emari Demercado being the lone non-freshman running back on the team. Demercado caught four balls for 66 yards at WVU.

Darwin Barlow, a redshirt freshman, has started four of the last five games. Over the last three games, Barlow has 193 yards and one touchdown on 30 carries. He has 53 carries for 304 yards and three scores on the year.

Receivers — Taye Barber leads TCU with 30 receptions for 320 yards and two touchdowns this year. Barber has a catch in 12 consecutive games, the longest active streak on the team. Redshirt freshman Blair Conwright (17 receptions) and true freshman Quentin Johnston (14 caches) are second and third on the team in terms of targets in the passing attack. Johnston is averaging a team-best 17.1 yards per catch.

Offensive line — TCU’s offensive line has been changing throughout the season, but it is starting to come together. Left tackle T.J. Storment and left guard John Lanz have both been the starters in each of the last four games. Steve Avila has started at center in four consecutive contests, while Andrew Coker has held down the right tackle spot all year.

TCU’s right guard position has featured five different players, however. So watch that matchup closely in this one.

Defensive line — DE Ochaun Mathis, DT Terrell Cooper, DT Soni Misi and DE Khari Coleman have made up the four-man front in each of the last two games for the Horned Frogs. TCU has recorded a season-high five sacks in two of the last three games, which doesn’t bode well for a KU offensive line that has struggled this season. Mathis has a team-best 5.0 sacks.

Linebackers — Garret Wallow and Dee Winters have held down the starting linebacker spots all season for TCU. Wallow, who is the anchor of that strong defense, has led TCU in tackles in 14 of the last 19 games. Wallow has 261 career tackles, while the next-best defender on the team has 114 career tackles.

Secondary — TCU’s secondary also remains the same as it has been all year. Trevon Moehrig, La’Kendrick Van Zandt, and Ar’Darius Washington have all made up the safety unit in 2020. Tre’Vius Hodges-Tomlinson has started every game at cornerback.

Hodges-Tomlinson tops the Big 12 and is tied for fifth nationally with his team-best 10 pass breakups. Van Zandt leads the defense with three takeaways this season.

SPECIAL TEAMS — Sophomore Griffin Kell is 10-of-14 on field-goal attempts this season and 13-of-18 in his career. Three of his four misses this season have been blocked. Jordy Sandy, from Traralgon, Australia, is in his second year as TCU’s punter.

VEGAS SAYS… Kansas vs. the spread is the real game this season, because there is no evidence to suggest that this team can win a Big 12 contest. According to Odds Shark, KU is a 23.5-point underdog against TCU at home. It is a lot of points, but the Jayhawks simply can’t score enough to justify picking them to cover — especially against this TCU defense.

Shane: You have a good analytical mind. I and most readers have a more rudimentary understanding. Could you go over what the different nuances of the various penalties. i.e. what is the differences with line, receiver, DB , special team 'holding calls, and other issues. What the refs in different positions are looking for , etc. I know I would appreciate it, thanks.