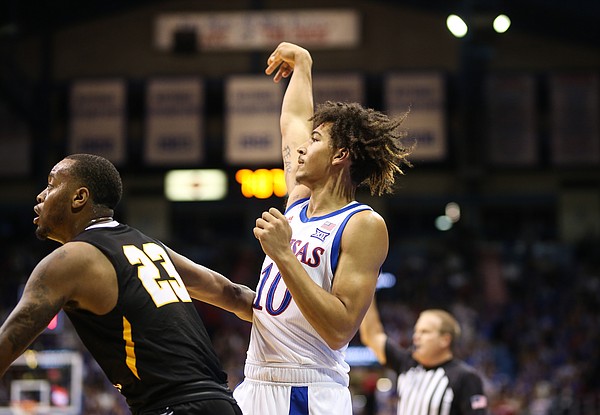 Expect the unexpected in what figures to be a college basketball season unlike any other, which begins Thursday afternoon for the Kansas men’s basketball program.

Self expects to have Marcus Garrett, Ochai Agbaji, Christian Braun and David McCormack in the starting lineup for Thursday’s matchup with No. 1 Gonzaga. That game is slated to begin at 12:30 p.m. Thursday in the Rocket Mortgage Fort Myers Tip-Off.

I've already explained the case for a newcomer to get the nod in this multi-series blog. Five-star Bryce Thompson was featured in the first edition, while junior college transfer Tyon Grant-Foster was highlighted in the most-recent blog.

Now, let’s combine two familiar names for the last version of this blog. Allow me to make the case for either Jalen Wilson or Tristan Enaruna to crack the starting rotation. 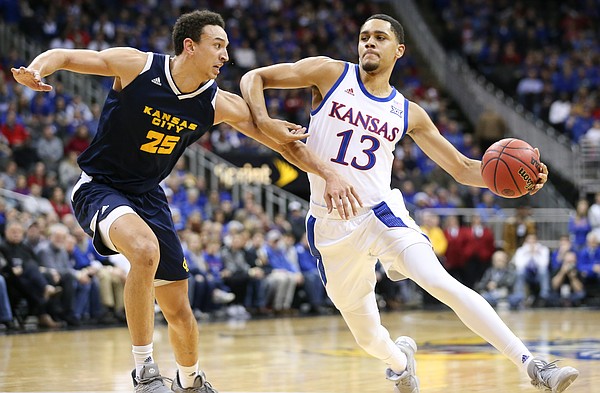 Let’s start with Wilson, who you could argue is essentially a newcomer. Wilson had his freshman season cut short after just two games due to a broken ankle, and was a redshirt for the remainder of the 2019-20 campaign.

Nobody knows how his freshman season would have turned out, especially since the Jayhawks had a strong roster and were considered the best team in college basketball by the postseason. But there is reason to believe that Wilson will play meaningful minutes this year, regardless if he ends up starting or not.

For one, the work Wilson put in the offseason speaks to his commitment to have a role on this year’s squad. The 6-foot-7 redshirt freshman forward recently admitted that he lost 14 pounds of fat, as Matt Tait wrote about recently. It was something Wilson chose to do himself without any instruction from the coaching staff.

The result is a leaner, quicker and more athletic version of Wilson. And he was already an impressive prospect before then.

Wilson was a four-star small forward and previous Michigan commit before he ultimately ended up in Lawrence. As a four-year starter at John H. Guyer High School in Denton, Texas, Wilson averaged 18.1 points, 7.5 rebounds and 3.0 assists per game during his senior season.

Wilson would bring a solid perimeter presence to an already stout starting lineup. Wilson has range that extends out to the 3-point line, meaning he’d provide a nice scoring threat to the rotation. He also could provide a strong, physical presence as a wing defender.

Bottom line: Wilson already had the skill set to position himself for a starting role. His work ethic in the offseason really just says a lot about his character and why he deserves a shot to be in the starting rotation.

Enaruna, meanwhile, is the wildcard of the bunch. There is reason to believe he might be fourth on this list entering the season, but could be the best starting option down the stretch. Benton Smith said as much during our most-recent podcast, and he knows his basketball.

The 6-foot-8 sophomore would be a versatile weapon in the starting lineup, as he can play both guard and forward. Enaruna has a 7-foot wingspan, and would add even more length to a defense that will probably make its money by getting in passing lanes this season.

Enaruna really just has a nice blend of size, length and athleticism. It is not hard to see why NBA scouts are especially fond of his potential, despite not having a major role last year for the Jayhawks.

As a freshman, Enaruna averaged 10.8 minutes per game in 30 games played. He led the team in blocked shots on four different occasions and paced the squad in steals twice. Enaruna also had nine outings with four-plus rebounds for KU.

To me, it all suggests that Enaruna could be a nice complimentary piece in this starting rotation. He could really bother opponents on the defensive end with his length, while also adding production through rebounds and steals.

There is also plenty of potential to make an even bigger impact when Enaruna puts it all together. It is why Enaruna might very well end up in the starting rotation, even if that is not as early as Thursday.

Like I said in the first edition of this blog, I don’t expect the race for the fifth starter to be over after the season opener. Don’t be surprised if all four of these players end up earning a start at some point this season.

Predictions & projections for the 2020-21 Kansas men's basketball season by KUsports.com

Enaruna always seemed a little timid to me last year. I don’t expect him to start but do hope we get a more aggressive version when he does see the court.

That’s 8 + Mitch and whoever backs up Marcus. Has Coach ever consistently played 10 through the season? Before NY, sure. Everyone gets some chance. It would be great to have 10 that were earning time.