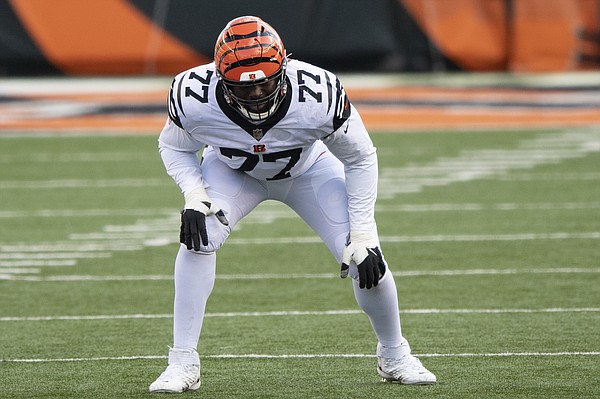 Despite making back-to-back starts for the Cincinnati Bengals, rookie offensive lineman Hakeem Adeniji won’t allow himself to think about what could be at stake over the final seven weeks of the 2020 campaign.

Adeniji, a former Kansas standout tackle, has made the most of his opportunity as of late while the Bengals have been dealing with injuries along the offensive line. Adeniji has played 100% of Cincinnati’s offensive snaps over the last two games, and could earn more playing time over the final stretch of the season.

During his media availability in a zoom call with local reporters on Thursday, Adeniji was asked if he viewed this sudden snap increase as a chance to audition for a bigger role in 2021. But the sixth-round selection wasn't interested in discussing what could happen next year.

“I haven’t even thought about 2021, hopefully we make it out of 2020,” Adeniji said in a video that was made available via All Bengals over at Sports Illustrated. “It’s been a crazy year.”

The Bengals are starting to get healthier along the offensive line, so there is no guarantee that Adeniji will even continue to see the field as much as he has. Left tackle Jonah Williams (neck stinger) had multiple days of being a full participant in practice in the week leading up to Sunday’s matchup with the Washington Football Team.

Per Pro Football Reference, Adeniji started and played all 65 snaps at left tackle in last week’s 36-10 loss to Pittsburgh. It came after he practiced at right tackle, according to the video call with reporters. Cincinnati left guard Quinton Spain started at right tackle last weekend after Williams did not play.

Even backup right tackle Fred Johnson came off the COVID list on Friday.

As a result, Bengals head coach Zac Taylor wouldn’t name a starter at right tackle for Week 11. But don’t expect there to be a rotation when he does decide who will be the team’s right tackle on Sunday at WFT.

"No, you really want to get a guy into a rhythm," Taylor told Bengals.com. "That's one of the positions where there's a feel for the game, a feel for a rusher. Communication with the guard next to you if you're a tackle or whatever the position is. Ideally you'd rather get a guy in there and roll with him."

Adenji, who is listed at 6-foot-4 and 302 pounds, has certainly been afforded the opportunity to get into a rhythm over the last two weeks.

During a 31-20 win over Tennessee in Week 8, Adeniji played all 73 of Cincinnati's offensive snaps. Prior to these last two outings, Adeniji had played a total of seven offensive snaps through the first seven games of the season.

Naturally, Adeniji believed he was more comfortable in his second start compared to his first.

“I think the biggest thing was the game slowing down for me,” Adeniji said. “I know my first game, everything was kind of flying. But this past game, I kind of settled down more and I was able to just get into a rhythm a lot more easily and communicate better.”

There have obviously been adjustments for Adeniji. For one, he has had to play and practice at multiple positions along the offensive line. Adeniji noted that he is no longer getting reps at guard, but he has been asked to get familiar with both tackle positions.

Adeniji, who made 48 starts for the Jayhawks at the collegiate level, admitted that his natural position is left tackle. So there has been an adjustment to playing on the right side without a preseason or much of camp due to an offseason that was impacted by the pandemic.

“Just kind of the biomechanics of you know how your body is,” Adeniji said of the difference between the two tackle positions. “The muscle memory, you get so used to kind of doing one thing and performing different functions with different hands. This leg or that leg might be more apt to doing this or that. That’s really the biggest thing.”

Either way, Adeniji is already off to a better start than most probably expected when he was selected with the 180th overall pick.

According to Pro Football Focus, Adeniji has an overall offensive grade of 52.9 so far this season. He has a pass-blocking mark of 55.5 and a run-blocking grade of 52.1. Both of those marks have him ranked firmly inside the top-five along the Bengals’ offensive line.

Protecting rookie quarterback Joe Burrow, the No. 1 overall pick in the 2020 NFL Draft, will be a top priority for the Bengals in the upcoming offseason. And Adeniji could factor into that long-term plan based on his recent play.

But Adeniji isn’t concerned with any of that. He plans to continue to make the most of this opportunity, no matter how long it lasts.

“This is what I’ve dreamed about doing my whole life,” Adeniji said. “The only pressure on me was just to be myself and not try to feel like I had to to be anyone else or do this or that. Just be myself and trust my game and trust my preparation.”