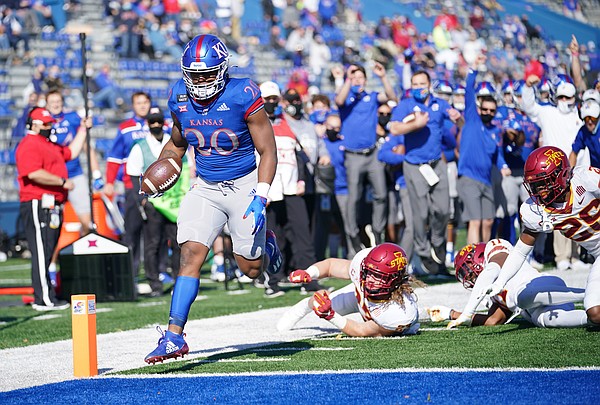 The Kansas football team is officially entering the home stretch of the 2020 campaign.

Following its final bye week of the season, Kansas is still seeking its first win of the year even though that might be easier said than done at this point. The Jayhawks (0-7, 0-6 Big 12) will likely be big underdogs in each of their final three games.

In fact, KU opened as a 29.5-point underdog against Texas (5-2, 4-2 Big 12) on FanDuel's Sportsbook. This week's matchup is slated to take place at 2:30 p.m. Saturday at David Booth Kansas Memorial Stadium.

As a result, the focus for the Jayhawks will continue to be about developing their young players who have flashed potential at times this fall.

Before those final three games, however, let’s take a moment to highlight a few standout Kansas players in all three phases — offense, defense and special teams — from the first seven contests.

All statistics for this blog are made possible by NCAA Premium Stats over at Pro Football Focus.

Let’s start with the offense, which hasn’t found much success in Year 2 of the Les Miles era. Freshman running back Daniel Hishaw Jr. has been one of the few bright spots on that side of the ball, especially of late when he's been asked to embrace a bigger role.

Hishaw has a PFF offensive grade of 69.8, which is the fourth-best overall mark on the team. Of players who have had at least 40 snaps on the year, Hishaw actually is second on the squad and only trails an offensive grade of 72.9 recorded by running back Pooka Williams Jr.

Williams’ decision to opt out for the remainder of the season opened the door for Hishaw over the last few games. Hishaw had a season-high 10 carries last time out against Oklahoma. Hishaw also played 55 snaps against OU, which was 31 snaps more than his previous best mark of the year.

Prior to this recent three-game stretch, Hishaw hadn’t carried the ball more than five times in a game and he didn’t play more than 10 snaps in a contest. For the season, Hishaw has 30 rushing attempts for 142 yards and one touchdown on the year.

Nearly one-third of Hishaw’s carries have come in the direction of the right end, according to PFF’s rushing direction metric. He has nine such carries for 70 yards and one touchdown, while recording three first downs in the process.

It will be interesting to see if Hishaw can keep up this level of efficiency as his role continues to increase over the final three weeks.

KU’s defense has performed better than its offense, which is mostly due to major contributions from several young players. That said, senior linebacker Kyron Johnson’s play deserves some recognition here.

Johnson’s overall defensive grade is 65.7, which trails five other Kansas defensive players. But Johnson has been especially impressive in the pass-rushing department, and has firmly led the way in that area this season.

Of players with at least 25 pass-rushing snaps, Johnson has the best PFF pass-rushing grade of 75.1. He has been used as a pass rusher on 115 of his 414 total snaps this season. For comparison, Johnson has also been utilized in coverage on 95 snaps.

Through seven games, Johnson has a total of 11 pressures to lead the Jayhawks in that category. He has registered five quarterback hurries, three hits on the signal caller and officially been credited with three sacks.

Johnson tallied two of those sacks in the loss to OU, becoming the first Jayhawk to record multiple sacks in a single game in over two years. It will be up to Johnson to continue that momentum over the final three contests.

It feels like the only time the special teams unit has really been mentioned is when it had poor showing in punt coverage against Kansas State. So let's change that.

Junior Gayflor Flomo, who is in his first year with the program after transferring from Iowa Western Community College, is having a solid season as a member of KU’s special teams unit.

According to PFF, Flomo has the best special teams grade on the team with an overall mark of 76.6. Flomo has played a total of 122 snaps on special teams, which trails only Hunter Kaufman’s mark of 140 snaps.

Flomo has played 59 snaps on kick return, 43 snaps on punt coverage and 20 on kick coverage so far this year. Flomo has been credited with five tackles on special teams this year, besting the next-closest individual mark by a total of two stops.

It really is an important part of the game, and Flomo has made the most of his opportunities thus far for KU.

I'm curious how Daniels would have ranked had he had an effective OL.

If we didn't have a sieve for an OL, every key position player would have better stats.