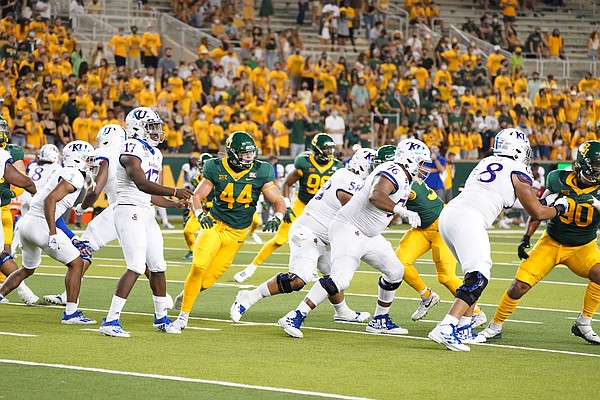 It can be rather difficult to find statistics to determine how good or bad an offensive line is playing.

A lot of people point to sacks as a good indicator of offensive line play, but there is a serious argument that sacks are often more of a quarterback stat. At the very least, one would have to go back and watch all sacks to determine who was at fault on any given play.

Fortunately for the purpose of this blog, Pro Football Focus does exactly that, and that particular information is available for those subscribed to NCAA Premium Stats.

PFF’s team keeps track of all the different kinds of pressures — hurries, hits, sacks — with proper credit (or blame) to a specific player on any given play. They also make note of any penalties.

The Kansas offensive line has been a major storyline following last week’s loss to Oklahoma, in which true freshman quarterback Jalon Daniels was sacked nine times.

But that unit has really struggled all season, which has led to an 0-7 start by the Jayhawks during Year 2 of the Les Miles era.

Since it is a bye week, and there are only three games left to play for KU, now is as good of a time as any to do a statistical breakdown of the offensive line.

Using PFF numbers, let’s take a closer look at each major contributor along the offensive line. I will also provide my own analysis from what I’ve noticed while watching tape on each player to help better illustrate what is going on with every lineman.

Analysis: An offensive line is only as strong as its weakest link, and it is no secret that Kansas is most-vulnerable at the left tackle position. Clark, who switched from guard this year, is still making the same mistakes at this point in the season. Clark lacks lateral quickness to set the edge on faster defenders, and his improper hand usage makes him susceptible to spin moves.

Analysis: Lott has solid speed for the position, which is why he is often the one asked to pull. If you watch closely, though, Lott tends to give away when he is going to pull based on how he lines up. I’ve posted a photo below to help illustrate this tendency.

Most of Lott’s issues in pass protection are due to his marginal function strength. This can often lead to him getting bull-rushed by a 2-tech defensive lineman. 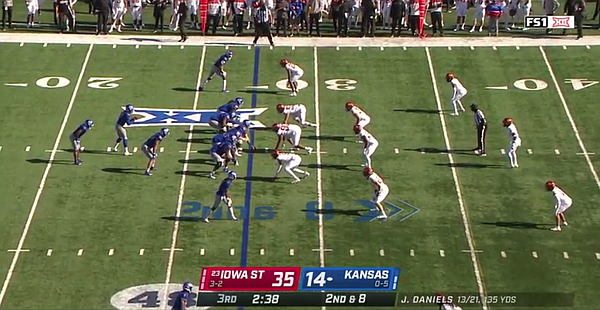 A look at Jacobi Lott about to pull vs. Iowa State during the 2020 season. by Shane Jackson

Analysis: A center doesn’t have too many one-on-one battles in pass protection, but Mane could certainly be more aggressive in pass pro. He has shown solid mental processing to adjust to twists/stunts, which is important for a center, but there are too many snaps where I feel like he could provide more help to a nearby guard while waiting to see if there is a blitz coming.

Analysis: Hughes is your typical force at guard in the run game, but he has his own issues in true passing-down situations. Hughes could improve in this area by being more consistent with his initial hand punch and placement, which could allow him to lock out and control more battles with a 3-tech defender. Still, in a year where offensive line has been a glaring issue, there is no reason to make a change at the right guard position.

Analysis: Like his right guard, Bostick has had a lot of success in the run game this year. But this is a blog about pass protection. Bostick has similar issues with his hand placement, because it seems like he could be much quicker with his initial punch. Bostick has a tendency to let defenders get too close before initiating the battle, which can lead to being late to set the edge on his island.

The performance against Oklahoma was by far Bostick’s worst outing, as he allowed six pressures in that game alone. PFF charged Bostick with four quarterback hurries and two sacks in the loss to OU, which should be concerning since he wasn't that bad entering this past weekend.

Analysis: Lopeti has had to play multiple positions this year, which includes having to learn right tackle on the fly at one point. While it takes some level of versatility to do that, it also probably hinders some of his development at the same time. Most of Lopeti’s issues are due his initial footwork, as he doesn’t always get to his set points in time in pass protection.

One play against West Virginia really highlighted this when he was playing right tackle. He stepped right at the snap, and he was late to the defensive end who came crashing down to Lopeti’s left and ended up making the sack. Again, that feels like the simple stuff that could be fixed by just getting more reps at one position.