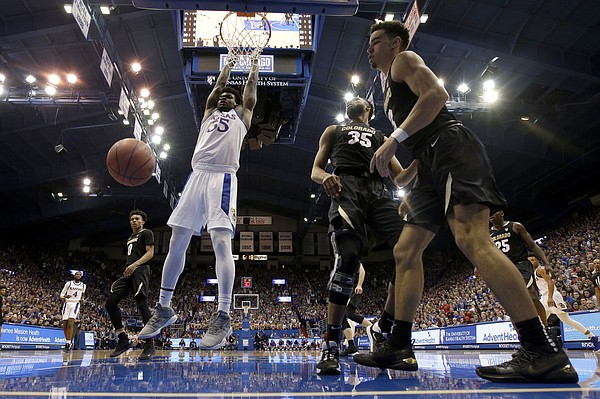 The Kansas bench started to stand up before David McCormack even caught the ball.

With just over three minutes left in the game, junior Marcus Garrett set up the sophomore big man with an alley-oop off a designed set during KU’s eventual 60-53 win over West Virginia on Saturday. Garrett drove hard to his right before lobbing a pass from the free-throw line.

McCormack cut to the left side of the lane and caught the pass right near the rim. He flushed it with his right hand in one smooth motion while KU’s bench roared in approval. It was the lone dunk of the day that wasn't recorded by Udoka Azubuike, who tallied the previous four against the Mountaineers.

And that above-the-rim mentality helped No. 3 Kansas (11-2, 1-0 Big 12) rally from a 10-point deficit, as it recorded four alley-oops in the second half to win its 29th consecutive conference opener.

Kansas finished with five dunks compared to one by West Virginia, which made a noticeable difference throughout the afternoon in Allen Fieldhouse and was a key part of the team’s game plan.

“We felt like their bigs kept coming up a lot, but they were coming up and dropping,” Garrett said. “I knew that I was just trying to get the ball as soon as they stepped up.”

KU's 5 dunks in win over West Virginia by KUsports.com

But that has really been the theme of KU’s offense during the early part of its season, even if it has yet to reach its full potential on that end.

After a year that desperately lacked those momentum-shifting slams, the Jayhawks are once again playing above the rim this year. In fact, Kansas has recorded 62 dunks as a team through 13 games after notching a total of 83 a year ago.

To put in another way, 14.5% of KU’s 2-pointers have come via dunks per BartTorvik.com. Only Dayton (16.4) and SMU (15.4) have a higher dunks share than the Jayhawks. For comparison, Kansas ranked 115th in that category last year by recording a dunk on 6.4% of its 2-point baskets.

This dunking dominance should come as no surprise, considering how well the Jayhawks have been in that area in the last decade. Torvik’s numbers go back to the 2009-10 season, and Kansas has ranked inside the top 10 in dunks share in six of the previous 10 seasons. 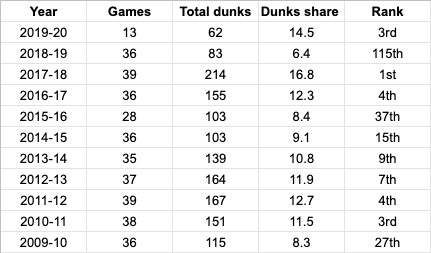 A look at KU's dunking numbers via BartTorvik.com.

In terms of dunks share, KU is having its second-best season since Torvik started tracking such numbers. The Jayhawks led the nation just two seasons ago by dunking on 16.8% of their 2-point baskets on their way to a Final Four appearance. KU also tallied 47 more dunks that year than the next-best season, which was 167 in 2011-12.

It is not hard to recognize the reasoning for a recent pattern, however. Azubuike’s presence, and more importantly his 7-foot frame, has made a large impact on KU’s dunking numbers as of late.

Azubuike appeared in 36 of the team’s 39 games during that 2017-18 season. He paced the Jayhawks with 122 dunks en route to leading all of NCAA Division I in field goal percentage (77.0) as a sophomore. No other Kansas player finished with more than 22 dunks that season.

Last season, Azubuike played in just nine games before suffering a season-ending injury the day before Kansas squared off with Iowa State in Hilton Coliseum. Azubuike still registered a team-high 33 dunks last year, while Ochai Agbaji finished in second with 15 dunks in 22 games after KU pulled his redshirt.

Azubuike already has 40 dunks this season and has been a key reason why KU is among the nation’s best at playing above the rim. Six different players have been credited with a slam, including nine from McCormack. Agbaji has seven dunks on 10 attempts, while Christian Braun, Silvio De Sousa and Tristan Enaruna all have two.

More importantly, a number of players have been responsible for getting KU’s dunkers in the right spot. Garrett netted the assist on two alley-oops in the second half — one to McCormack and one to Azubuike — against West Virginia. He also logged the assist on Azubuike’s dunk in the first half.

Agbaji and sophomore Devon Dotson were responsible for the other two alley-oops, both of which ended with viscous slams by Azubuike. Dotson’s assist, in particular, was significant to Self afterward and perhaps gives KU even more options moving forward to get more dunks.

“Marcus is usually the passer on the lobs more than Dot,” Self said. “But Dot did a good job on that one, and Dok went and got it.”

The big man agreed and noted that it could be a sign of things to come.

"I was surprised when (Dotson) did that because I haven't had a lob from him in a minute," Azubuike said. "I would say the chemistry is still coming along."

It shows the increased opportunities for Marcus to set an example. The others are just young and inexperienced enough to not have that as a significant tool in their belts. Another reason it’s great to have Marcus provide the combo-guard/forward presence.