Getting to know: Tennessee basketball 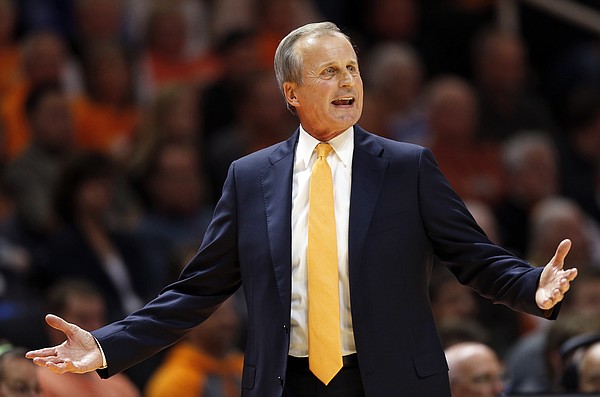 No. 3 Kansas will return to the court for the first time since being involved with an all-out brawl following its 81-60 win over Kansas State on Tuesday.

As part of the Big 12/SEC Challenge, the Jayhawks will welcome Tennessee to town Saturday afternoon. The game will be the site of ESPN College GameDay. It marks the 18th time KU has been a part of a College GameDay during the regular season. KU is 11-6 all-time when it is one of the two teams featured on GameDay.

This season, the Volunteers enter the matchup with an overall record of 12-6 after winning back-to-back games. Tennessee is the No. 50 team in the nation on KenPom, a site that also gives KU a 91% chance of victory. Kansas (15-3) is projected to win by a 69-54 margin.

At 6-foot-6, Pons is the SEC’s leading shot blocker and has blocked at least one shot in every game this season.

In fact, his streak of 18 consecutive games with at least one block is the longest such stretch by a UT player since C.J. Black put together an 18-game streak in 1998. Pons has blocked three or more shots in 10 different games this season, which includes a program-record six blocks against Jacksonville State on Dec. 21.

Pons is expected to make it to the next level as well. In the ESPN 2021 NBA Mock Draft, which was released on Jan. 22, Pons was projected as the 52nd overall pick to the Philadelphia 76ers.

None by Austin Brown

Leading the team in scoring this season is Bowden.

Bowden is averaging 12.3 points per game for the Volunteers. He is also averaging 3.9 rebounds and 2.5 assists per contest. Bowden has the seventh-most career rebounds among all active players in the SEC with 408 boards in his career.

Bowden has also been excellent at taking care of the rock, posting a turnover rate of just 12.2% through 18 games. UT rarely has a lineup without Bowden in the mix. He plays 83.6% of the team’s minutes.

Fulkerson has provided consistent production in the frontcourt this season, but he’s picked it up as of late.

Plays ending with a field goal attempt by Fulkerson have been efficient. Fulkerson is averaging a team-best 1.7 points per shot this season.

“It was a great team win. We needed everybody.”

None by Tennessee Basketball

ONE THING TENNESSEE IS GOOD AT

Due to its frontcourt play, Tennessee has been excellent at limiting teams on 2-point shots. Opposing teams are shooting 41.2% from the floor on 2-point attempts, which is the fourth-best defensive clip in the country.

ONE THING TENNESSEE IS BAD AT

The Volunteers have struggled at taking care of the rock, a trait that won’t be too favorable in this matchup. UT is posting a turnover rate of 20.8%, which ranks 268th in all of college basketball on KenPom.

Kansas is a 13.5-point favorite, which is a pretty big number given that the hosts will only have a seven-player rotation. But the Jayhawks have their key players still, and they will be forced to use more of a four-guard lineup now. UT’s turnovers issues will also be a major key in Allen Fieldhouse, giving Kansas an opportunity to score in transition and break this game completely open.