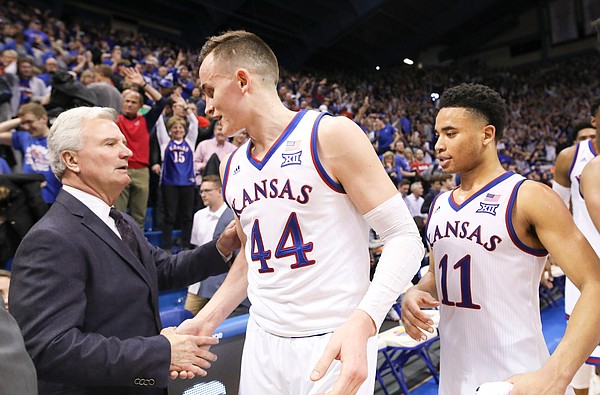 After picking up two Big 12 wins away from home last week, No. 3 Kansas returns to Lawrence to take on Kansas State for the first installment of the Sunflower Showdown.

Kansas State (8-9, 1-4 Big 12) is coming off an 84-68 victory over West Virginia this past weekend to earn its first league win of the season. The 84-point effort was surprising, considering KSU is averaging just 65.6 points per game this season.

Kansas leads the overall series with Kansas State, 197-94, including 90-35 record in games played in Lawrence (49-18 in Allen Fieldhouse). KU has won the last 13 meetings with KSU in Lawrence starting in 2007.

Tipoff is slated for 6 p.m.

Sneed has led the Wildcats in scoring in eight of the last 16 games, averaging 15.0 points per contest on 41% shooting. For the season, Sneed is averaging 14.6 points on 40.3% shooting.

Sneed is one of nine players to rank in the top 25 in both scoring and rebounding in the Big 12, as he ranks ninth in scoring and 22nd in rebounding with an average of 4.8 rebounds per outing. Sneed is coming off a 16-point performance against West Virginia.

In addition, Sneed continues to move up several career charts during his final season with K-State. Sneed is in the top 20 in scoring (15th), 3-point field goals made (fifth) and attempted (fourth), steals (fourth) and minutes (10th).

Xavier Sneed has played against Kansas a time or two in his career. Scouting report defense: pic.twitter.com/hZQX6exSb3

Another familiar face for Kansas State is at point guard.

None by Kyle Boone

After the duo of Sneed and Diarra, Mawien is third on the team in scoring with an average of 6.9 points per game. He’s also averaging 4.5 rebounds per contest during his final season with KSU.

The senior big man has started all 88 games in his career for the Wildcats. Mawien has scored in double figures in 27 career games, including a career-high 29 points against Kansas in the 2018 Big 12 Championship on March 9.

As of late, though, Mawien has been limited with foul trouble. Over the last three games, Mawien has averaged 8.7 minutes per game (26 total) due to 11 fouls. He fouled out against West Virginia this past weekend.

Speaking of Makol Mawien, this is the type of pass K-State players should be sending his way in the paint. No more bounce passes or back-door cuts. His effectiveness plunges when he’s not set. pic.twitter.com/IQuRbj2D54

None by Kellis Robinett

ONE THING KANSAS STATE IS GOOD AT

Despite no longer having Barry Brown, Kansas State is still very good at forcing turnovers. The Wildcats rank ninth in the country with a turnover rate of 24.9%, according to KenPom.

ONE THING KANSAS STATE IS BAD AT

Udoka Azubuike could have another big game on the defensive end. K-State’s offense has posted a 10.3% block rate this season, a number that ranks 283rd in the country.

Kansas is a 15-point favorite over Kansas State as of Tuesday morning. Given KU’s turnover issues, that big of a number might scare some people away. But K-State’s offense has struggled for much of the season, and that won’t change against this Kansas defense. I’m laying the big number.