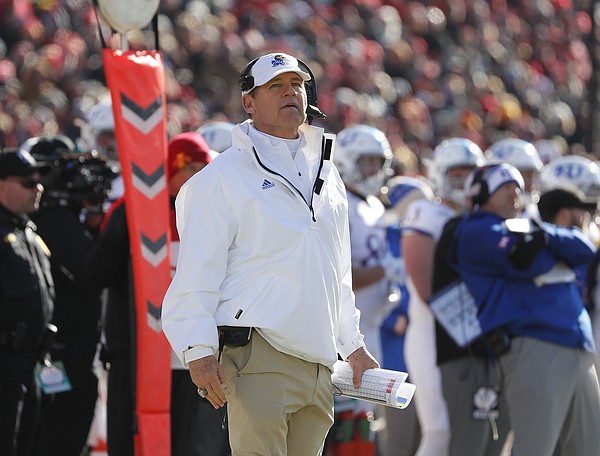 Kansas head coach Les Miles watches from the sidelines during the first half of an NCAA college football game against Iowa State, Saturday, Nov. 23, 2019, in Ames, Iowa. (AP Photo/Matthew Putney) by Associated Press

In a lot of ways, this was Les Miles’ first true recruiting class since becoming the head coach at Kansas.

Sure, the history books will say that 2019 was his first class, a group that ultimately ranked No. 70 overall in team rankings on Rivals. But that class was put together on the fly, with Miles taking over after the 2018 season and finalizing the 19-player group by Feb. 6, 2019.

This time around, Miles had more than two months to land all 30 of his 2020 signees. And he revealed a blueprint for what he’s trying to do in the process. All 30 of KU’s pledges in this class are high school seniors, including four preferred walk-ons.

“This is what I want to do, period,” Miles said on his "Hawk Talk" radio show Thursday evening. “It’s where we want to stay.”

Now, of course, that type of bold proclamation is easy to say after the fact. We know that the Jayhawks would have liked to land former Florida quarterback Feleipe Franks, who ultimately chose to transfer to Arkansas.

But understanding the historical significance of this class is eye-opening. Rivals’ recruiting rankings go all the way back to the 2000 season. This is the first time KU hasn’t had at least one junior college player or transfer in its class.

Texas is the only other Big 12 program to not have a junior college player in this year’s class. Kansas State, meanwhile, leads the way with six such players. KU’s 2020 class is also ranked No. 47 overall on Rivals, which is the team’s highest overall ranking since it had the 43rd-best class in 2013.

While Miles’ approach is refreshing, it certainly doesn’t bode well for KU’s success in the near future. And, for a fan base of a program that hasn’t won more than three games in a season since 2009, that might be a tough pill to swallow.

Looking at KU’s 2019 class alone, it is obvious that the team’s best contributor last fall was a junior college prospect. Receiver Andrew Parchment, who started at Northern Illinois and came to KU after one year at Iowa Central Community College, paced the team with 831 receiving yards and 65 receptions.

The other two junior college players, quarterback Thomas MacVittie and receiver Ezra Naylor II, were not as productive in their debut season with the Jayhawks. But Parchment’s play made a bigger impact than even the most lauded freshman prospects.

Steven Parker, who was a four-star prospect out of Dallas, played in four games and made one solo tackle in his rookie campaign. Linebacker Gavin Potter was forced into action after a season-ending injury to Dru Prox and finished with 56 total tackles in a year that featured plenty of learning moments for the freshman.

But just like it is still too early to determine the fate of the 2019 class, it will take some time to see the impact of the 2020 prospects. Still, developing those particular players will be the key to eventually turning this thing around.

“With those players that are playing three years and four years, it makes a tremendous difference how they finish their technique,” Miles said. “They will be a much better athlete and more competent competitor.”

It just might mean that the on-field product could get worse before it gets better at David Booth Kansas Memorial Stadium.

This is the beauty of hiring Miles. He’s confident in himself and in his position. No panic at all.

With such a big class, I think we’ll see some impact freshmen this year.

The stars would indicate otherwise about impact freshman, but maybe.

Definitely not RB, right? Seems like there's already plenty of options in front at WR, QB & LB too. There's opportunities on OL & DL but there doesn't seem to be a ready-made option where strength development is so important.

I agree Brett, and I also think that it was inevitable given the players left by Beatty, and the holes left in the roster that Miles first year might be better than his second. However, I still believe that we will compete (maybe not win) in more games this next year.

The other thing to watch for is how do the redshirts and other freshmen and sophomores from last year progress in year 2. We all know that Beatty simply did not develop players. It is hard to name someone who played for him for 4 years who truly progressed. Not to mention his failure to use the players he did have, such as Stanley.

As a program we are already better in the sense of having a plan, and building a foundation. Something that never seemed to matter..

We don't all know that Beatty didn't develop players because at least the ones that were paying attention without preconceived notions saw that he did a pretty substantial job of developing players. As Brett has commented extensively, the players that came to KU were not highly recruited/rated, and he certainly didn't inherit anyone. By the last couple years though, there were a half dozen or so players receiving post-season awards and a number went on to play with NFL teams. I think if you ask a football player, that will be considered the ultimate sign of development.

If you paid attention last year, you also would have read Carter's comment that the difference between '19 and previous years was his own decision to not take as many chances resulting in more mistakes. Instead, he started making the easy passes and taking what the D was giving. Hitting singles for average vs. swinging for the fence and striking out too much along the way.

It is good though that Les has enough name recognition that he is getting into home that were previously off limits.

Dirk, Hate to inform you but we have had no such Coach as Beatty. There is a Warren Beatty who played Clyde in a famous movie. And I wonder why and how Carter came to the understanding it required for him to have more success. Strange he decided that with this staff when he could not figure it out for the 4 years prior.

HC Miles and staff have recruited exactly the way the majority of the fan base (that post on this site) have been asking for. And, if one was to look at what Matt Rhule did at Baylor (in his short tenure), Rhule started a lot of Freshman players in his 1st year at Baylor. And, what was the result of that 1st year recruiting class of Matt Rhule by the end of their 3rd year? They were competing for the Big XII Championship Game. Granted, it helped that Rhule was coaching a University in the State of Texas (vs. Kansas). But, Coach Miles didn't make it to LSU due to not knowing how to build a program. I am concerned about the QB position. But, I'm already looking forward to how the 2020 Jayhawks Football team performs.

Do graduate transfers count against the 25 scholarship limit?

Dirk you just gave Beaty credit for a season in which he wasn’t the coach. Carter’s relative success last year says all you need to know about Beaty’s ineptitude. If you don’t understand the most important position on the field then you are a bad coach.

Beaty’s superior player development skills shone well with his career on the line, at home, against a good-not-great FCS team.

Continuing to give a guy credit for barely filling some of the most minimum requirements of his job while ignoring his destruction of the program is one of the most curious pursuits I’ve ever witnessed. Beaty was so confident in his ability to develop players, he recruited 35 JUCO kids. Even he knew he didn’t have the chops to get it done so he fell back to shortcuts.

And in terms of impact players, it’s the math. With 26 coming in, joining a team with gaps, there will be kids that get significant playing time this year. And two or three will play important roles. It’s how football works.