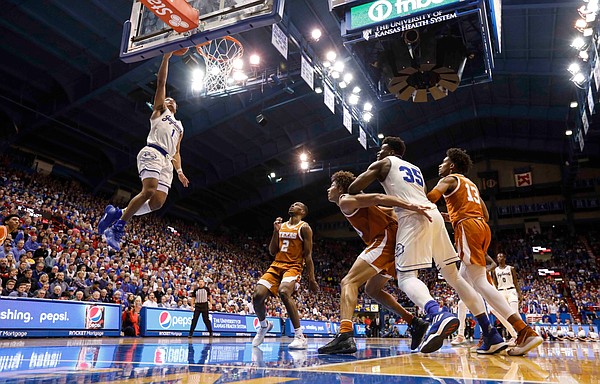 Kansas guard Devon Dotson (1) gets in for a wide-open layup during the second half on Monday, Feb. 3, 2020 at Allen Fieldhouse. by Nick Krug

This upcoming two-game stretch is like the fifth inning of a baseball game.

No. 3 Kansas is preparing for back-to-back road tilts against TCU and West Virginia during a five-day stretch. In the grand scheme of the Big 12 Conference race, especially with a trip to No. 1 Baylor looming, it might not seem like a significant stretch for the Jayhawks.

But even though there are certainly bigger games down the road this season, Kansas coach Bill Self believes these two contests could have a huge impact on KU’s chances of reclaiming the Big 12 throne.

“Usually the ninth inning is magnified more than the fifth inning in baseball, and it’s kind of the same as the league race as well,” Self told reporters Thursday during his weekly press conference. “The next two games (are) pivotal in where we will end up in the league race.”

The Jayhawks (19-3, 8-1 Big 12), who sit alone in second place in the conference standings, have had more success on the road so far this year. They have won all four of their conference road games, and have posted a 5-1 clip away from home on the year.

Kansas went 3-8 in road contests last year, for comparison, including a 2-6 clip in Big 12 play. KU even needed overtime to knock off TCU in Fort Worth to record one of its two league victories on the road.

According to KenPom, the Jayhawks have an 81% chance of victory in Saturday’s meeting with the Horned Frogs (13-9, 4-5 Big 12) at Ed and Rae Schollmaier Arena. KU is projected to win by a 69-59 margin on KenPom, while Torvik predicts the visitors to earn a 68-59 victory.

“Every road game, it is not easy,” sophomore point guard Devon Dotson said. “We are going to have to stay together, stay locked in and make sure we get the job done.”

Even if the Jayhawks are victorious this weekend, an even tougher test awaits them just four days later. Kansas will travel to Morgantown to take on West Virginia (18-4, 6-3 Big 12) in a rematch at 6 p.m. Wednesday. KU secured a 60-53 win over WVU in the first meeting during the Big 12 opener.

The Jayhawks have typically struggled at West Virginia, posting a 2-5 all-time record in the WVU Coliseum. The computers suggest that Kansas could suffer a familiar fate this time around. KenPom gives KU a 49% chance of victory, while Torvik currently has the team’s chances at 48%.

“It’s as important week as we have had to set up really, really major games later,” Self said. “In order to put yourself in the best position, we need to play our best right now.”

Yet most of that urgency comes from the team atop the Big 12 standings.

The Bears have yet to face West Virginia, but they have at least one win against every other Big 12 team. Baylor has also defeated Iowa State twice, and secured a 67-55 win over Kansas on Jan. 11.

As of right now, both Kansas and Baylor are projected to win a share of the Big 12 title on KenPom with a 15-3 record in conference play.

That is what makes this stretch so crucial for the Jayhawks. Baylor will host Oklahoma State on Saturday and travel to Texas on Monday. A misstep by the frontrunners seems unlikely, meaning Kansas could be in an even bigger hole if it were to lose one of its next two road games.

“You just don’t want to create more separation because I can’t see them losing,” Self said. “(On Feb. 6), I don’t think we have seen a team in our league, since I have been here, as good as the Baylor Bears.”

Bill Self speaks to media ahead of matchup with TCU by KUsports.com

Isaiah Moss on how he can improve his consistency as a shooter by KUsports.com

Devon Dotson on how Kansas can improve from 3-point range by KUsports.com