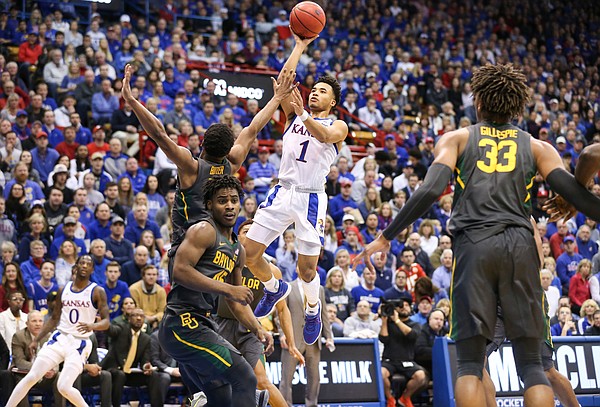 It will be a heavyweight fight that you don’t have to buy on Pay-Per-View.

Two of the best college basketball teams in the country will square off on Saturday, and there is plenty on the line. No. 1 Baylor (24-1, 13-0 Big 12) hasn’t lost since Nov. 8, and can essentially lock up the Big 12 race with a win this weekend.

No. 3 Kansas (23-3, 12-1 Big 12) can avenge its lone loss of the conference season, and put itself in good position of clinching at least a share of the league title. Oh, and the winner could have the inside track on the No. 1 overall seed in the NCAA Tournament.

To say this is a big game would be an understatement, especially with ESPN’s College Gameday in Waco, Texas. The Bears won the first meeting with the Jayhawks, earning a 67-55 victory in Allen Fieldhouse on Jan. 11. But sophomore point guard Devon Dotson was banged up and senior center Udoka Azubuike was limited on offense.

KenPom indicates this will be a slugfest between two elite basketball squads. KenPom gives KU a 46% chance of victory, projecting a 64-63 win for Baylor. 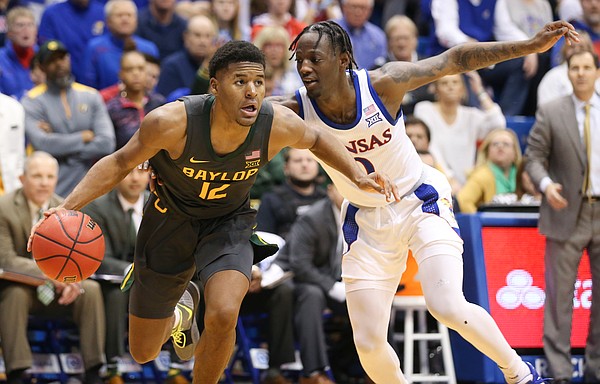 Baylor guard Jared Butler (12) gets around Kansas guard Marcus Garrett (0) as he heads to the bucket during the second half on Saturday, Jan. 11, 2020 at Allen Fieldhouse. by Nick Krug

While Baylor has a balanced attack, Butler has often led the way this season.

Butler has paced the Bears in scoring 14 of 25 games this season after doing so in six of 34 games last year. Butler has seven games with 20-plus points this season, while scoring an average of 15.6 points per game in his sophomore campaign. 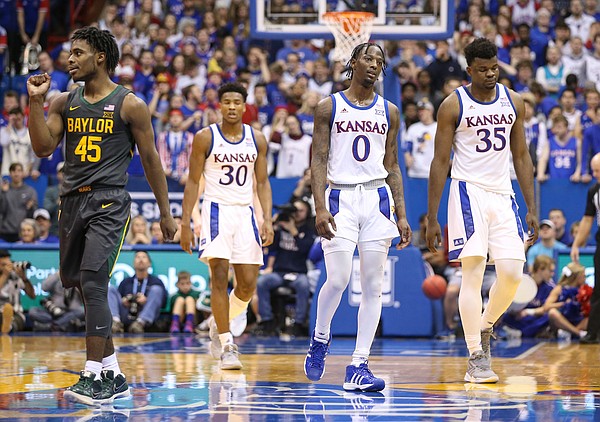 Deflated Kansas players Marcus Garrett (0), Udoka Azubuike (35) and Ochai Agbaji (30) make their way to the bench during a timeout in the second half as Baylor guard Davion Mitchell (45) pumps his fist on Saturday, Jan. 11, 2020 at Allen Fieldhouse. by Nick Krug

Mitchell has started all 25 games this season after coming off the bench in all 34 games during his freshman season at Auburn (2017-18).

In fact, Mitchell needed only 14 games to pass his freshman season scoring total (126) at Auburn. Mitchell has scored in double figures in 11 of the last 16 games after doing so in four of his first 43 collegiate games.

Teague’s status remains uncertain, but he will likely have a big impact on this game if he’s ready to go.

Prior to missing the last two games with a wrist injury, Teague played in 90 consecutive games and made 86 consecutive starts. Teague has scored 11 or more points and played 35 or more minutes in each of his last seven outings. He actually led the Bears in scoring in six of those contests.

ONE THING BU IS GOOD AT

The Bears typically control the offensive glass, and it leads to extra chances of putting the ball through the net. Baylor ranks fifth in the country with an offensive rebound rate of 36.5% this season.

ONE THING BU IS BAD AT

Avoiding monster swats by Udoka Azubuike will be easier said than done for the Bears. The talented big man had seven blocks in the first meeting, and Baylor has struggled with that all year. Opposing teams have a block rate of 13.1% against BU, which ranks 351st in the nation.

Baylor is a two-point favorite, though this pick comes down to who you think is going to win.

I’ve thought the Jayhawks were going to get the better end of the rematch for a long time, but especially with how well they have played over the last couple games on offense. It is just hard to pick any team beating Bill Self both times. I’m guessing KU will find a way to win this game, even if it is ugly.