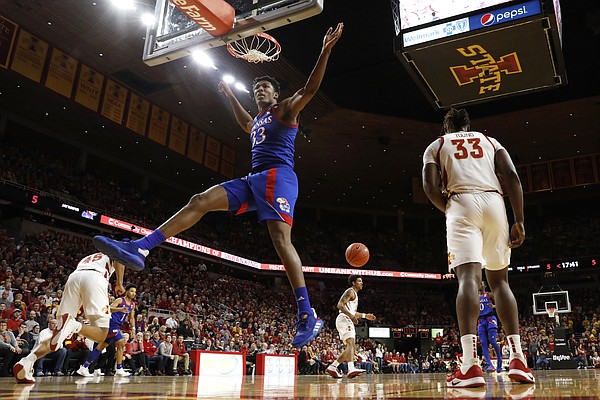 By definition, this could be considered a trap game for the Kansas men’s basketball team.

No. 3 Kansas (22-3, 11-1 Big) is six days away from a rematch with undefeated Baylor, a matchup that will certainly have Big 12 title implications. The only thing standing in the Jayhawks’ way of preparing for that heavyweight battle is Iowa State.

The Cyclones come to town tonight for a Big Monday tilt that might not have as much buzz as previous years. Iowa State (11-14, 4-8 Big 12) has lost five of its previous seven games, and potential NBA Lottery Pick Tyrese Haliburton is out for the rest of the season.

Even with Haliburton in the lineup, Kansas shredded ISU for a 79-53 victory in Hilton Coliseum on Jan. 8. The rematch in Allen Fieldhouse figures to be much of the same in terms of final score, too. 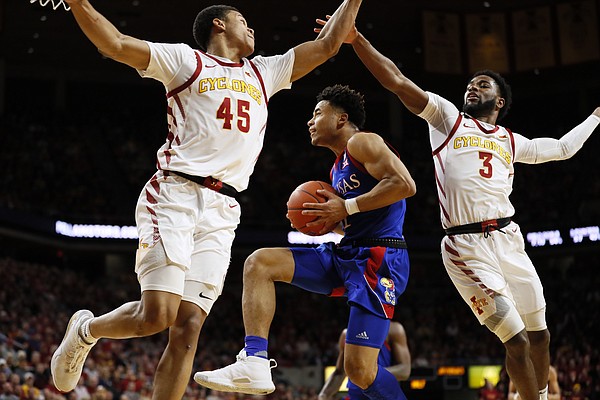 With Haliburton on the shelf, Bolton is the team’s go-to option on the offensive end.

Bolton is averaging 14.7 points per game, which ranks eighth in the Big 12. His 63 assists are second on the team and he has made a team-high 93 free throws this season. Bolton has also connected on 38 attempts from beyond the arc.

The transfer from Penn State has reached double figures in 18 of 25 Cyclones appearances, including seven of his previous eight games.

Last time out, Jacobson had a huge game in Iowa State’s lopsided win against Texas.

Jacobson recorded 21 points and 13 rebounds in what was an 81-52 home victory over Texas on Saturday. Jacobson started all 35 games a year ago, one of two Cyclones to do so. He also needs just 88 points to reach 1,000 in his career.

This season, Jacobson is averaging 7.1 points and 5.6 rebounds per game for the Cyclones.

Earlier this month, Young returned to the starting lineup against West Virginia and has been playing well as of late.

Young is averaging 12.7 points per game over the last eight contests. During that stretch, Young is shooting 50.8% from the field and has reached double figures in six of the last eight outings. Against Texas, Young posted 17 points on a 4-for-5 effort from the floor.

For the season, Young is averaging 9.4 points and 3.8 rebounds per game.

The Cyclones are coached by Steve Prohm, who is 94-67 in his fifth season at ISU and 198-96 in his ninth season overall.

ONE THING ISU IS GOOD AT

The Cyclones have been active in the passing lanes, posting a defensive turnover rate of 21.1% this season. According to KenPom, only 64 teams in all of college basketball have posted a better clip.

ONE THING ISU IS BAD AT

Iowa State’s not a team built to have success on the glass, particularly on the defensive end. Opposing teams have recorded an offensive rebound rate of 31.6% against ISU, which is a number that ranks 316th in the nation.

Kansas is a 16-point favorite as of Monday morning on FanDuel’s Sportsbook.

The trap-game narrative is a real thing, even though Kansas is certainly going to win tonight. This will be KU’s second game in three days and the team surely wants to just get through this stretch to get some much-needed rest before a big game.

It’s tempting to take the points, but Iowa State isn’t particularly good and that will be on full display tonight.