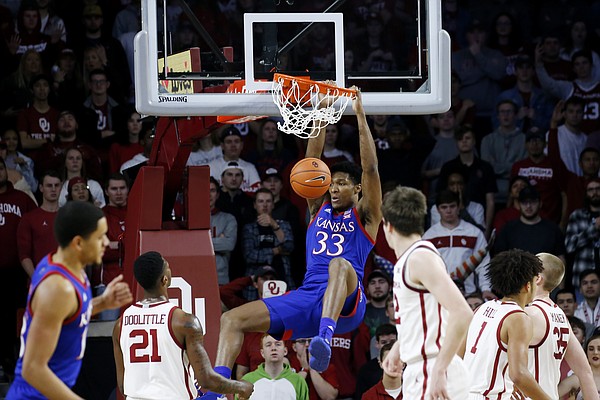 After getting through a two-game road stretch unscathed, the Kansas men’s basketball team is set to return to Allen Fieldhouse for two games in three days.

The Jayhawks, who are ranked No. 3 in the nation, will square off with Oklahoma on Saturday before welcoming Iowa State to town on Monday. Even without starting point guard Devon Dotson, Kansas (21-3, 10-1 Big 12) claimed the first meeting against OU with a 66-52 victory on Jan. 14.

Kansas, meanwhile, has won nine games in a row since falling to Baylor at home. With a win on Saturday, KU can post a win streak of 10 games or longer for the 17th time in the Bill Self era. According to KenPom, Kansas has a 90% chance of victory with a projected 74-60 win.

The Jayhawks lead the overall series with the Sooners, 149-68, including a 49-7 clip in Allen Fieldhouse. 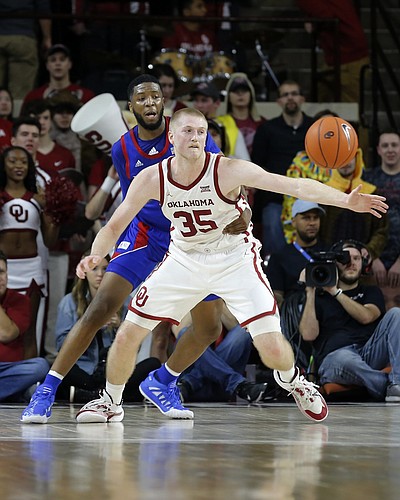 Oklahoma's Brady Manek (35) and Kansas' Isaiah Moss (4) watch the ball during the first half of an NCAA college basketball game in Norman, Okla., Tuesday, Jan. 14, 2020. by Associated Press

During Big 12 play, Manek has been one of the top 3-point shooters.

For the season, Manek is tied with TCU’s Desmond Bane for the most triples in the conference with 64 or an average of 2.7 per game. Owning 180 career 3-pointers, Manek already ranks eighth in OU history for made 3-pointers. 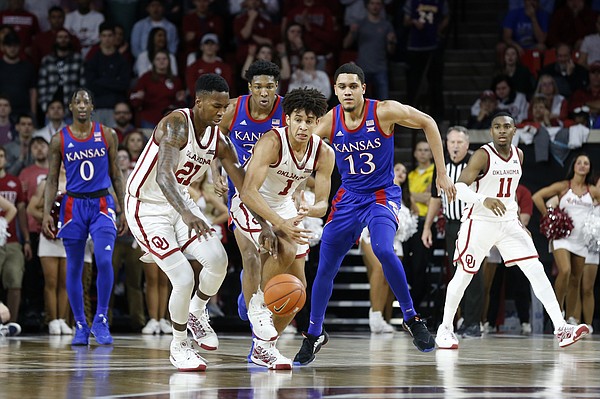 Oklahoma's Jalen Hill (1) and Kristian Doolittle (21) fight for the ball with Kansas' Chris Teahan (12) and David McCormack (33) during the second half of an NCAA college basketball game in Norman, Okla., Tuesday, Jan. 14, 2020. (AP Photo/Garett Fisbeck) by Associated Press

Doolittle has come out of a little slump to help the Sooners win back-to-back games.

Doolittle has strung together a pair of dominant performances by scoring 27 against West Virginia and 20 against Iowa State. The 47 combined points over his last two outings comes after Doolittle scored a total of 36 points over the previous five games.

In addition, Doolittle ranks seventh in the conference in scoring (15.0 points) and third in rebounding (9.0 boards). Doolittle is one of only three major-conference players averaging at least 15 points, nine rebounds and two assists. 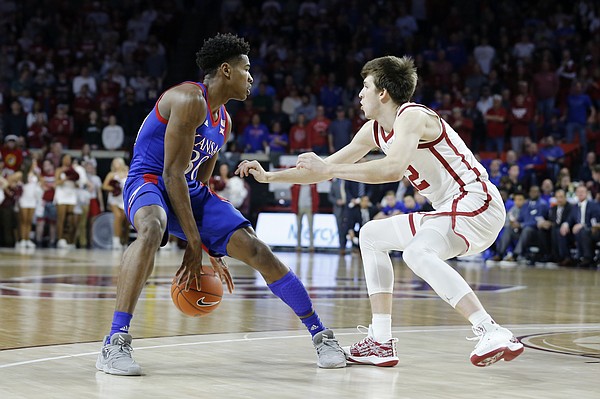 Kansas' Ochai Agbaji (30) is defended by Oklahoma's Austin Reaves during the first half of an NCAA college basketball game in Norman, Okla., Tuesday, Jan. 14, 2020. by Associated Press

Reaves has been one of Oklahoma’s leading offensive weapons during his first season with the team.

Reaves sat out the 2018-19 season after transferring to Oklahoma from Wichita State University. Reaves has hit the ground running , as he averages 14.2 points per game to rank 11th in the Big 12 and third among newcomers.

Reaves has reached 20 points on five occasions this season, including a career-high 23 points against UTSA on Nov. 5 and at Creighton on Dec. 17.

ONE THING OU IS GOOD AT

The Sooners won’t cough up the rock much in this showdown in Allen Fieldhouse. Oklahoma’s turnover rate of 15.4% ranks 11th in the nation, according to KenPom.

ONE THING OU IS BAD AT

Kansas should have the advantage on the glass, as Oklahoma has struggled to collect missed shots. According to KenPom, the Sooners rank 321st in the nation with an offensive rebound rate of 22.5%.

Before looking at the line, I was convinced that I would be taking the points in this one. I assumed it would be close to 14 or 15 points, similar to KenPom’s projection, and that seemed like a lot given KU could have a letdown after a big road win at West Virginia just a few days ago.

With Kansas being favored by just 11 points on FanDuel’s Sportsbook, however, that is enough to change my pick. Kansas won by 14 on the road on Jan. 14, and the rematch in Allen Fieldhouse should be just as easy.