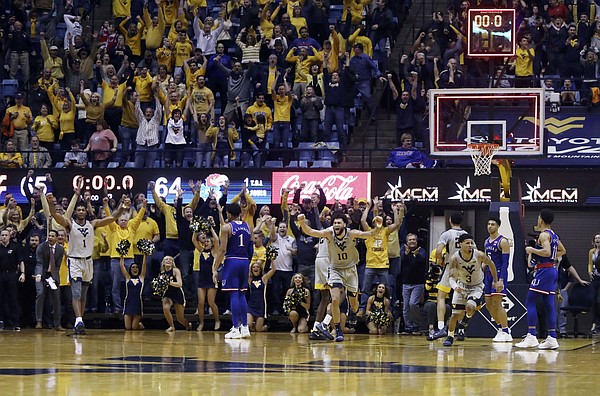 No. 3 Kansas will be put to the test with a road tilt tonight.

The Jayhawks will travel to take on the Mountaineers in a rematch from the Big 12 opener. KU recorded a 60-53 in the first meeting on Jan. 4 in Allen Fieldhouse, but the second showdown should be even more difficult.

West Virginia (18-5, 6-4 Big 12) is coming off back-to-back wins over Kansas State and Iowa State. The Mountaineers have been tough to beat at home, posting a 12-0 record in the WVU Coliseum. West Virginia is also dominating the boards, pulling down a conference-leading 41.4 rebounds per game with a plus-8.7 rebound margin

Though 10 games into the Big 12 season, Kansas (20-3) sits alone in second place at 9-1 in the league. Baylor is leading the way with a 10-0 clip, while West Virginia and Texas Tech are tied for third with a 6-4 record against league foes.

According to KenPom, Kansas has a 53% chance of victory. The projected score on his site is a 66-65 margin in KU’s favor.

Kansas has a 13-5 advantage over West Virginia in the overall series. However, KU is 2-5 against WVU in meetings in Morgantown with the Mountaineers claiming five of the last six battles at WVU Coliseum.

Tipoff is slated for 6 p.m.

The Jayhawks did a solid job of limiting Culver in the first meeting, but it might not be so easy the second time around.

Culver scored five points and finished with 12 rebounds in the Big 12 opener. For the season, Culver is averaging 10.8 points and 8.9 rebounds per game. Culver has reached double figures in rebounds in 25 of his 49 career games.

Only a sophomore, Derek Culver has been one of the most consistent big men in the Big 12 over the past two seasons.

Hear his story in this week's Life as a Mountaineer, presented by @PanhandleCR.#HailWV pic.twitter.com/M6CWo5UEAd

Tshiebwe caused problems for the Jayhawks last time out, especially in the first half.

That has really been the case for a lot of teams trying to contain the talented big man, however. Tshiebwe is averaging 11.5 points and 9.1 rebounds per game as a freshman, and has been named Big 12 Newcomer of the Week on three different occasions.

Tshiebwe’s rookie campaign shouldn’t come as a surprise, considering his pedigree as a prospect. He is just the second McDonald’s All-American to ever enroll at WVU as a freshman. Chris Brooks (1986) was the only other player to do so in program history.

Hear what he has to say in this week’s Life as a Mountaineer, presented by @PanhandleCR.#HailWV pic.twitter.com/1TrVWaQfGm

In last year’s meeting against the Jayhawks in Morgantown, Haley had the game winner for the Mountaineers.

Haley had his career-high in points with a 28-point effort against Iowa State, though he has been more of a scoring threat as of late. Haley has reached double figures in 21 of his previous 32 games for WVU.

JERMAINE HALEY DOES IT FOR WVU

None by Bleacher Report CBB

ONE THING WVU IS GOOD AT

Similar to Kansas and the other strong Big 12 teams, West Virginia has an elite defense. The Mountaineers rank third in 3-point defense (27.6%) and ninth in 2-point defense (42.7%) so far this season.

ONE THING WVU IS BAD AT

West Virginia hasn’t been efficient from deep or the free-throw line this year. WVU is shooting 30.3% from deep, which ranks 306th in the nation. The Mountaineers also rank 331st with a 64.3% clip at the charity stripe.

Kansas is getting 1.5 points on FanDuel’s Sportsbook as of Wednesday morning, despite KenPom giving a slight edge to the visitors. The atmosphere is going to be really good, and KU has obviously struggled to win in Morgantown for a reason.

But this defense has proven it is elite enough to win tough road games, and West Virginia doesn’t have enough offensive firepower to trust that side in this matchup. I’m taking the points in a KU win.