Getting to know: Texas Tech basketball 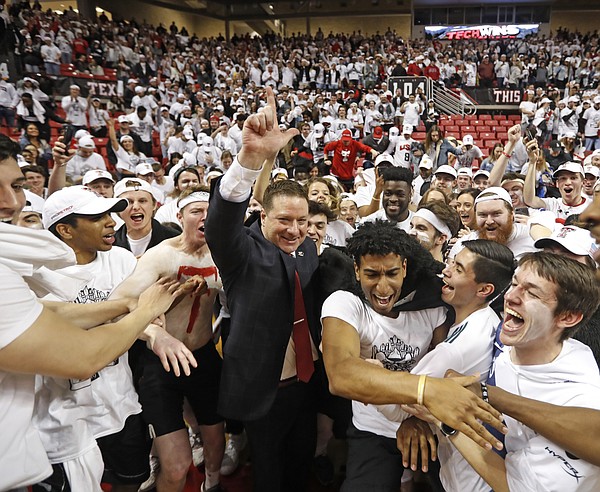 This matchup might have lost some of its luster, but it still figures to be an intriguing contest in a lot of ways.

Texas Tech, which already has three Big 12 losses on its resume, can prove it belongs in the top tier of the league with a win on Saturday. Kansas, meanwhile, can distance itself from the pretenders by taking care of business in Allen Fieldhouse.

KU (17-3, 6-1 Big 12) currently sits alone in second place in the league standings, one game behind Baylor. Entering this weekend, Texas Tech (13-7, 4-3 Big 12) is two games back of Kansas. The Red Raiders are tied for third in the conference standings with West Virginia and TCU.

TTU is coming off an 89-81 win over West Virginia on Wednesday night, where it matched a season-high with 11 3-pointers. Texas Tech has yet to win more than two games in a row since Big 12 play began.

KenPom gives Kansas an 86% chance of victory for this matchup. He projects the Jayhawks to win on Saturday by a 70-58 margin.

KU leads the series with Texas Tech, 35-6, including an 18-1 mark in Allen Fieldhouse meetings. Kansas may have won 18 of the last 20 matchups, but the series is tied at 2-2 in the last four battles.

Ramsey leads the Red Raiders and is sixth in the Big 12 in scoring with an average of 15.3 points per game.

For the fifth time through the first 16 games of his freshman campaign, Ramsey scored 20+ points when he posted a 21-point performance against WVU. Ramsey was an All-Big 12 Preseason Honorable Mention selection prior to the start of the season and then earned Big 12 Newcomer of the Week on Nov. 25 after his 27-point effort against Long Island.

Ramsey is averaging 14.1 points per game in Big 12 play and has also provided 23 steals and 11 blocked shots this season.

None by Jonathan Wasserman

Edwards earned Big 12 Player of the Week honors after averaging 23.0 points per game in a pair of wins over Kansas State and Iowa State.

During that stretch, Edwards went 5-for-6 from downtown against the Cyclones and poured in a career-high 24 points at Kansas State. Last time out, Edwards dealt with foul trouble and posted a season-low five points against West Virginia.

Edwards comes into the matchup against Kansas averaging 11.8 points, 4.5 rebounds and 2.9 assists per game. A reserve in all 38 games as a freshman, Edwards has started all 20 contests this season where he has recorded 11 double-digit scoring performances.

"I believe in him.. He's a team player.. he wants to win. I trust Kyler." - Chris Beard. pic.twitter.com/mv83AxlIWY

All Moretti knows is how to win, as Texas Tech has won 71 of the 95 games that he has played in.

The junior guard from Italy has made at least one 3-pointer in 18 of 20 games this season and in 70 of 95 games in his career. Moretti was named to the All-Big 12 Third Team as a sophomore last year.

"HE GOT ANOTHER ONE!"

Davide Moretti is having a moment. pic.twitter.com/lkqpZ7LRNf

None by CBS Sports

Texas Tech is coached by Chris Beard, who is 89-38 in his fourth season at TTU and 119-43 in his fifth season overall.

ONE THING TEXAS TECH IS GOOD AT

Texas Tech is still an elite defensive team, even if programs like Kansas and Baylor are getting more attention on that end of the floor this year. According to KenPom, the Red Raiders rank eighth in the country in adjusted defensive efficiency.

ONE THING TEXAS TECH IS BAD AT

TTU hasn’t taken care of the rock so far this season. Per KenPom, Texas Tech’s turnover rate of 20.1% ranks 237th in the nation. The Red Raiders also have a non-steal turnover rate of 11.5%, which is 287th in all of college basketball.

Both KenPom and Torvik project Kansas to win by a dozen, but KU is favored by just nine points on FanDuel’s Sportsbook. Despite what the computers say, I’m taking the points in this one. Chris Beard will have his team ready to play, especially on the defensive end. And I don’t think KU's offense will have the same success it had against Oklahoma State earlier this week.

You copied KUs record to TTU.