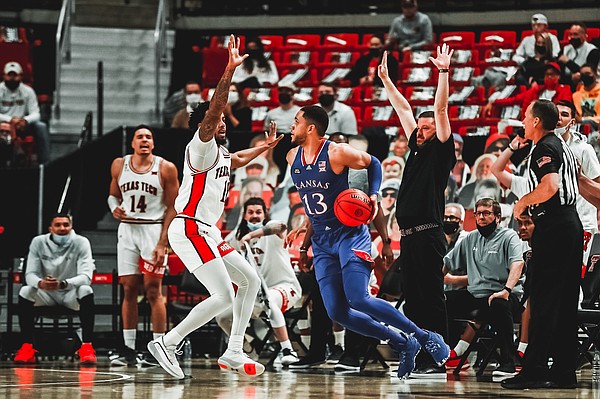 With the calendar flipping to January and a new year, the Big 12 race will take center stage as is usually the case during the first two months of every year.

Like most years, the Kansas men’s basketball team is expected to be in the mix for a league title. The Jayhawks have actually started off 2-0 in conference play, with a road win against Texas Tech and a home victory against West Virginia.

But this year’s Big 12 race figures to be as compelling as ever, with five different teams ranked inside the top-13 in the country in the latest AP poll. Because of that, I figured it would be interesting to monitor this riveting race on a regular basis.

Things will likely change a bunch over the next eight weeks, and the Big 12 stock report will help keep track of all that. In this blog, we will take a look at teams trending up and trending down as we continue to get more information over the next two months.

To help do that, I’m going to use KenPom’s projected Big 12 standings for the purpose of this blog. I think it will be interesting to see how certain results impact his projections.

So before all the Big 12 teams return to action on Saturday, let’s take a look at where the league stands after December.

*Please note that projected conference records may not sum to .500 due to rounding

These were KenPom’s projections for the Big 12 as of Thursday afternoon. For comparison, here is what KenPom had projected nine days earlier ahead of KU’s 79-65 win over West Virginia on Dec. 22.

There wasn’t much of a difference in the entire race based on the Dec. 22 games, but the Jayhawks managed to separate themselves from a strong tier of teams that includes West Virginia, Texas and Texas Tech.

How did KU do that exactly? Well, by picking up wins against two of those teams.

Baylor is deservedly the favorite, but the first week of league action really showed that KU is very much in the mix. Bill Self’s mastery really led to Kansas stealing a win on the road against Texas Tech in the Big 12 opener. KU then buried 16 3-pointers to run away from West Virginia at home.

Had Kansas gone 1-1 during that stretch, which was certainly plausible, maybe we’d be talking about how Baylor is the clear favorite entering January. The Bears probably still are the favorite, but I’m not so sure that it is as obvious as it was at the start of the season.

KU won’t face Baylor until Jan. 18, but it at least distanced itself from a good group of Big 12 squads. Kansas will face Texas next, and a win on Saturday could really give KU the inside track to making this a two-team race.

The Cyclones’ projection didn’t really change, but it is clear that this was not the start they had hoped for. For one, Iowa State suffered a 74-65 loss to Kansas State at home in the Big 12 opener. And that showing came exactly one week after K-State suffered a 81-68 loss to Fort Hays State.

ISU followed that up by dropping a 70-65 decision to West Virginia on the road. The Cyclones are now 2-4 on the year following a nonconference win over Jackson State. Needless to say, there is a lot of red (which means bad) on Iowa State’s KenPom page.

To make matters worse, Iowa State will have to face Baylor on Saturday in its first game back from break. The Cyclones will need to do a better job of taking care of the ball moving forward. They currently have a turnover rate of 23.5%, a number that ranks 297th in the country.

It is still obviously early, but four of the nine Big 12 games have been considered close on KenPom. That means four contests have either gone to overtime or have been decided by four points or fewer.

The 44.4% close-game percentage is the highest mark among all conferences. No other league has a higher rate than 33.3% thus far. Again, it is still early, but that number should illustrate why this will be a compelling conference race this year.

In Self we trust. I'm still confident that we can win the conference again.

I believe in the past we have been more successful when the conference is stronger; more quality teams. It seems a little counterintuitive - all things being equal. The reality is that all things are not equal and Coach Self and staff just give us such a great advantage in close games.

Why is Texas only slated to play 17 games when everyone else is playing 18 conference games?