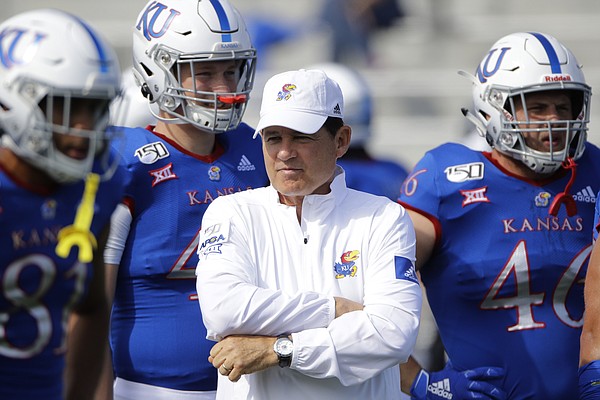 The Jayhawks have a lot of things going against them this week.

Kansas is coming off its first loss of the season, and a deflating one at that. After scoring on the opening possession, KU’s offense was unable to find any rhythm in a 12-7 loss to Coastal Carolina. It marked the Chanticleers’ first victory over a Power Five program.

Head coach Les Miles, and even some players, admitted that they should have won that game. It left a sour taste in their mouth. And it certainly was not what fans expected, considering the fact that Kansas opened a 10-point favorite in its Week 2 matchup.

Now, the Jayhawks will have a short turnaround for their first road game of the season. Kansas will travel to Boston College at 6:30 p.m. Friday. The odds are stacked against the Jayhawks, and the early betting line indicates that.

After tweeting out that Kansas opened as 18.5-point underdogs, my mentions were filled with people saying that number is too low. Turns out that Vegas agreed. The line has moved up, and was as high as 21.5 points as of Monday afternoon via FanDuel’s Sportsbook.

According to SP+, which is created by Bill Connelly of ESPN, KU has just a 19% chance of winning its first road game under Miles. My early thought on this game, though, is to take the points in this one. Honestly, I could change my opinion by the end of the week. I think Boston College does win this game easily, but I’d probably at least pick KU to cover if the line stays at 21+ points.

With that, let’s take a look around the rest of the Big 12 slate for any value on early betting lines via FanDuel’s Sportsbook as of Monday afternoon:

Kansas State (+7) at Mississippi State (Line via Sportsbooks in Vegas)

Much like KU’s line, this spread has moved a bit in 24 hours. But this line has shifted in favor of Kansas State, and I’m now more willing to pull the trigger. Kansas State might have 1,094 yards of total offense through the first two games of the Chris Klieman era, but this is going to be a tough test.

In 2018, the Bulldogs allowed just 4.1 yards per play and had the top-ranked defense via SP+. Even though they will likely take a step back this year, it will be interesting to see how Kansas State responds when the offense faces adversity for the first time. I’m good with giving up the seven points, I think this line should be closer to 10.5.

NC State hasn’t faced a Big 12 opponent in 16 years, when Philip Rivers played his final career game against Kansas in the Mazda Tangerine Bowl. A win would give the Wolfpack their first road win at a non-conference Power-5 school since 2002. Dave Doeren has NC State off to a 2-0 start, while West Virginia is 1-1 in its first year under Neal Brown. It might feel gross, but I'd lean taking the points in this one.

The Cowboys’ offense has been clicking to begin 2019, scoring at least 52 points in each of their first two wins. Tulsa is 1-1 after a pair of road games, including a 34-16 victory over San Jose State last weekend. OSU running back Chuba Hubbard leads the Big 12 in rushing thus far, as he has 265 yards and four touchdowns on 34 attempts. This line seems about right, but I’d take Oklahoma State to cover if you made me pick.

All eyes will be on this one, as ESPN College GameDay makes its first appearance at Iowa State. Iowa, which is ranked No. 19 in the AP Poll, won this meeting last year by a 13-3 margin. The Cyclones have had time to prepare for this one after a bye last week. Iowa State squeaked by Northern Iowa with a 29-26 victory in triple overtime in Week 1. This should be a fun one.

TCU (+2) at Purdue (Line via some Sportsbooks in Vegas)

The Horned Frogs are 1-0 after a 39-7 win over Arkansa Pine Bluff in Week 1. The Boilermakers (1-1) bounced back this past weekend with a 42-24 home victory over Vanderbilt. Even though this is TCU’s first road test, Gary Patterson should have this squad prepared. TCU’s 39 road wins since 2009 are third in the nation. The Horned Frogs are 39-14 in that stretch. Give me TCU.

Senior quarterback Jalen Hurts has 814 total yards through his first two games with the Sooners. He even ranks second in the Big 12 in rushing with 223 yards on the ground. Oklahoma holds the nation’s longest current true road game win streak at 20. UCLA, meanwhile, is 0-2 to start the year in Chip Kelly’s second season. I’m tempted to give up the points and watch the Sooners roll.

I jumped on the initial line for the Texas/LSU game last week, which was 5.5 points. That game certainly lived up to expectations, and I’m not as inclined to keep fading the Longhorns. I’m not touching this current line, but I wouldn’t be surprised if the Longhorns ran away with this one to get back in the win column. Texas quarterback Sam Ehlinger is 59 of 85 for 677 yards and eight scores through two weeks.

Texas Tech hasn’t exactly been tested yet. The Red Raiders have a 45-10 win over Montana State and a 38-3 victory over UTEP to begin the Matt Wells era. Arizona, on the other hand, has a 45-38 loss to Hawaii and a 65-41 win over Northern Arizona. The early defensive struggles by Arizona does make it it easy for me to pick Texas Tech to cover.

I'm surprised KU's chances of winning are that high. A 19% chance of victory seems much higher than normal for that big a spread. I mean after all, do 1 out of 5 21-point underdogs really win their games?

That being said, I hope they're right. That at least gives me some hope that KU can make a much better showing this week.