Puzzling 4th down decisions doom Jayhawks in loss to Chanticleers 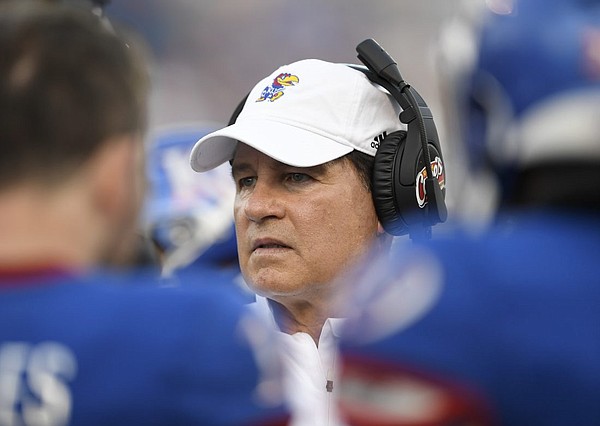 It was a game of chess early in the fourth quarter during Kansas’ 12-7 loss to Coastal Carolina on Saturday night at David Booth Kansas Memorial Stadium.

After back-to-back-to-back timeouts, the play finally happened. And the result was anticlimactic.

Redshirt senior Carter Stanley scrambled to his right, but the Chanticleers were all over him. Stanley lunged for the necessary yardage when he met defenders, though he was nowhere near close enough to net a first down.

“I was trying to make a play for this team,” Stanley said. “I scrambled, and I unfortunately came up short. It was too bad.”

While the Jayhawks would get one more opportunity in the final period, that specific play highlighted what ultimately plagued them in their defeat. It illustrated why Coastal Carolina earned its first-ever victory over a Power Five program, despite KU having its most important player back in Week 2.

Kansas was trying to get the ball to Pooka Williams Jr., who had a touch on 42.8% of the team’s plays in his first game back since serving a one-game suspension in the season opener. Williams accounted for 39.6% of KU’s 280 yards on offense.

Following a 1-yard loss by Williams, KU faced a fourth-and-4 at the 14:22 mark. That’s when Miles called the first timeout with the play clock winding down. The Jayhawks opted to not kick, as freshman kicker Jacob Borcila missed a 40-yard attempt to close the first half.

After the timeout, Kansas went to the I-formation with the lone receiver, Andrew Parchment, split out wide to the left. So that’s when Coastal Carolina decided to call a timeout.

KU then came back out in the same formation, while Coastal Carolina shifted its linebackers and safeties more toward the middle of the field. One defensive back remained on Parchment, who was the lone receiver. Miles then chose to burn his third and final timeout of the second half.

“We kept the same play call,” Stanley said. “We go out there and we have a bunch of guys to the side we were trying to run to and it wasn’t a good look.”

Left photo: KU's formation before a Coastal Carolina TO on 4th-and-4 early in 4Q.

Right photo: KU's formation after TO, which then resulted in a timeout called by #kufball pic.twitter.com/ykk6nhwxVR

It took a third timeout for Kansas to switch up its look. Parchment was lined as the lone receiver on the right side. Stanley initially appeared to line up under center, but moved back to shotgun. When he moved back, Williams motioned to the right.

“They had an alignment that would not have benefitted us, so we immediately took a timeout,” Miles said. “(We) felt like we had a good call, a better call, so we went with it, and it didn’t turn out that way.”

Williams remained the target, as Stanley rolled right. Parchment ran an inside route, while Williams ran a flat route toward the sideline. It is a similar play to what many teams use in the red zone, when they utilize some sort of rub action between two different receivers.

But the play didn’t go as planned. Williams received a ton of contact off the line from redshirt freshman linebacker Cincir Evans, and his route never had a chance.

“It was a tricky situation for me,” Stanley said. “If I throw that in the time he’s being tackled, who knows if they call it. At the same time, I’m not trying to bank a fourth-and-3 play on the refs.”

Stanley’s only other option was to take off running, something he neglected to do on his previous two interceptions, when he was forced out of the pocket. Stanley couldn’t convert, and the play essentially sealed KU’s fate.

“There was a couple things we were trying to do and get to Pooka, and Pooka did everything he could,” Miles said. “They didn’t hook up at times, and obviously that changes the outcome.”

The multiple timeouts could have been because Kansas didn’t have a passing play it trusted with the game on the line. Stanley went 13-for-19 for 107 yards and two interceptions against a defense that allowed Eastern Michigan’s quarterback to complete over 90% of his passes in Week 1.

However, that doesn’t completely excuse the coaching staff. After all, Kansas went 0-for-3 on fourth down in its first loss under Miles.

One drive earlier, which took place midway through the third quarter, KU turned it over on downs on the Chants’ 41-yard line. The previous seven plays, five of which were runs, all gained yardage. On fourth-and-1, though, Kansas got too cute by trying a double reverse. Parchment was stuffed for no gain.

KU’s last drive also resulted in another turnover on downs. Needing 3 yards, Kansas handed the ball off to Williams. He ended up 2 yards shy of the first down.

Of course, not one single person is responsible for any of these three fourth-down failures. Multiple factors prevented Kansas from converting when it needed to against Coastal Carolina.

Still, for a program that has experienced its fair share of puzzling moments over the last decade, Saturday’s showing proved that this thing won’t be turned around overnight.

Should have never gotten to 4th and 4 to decide the outcome. This team has not been prepared to play D1 football.

That’s a 34 yard field goal attempt with lots of time left in the game. They are 1-3 on FG’s having made a 36 yarder. Unless you have no faith in your kicker why would you go for it on 4th and 4?

We are not talent deficient against Coastal Carolina.

We obviously were QB deficient. Not having a passing game led to calling only run plays and that just doesn't work.

The headline is weak, weak, weak. We scored 7 on the first drive and never scored again. That’s the problem.