KU football opens as a 35-point underdog against No. 6 Oklahoma 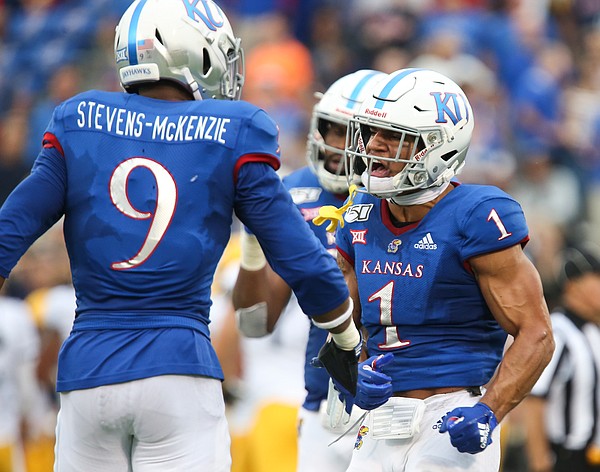 The Sooners are averaging 55.5 points per game through four outings, which ranks second in the nation. Oklahoma had defeated all four of its opponents — Houston, South Dakota, UCLA and Texas Tech — by at least 18 points. OU actually has won its last three games by an average of 43 points per contest.

Last week, No. 6 Oklahoma wasn’t really challenged en route to a 55-16 victory over Texas Tech in the Big 12 opener. With a road tilt at Kansas up next, it is unlikely that OU will be challenged once again.

The Sooners opened as 35-point favorites via FanDuel's Sportsbook for this week’s game with the Jayhawks, which will be played at 11 a.m. Saturday at David Booth Kansas Memorial Stadium. Kansas (2-3, 0-2 Big 12) is coming off a 51-14 road defeat at TCU.

KU has dropped 14 consecutive meetings in this series, and has lost by at least 37 points in four of the last five meetings. Still, it is worth noting that last year’s 55-40 defeat in Norman, Oklahoma was the lone exception.

Five touchdowns seems like a lot to lay, but my early inclination is to pick Oklahoma to cover in this one. And I believe the key reason for that is because Oklahoma’s ridiculous run offense should its way with KU’s run defense.

With that, let’s take a look around the rest of the early betting lines within the Big 12 conference via FanDuel's Sportsbook:

In last week’s blog, I suggested picking OSU to cover against Kansas State before the line moved. Once again, I’d recommend taking Oklahoma State while the line is under 10 points. Even with a young quarterback, the Cowboys simply have too many weapons on offense for the Red Raiders to compete.

OSU running back Chuba Hubbard is averaging 187.6 yards per game on the ground, which is over 50 yards better than the next-best rusher in the Big 12. And most of his yards are of his own doing.

Chuba Hubbard was electric with the ball in his hands on Saturday! pic.twitter.com/o6W53ozsOh

It is important not to overreact too much over the course of the football season. Iowa State’s comeback bid fell short in a 23-21 loss at Baylor this past weekend, but all is not lost. ISU could easily be back in the mix with a win this weekend, as it travels to West Virginia and Texas Tech over the next two weeks. Of note, ISU is 7-0 over the last two years in the month of October.

The Horned Frogs, meanwhile, are coming off a blowout win against Kansas. Then again, how much can you really take from that performance? This is probably the most intriguing Big 12 game of the weekend, but I don’t feel comfortable betting on either side. If you made me, I’d lean Iowa State in this one.

Pick: Stay away (ISU if you make me)

Both teams are coming off a bye week, so this game obviously should be even. This weekend marks the second time that the Mountaineers will be a double-digit underdog this season. On the first occasion, WVU suffered a 38-7 loss to Missouri in Week 2.

The analysis for this game is pretty simple: Texas is good, West Virginia is not.

At one point, Kansas State was considered four-point favorites over at Circa. If the line was ever around 3.5-4 again, I’d recommend taking the points in that case. At this current line, though, I’d prefer to stay away.

Baylor is coming off a big win over Iowa State, while Kansas State dropped a road decision at Oklahoma State in a game that featured a weather delay. The Bears could be in for a letdown, while the Wildcats might find more rhythm at home.

I do think the Bears are the better team, but this does have a weird feel to it.

OU is a 35 pt favorite, but what about the second half?

What fool would place a bet when we should be wagering on who else is going to redshirt or not show up?