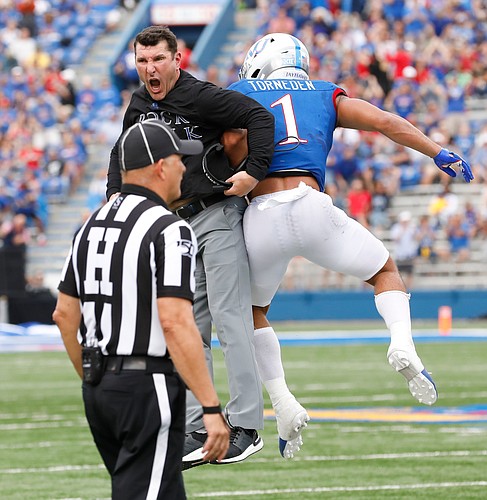 Kansas safety Bryce Torneden (1) and special teams coach Mike Ekeler get airborne as they celebrate a missed field goal by the Mountaineers during the second quarter on Saturday, Sept. 21, 2019 at David Booth Kansas Memorial Stadium. by Nick Krug

During KU’s 29-24 loss in the Big 12 opener, West Virginia essentially wrapped things up on its 81st offensive play of the afternoon.

On third-and-5, WVU running back Martell Pettaway darted through the Kansas defense for a 7-yard touchdown run. Not a single KU player got a hand on Pettaway, who gave the Mountaineers a 29-17 advantage with 5:04 left in the game.

True freshman linebacker Gavin Potter had a chance to make the play, filling the correct gap. He was just too early.

“This is where you miss (Dru) Prox,” color commentator Mike Golic Jr. said on the ESPN+ broadcast at the time. "Gavin Potter in position to make the play, runs right past. Can’t even get a hand on the running back.”

Prox suffered an injury earlier in the game, but that was merely part of the problem.

KU’s defense was simply asked to do too much in the narrow defeat. Although there were many times the unit answered the call, West Virginia’s 19 second-half points came against a tired defense.

“It is Big 12 football; it is going to be challenging at times,” KU senior Bryce Torneden said. “I didn’t feel like it was a longer game than usual.”

However, West Virginia’s last scoring drive illustrated that the number of snaps finally took its toll on the Kansas defense.

One possession earlier, KU’s defense came through in the red zone to force a field goal following a 12-play drive by WVU. The stop kept it a one-score game. Four plays later, though, Kansas quarterback Carter Stanley threw an interception and the visitors took over at midfield.

The Mountaineers proceeded to run 11 more plays, seven of which gained at least 6 yards. Kansas had to use one of its timeouts to even give the players a chance to catch their breath.

“The guys on the defense, we kind of name ourselves the fire extinguisher,” Torneden said. “We have to put the fire out when things might be looking bad. We put the fire out, just do our job and get them off the field.”

For the most part, the Jayhawks did just that when they needed to. West Virginia scored on only one of its first six possessions of the game. During that span, the Mountaineers were held to 155 yards on 39 plays.

WVU then scored on five consecutive drives, including a pair of touchdowns. West Virginia recorded 250 yards on 46 plays during those five possessions. The Jayhawks will have to sustain more offensive drives in order to not put their defense in that position again.

Still, despite all of that, KU’s defense has done its part through four weeks. Coastal Carolina has scored a total of 108 points in its last two games following a 12-point showing against Kansas in Week 2. Boston College also scored a season-worst 24 points against KU in Week 3.

Yet the key for the Jayhawks will be not asking their defense to do too much again.