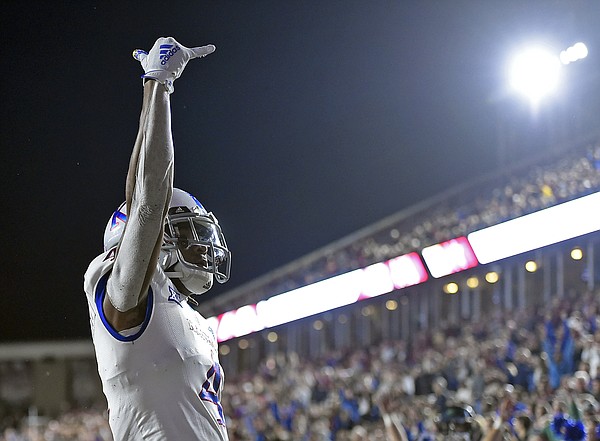 (Boston, MA, 09/13/19) Kansas Jayhawks wide receiver Andrew Parchment (4) celebrates a touchdown against the Boston College Eagles during the first half of an NCAA football game at Boston College in Boston, Mass., on Friday, September 13, 2019. by Chris Evans

Let’s get a little weird this weekend.

That is the overall mindset for the fourth edition of this blog, because a few of these picks might seem a bit puzzling when you read them. Honestly, I had to think twice about actually writing down some of these picks. After all, things never truly die on the internet.

That being said, be prepared for a wild weekend if you are following along with any of these bets. We will have money on the worst team in college football. We will be betting on a bounce back by Boston College, a team that just got pummeled at home by Kansas.

As is the case every week, the KU sports staff also picked six games against the spread. Those picks, as well as the season standings, can be found at the bottom of this blog. It was my first weekend below .500 in Week 3, but I’m ready to get back on track.

With that, let’s dive into my six tips for Week 4 of the college football season:

I just don’t think Boston College is as bad as it was last week against Kansas, and I fully expect BC to respond this week behind a strong run game.

It might not even matter that the Eagles clearly have defensive issues. Art Sitkowski, who threw three interceptions against KU in 2018, is slated to start this game at quarterback for Rutgers. Sitkowski has 19 interceptions in 12 career games.

Admittedly, the long shot bet has been my worst call through three weeks. And that’s probably the point, because I’m taking chances on teams that have no shot of winning the game given the spread.

So let’s have some fun shall we?

Look, I got the luxury of watching Coastal Carolina in person and that team has no business being a 17-point favorite on the road. I understand that UMass is the worst team in college football. I still don’t care. This seems like a lot of points, and nothing else has seemed to work for my long shot bet.

Just let me root for the Minutemen.

Over the last three years, Michigan State has been favored by an average of five points in this Big 10 clash. Northwestern has won all three meetings by at least eight points.

The Wildcats are coming off their first win of the season, while the Spartans dropped a 10-7 decision to Arizona State. This just seems like a lot of points to give up considering the recent history of these two teams.

I’m taking the points, and I’d consider putting something down on the moneyline as well.

I’m going to recommend betting the over on this one purely for entertainment purposes. Why not root for this game to have 100 total points? It will be fun, and these two offenses can surely light up the scoreboard.

Plus, given my under pick (see below), this game will be way more fun to be invested in. OSU is averaging 49.33 points per game this season, while Texas is producing 43.6 points per contest. These two teams could put on a show Saturday night, and I really hope they do.

Under of the week: California at Ole Miss (41.5 total points)

This total is low, but it will feel great when it hits this weekend. These two teams will rely on their defense and lean on the ground game on the offensive end. Ole Miss running back Scottie Phillips leads the FBS in rushing attempts with 71. Cal running back Christopher Brown Jr. ranks fifth in the FBS with 66 rushing attempts.

Put it at whatever total you want, I’m taking the under in this one.

It has been a slower start to the season for Reagor, who is arguably TCU’s top NFL prospect. He has just eight catches for 100 yards in 2019.

Last season, Reagor caught 72 passes for 1,061 yards and nine touchdowns. He finished with four receptions for 53 yards and a touchdown against SMU, which is the team TCU will face this week.

(Lines via FanDuel's Sportsbook as of Tuesday afternoon)

Kansas vs West Virginia. I guess you guys don't learn very easily. Probably, due to your hanging with TK , all those years. Here is what Coach Miles told us: 1) When you become emotionally close to your teammates, you will do whatever to help them. (think vietnam military) 2) Those areas that use up fast twitch muscle energy, like sprinting 100 meter dash every 5 minutes, are going to be platooned to conserve energy and stamina. 3) The back up, platooning personnel, have and are continually taught techniques, they just need more reps. 4) 'I like my team'! There is no other option, to get them to play better, and win. You saw the psychological effect of Charlie Weis, saying he felt bad about the product he was putting on the field. You also saw the effect of the continual berating of Coach Beatty by TK. The most wonderful thing is when Ferguson touched Stanley with 'We're riding with you, Trust me. You are good, We're with you'. There is not other choice if you want to be successful.

BC got toasted last week for the same reason we were embarrassed 2 weeks ago; the total absence of a passing game. In our case it was self inflicted. BC has next to nothing except for sucking the D in with their pounding to spring someone lose over the top but it is a 50/50 shot and defensible once known.

WVU is the polar opposite. They have QB & receivers but virtually no running game. Their passing game hasn’t been as good as ours and definitely not good enough to make up for the lack of running game.

I certainly hope you are wrong about Coastal, though it’s still nice to not appear in the bottom 10 and even help to send others there.