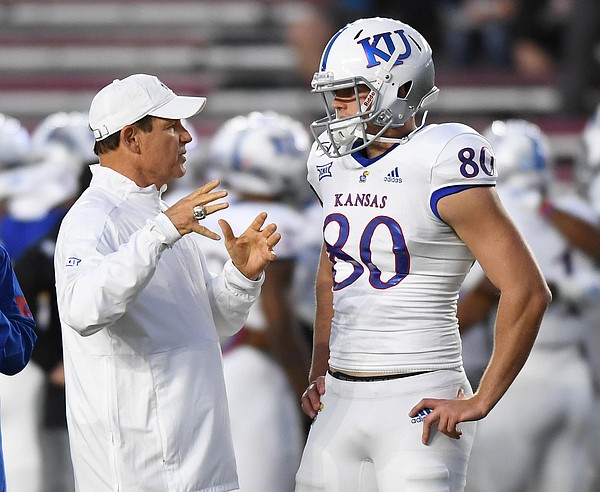 The massive overreaction on a weekly basis might be my least favorite thing about my favorite sport.

Because there is a week-long gap between football games, most of our time is devoted to analyzing what happened in the previous contest and how that will impact the upcoming outing. But the simple truth is that the sample size for a football season — especially in college football — can be incredibly small.

As a result, weird things are going to happen on a weekly basis that will cause some level of overreaction by both fans and media members. See, I'm part of the problem.

Look no further than the Kansas Jayhawks during the 2019 nonconference season. Nobody was giving KU a shot when the Vegas line opened up at 18.5 points for its road contest at Boston College. As I mentioned last week, my Twitter mentions were telling me that the line was too low.

That type of reaction was because Kansas had just suffered a 12-7 home loss to Coastal Carolina. KU’s offense looked lethargic through two weeks, scoring a total of 31 points and averaging 5.24 yards per play through the first two games of the season.

And then the Jayhawks shocked everybody by rolling to a 48-24 victory over Boston College last Friday. Kansas averaged 7.9 yards per play, something this team has only done one other time in this decade when it averaged 8.2 yards per play against Oklahoma last year.

Because of last week’s offensive explosion, the sentiment around this team has changed. When Kansas opened as seven-point underdogs against West Virginia, the common response by fans was to put the money on Les Miles and company.

That forced Vegas to adjust its line less than 24 hours later, and KU is now just 4.5-point underdogs as of Monday afternoon via FanDuel’s Sportsbook for the Big 12 opener. West Virginia (2-1) is coming off a 44-27 win over NC State.

I’m not here to tell you if the response is warranted or not. To be honest, I’m having a tough time gauging how this game is going to go. I’m hoping that I have a better feel for this line after rewatching the tape for both teams this week. My early guess is that I will be laying the points, and taking WVU at this current line.

What I do know is that this type of overreaction, at least from the mindset of fans and media, is pretty common in this sport. But it might be a new feeling for a team like Kansas, which hasn’t won more than three games in a season since 2009. I think that is a positive sign.

With that, let’s take a look at the rest of the early betting lines around the Big 12 conference:

ULM might have felt better about this one had Iowa State not lost to Iowa, 18-17, for ESPN’s College GameDay tilt. The Warhawks (1-1) are coming off a bye, while the Cyclones could be looking ahead to their Big 12 opener next week.

In 2018, Texas A&M lost by two points to eventual national champion Clemson before trouncing ULM by a 48-10 margin the following week. Ole Miss rolled over ULM for a 71-20 win last October one week after falling at LSU. The Cyclones (1-1) might want to crush the Warhawks to head into conference play with some momentum.

TCU coach Gary Patterson hasn’t labeled true freshman Max Duggan the starting quarterback, but that move could be made this week. He took all but one snap in the second half of TCU’s 34-14 win at Purdue. Duggan is 23 of 41 for 235 yards and two scores, while Alex Delton is just 11 of 28 for 124 yards.

With the quarterback situation up in the air, though, I’m not a fan of betting this current line. SMU is 3-0 for the first time since 1984.

This line has moved after Baylor opened up as a 28-point favorite Sunday afternoon. ESPN gives the Bears a 95.6% chance to win this game. Rice has been outscored 103-41 in its 0-3 start, which includes a 35-point loss to Texas. Baylor is 2-0 and coming off a bye week, so this one could be ugly in a hurry.

This game figures to be the most entering within the Big 12 conference this weekend. The Cowboys (3-0) are top-10 nationally in several offensive categories behind junior receiver Tylan Wallace and sophomore running back Chuba Hubbard. Texas (2-1) has also scored at least 38 points in each of its first three games.

Since 2010, Oklahoma State has won seven of its nine meetings with Texas. The Longhorns have lost four consecutive games against the Cowboys in this series. I’m probably taking the points in this one.

Before the surprising and outstanding performance against BC (still wonder if KU held back showing much of their offensive playbook against Coastal Carolina in preparation for BC), West Virginia was my only pick remaining to get KU to 2 wins for the entire season. Unfortunately, WVU will not take the Jayhawks lightly after last week's game. Here is hoping KU can go to 3-1 under Miles! Rock Chalk.