Getting to know: Boston College football 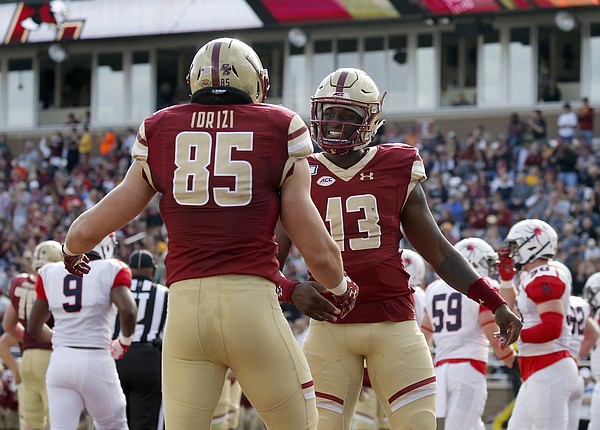 Boston College quarterback Anthony Brown (13) celebrates with tight end Korab Idrizi (85) after connecting for a touchdown during the first half of an NCAA college football game against Richmond, Saturday, Sept. 7, 2019, in Boston. (AP Photo/Mary Schwalm) by Associated Press

There are a lot of things working against the Kansas football team this week.

Kansas is coming off its first loss of the season after suffering a 12-7 home defeat to Coastal Carolina. The Jayhawks will now look to move on, and do so quickly, when they head out for their first road game under head coach Les Miles. KU will travel to Boston College at 6:30 p.m. Friday.

The visitors haven’t been given much of a shot to win this game. According to SP+, created by Bill Connelly of ESPN, Boston College has an 89% chance of winning this game. The Eagles are projected to win by 21.1 points. As of Thursday afternoon, KU was considered 21.5-point underdogs.

Boston College looks to start the season 3-0 for the second consecutive year following a 35-28 win over Virginia Tech and a 45-13 win over Richmond. This will be the first-ever meeting between these two teams.

The game will be broadcasted on ACC Network, which can be found via streaming services like YouTube TV, Hulu Live TV, PlayStation Vue and Sling.

Quarterback — Through two games, Anthony Brown has 438 yards and five scores on a 23 of 40 effort through the air. Brown is not afraid to go deep, as he is tied for the national lead with three passes covering 50+ yards in 2019. The Eagles are averaging 18.6 yards per completion thus far, which ranks seventh in the nation. In terms of passing efficiency, Boston College is 20th in the country as a team with a clip of 176.86.

Running backs — In 21 games since AJ Dillon was named the starter at running back on Oct. 14, 2017 at Louisville, Boston College is 14-7 overall. Since then, Dillon is second nationally with 133.2 rushing yards per game. Dillon is sixth nationally and leads the ACC with 2,864 career rushing yards. As a team, the Eagles are 20th in rushing offense (251.5 yards per game) through two weeks.

Receivers — Brown’s five touchdown passes in 2019 have been to five different players, including a pair touchdown passes to two wide receivers in Zay Flowers and Kobay White. On the first drive of the season, Flowers flashed his potential to all of college football. He started things off with a 16-yard run and ended the possession off with a 33-yard touchdown reception. BC has totaled 730 yards of total offense in the first half through two games.

Offensive line — Kansas, which is averaging three sacks per game, will have a tougher time getting to the quarterback this week. As a team, BC allowed zero sacks and zero QB hits in the win against Richmond. The starting offensive line combined to allow just two total pressures, meaning Anthony Brown was under pressure on just 18.8% of his dropbacks.

Linebackers — Sparacio, the only new starter in the linebacker unit, recorded six tackles and his first career interception in the season opener. He picked off a pass in the end zone to end a scoring threat near the end of the first half. Boston College mostly operates out of a four-man defensive front, so the starting linebacker unit includes redshirt juniors John Lamot (MLB) and Max Richardson (WLB).

Secondary — Boston College’s three-interception performance against former Jayhawk Ryan Willis in the season opener should come as no surprise. Since the start of the 2017 season, Boston College is second nationally with 41 interceptions. The Eagles, who currently rank second in the country in interceptions (5) this season, run a lot of Cover 2 as a defense.

VEGAS SAYS… After opening as 18.5-point underdogs, the line has moved up against Kansas. The Jayhawks were considered 21-point underdogs as of Thursday afternoon with an over/under of 51 total points.

At first, I was tempted to take the points. But because KU’s offense has produced just three touchdowns through two games, I can’t count on the visitors keeping this within three touchdowns in its first road game of the year. Give me Boston College to cover in a game that could get ugly.

I'm thinking the 3 will be first half. The 7 late in the game. Hope I am wrong.

Thank goodness the game is not on TV.

Why in the hell was this game ever scheduled?? Given we face several teams like this in the Big XII every year, every effort should be made to schedule winnable games...and this isn't one..in the non-conference portion of the schedule.